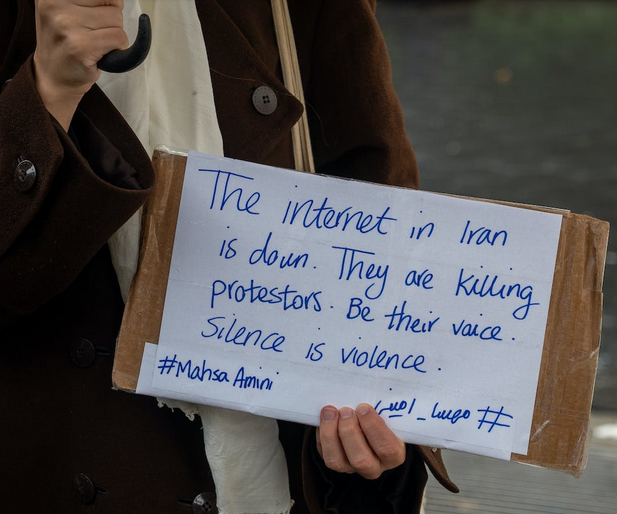 [A sign held by a protestor which reads, "The Internet in Iran is down. They are killing protestors. Be their voice. Silence is violence." Image courtesy of Pexels.com

Iranian citizens are revolting against the Government of the Islamic Republic of Iran in what many are calling a feminist revolution. On Sept. 16, Mahsa “Zhina” Amini, a 22 year old Kurdish woman, died from her injuries after being beaten by morality police in Tehran after allegedly wearing her headscarf improperly. The “morality police” enforce Iran’s mandatory head covering laws, which state that all women in Iran must wear a hijab or other government-approved head covering.

The Iranian government claimed Amini died of a heart attack, yet several witnesses have stated that they saw Amini get beaten, and her family has stated they believe she was beaten as well. Since Amini’s death, thousands of citizens have been protesting for the abolition of the regime by taking to the streets, burning their hijabs, cutting their hair and chanting for an end to the rule of Supreme Leader Ayatollah Ali Khamenei. One of the most influential protest chants is the Kurdish phrase: “Woman, Life, Freedom.”

Since the 1979 Iranian revolution, the Iranian government has enforced several fundamentalist Islamic laws, including the mandatory hijab laws which killed Amini. In 1979, the country became an Islamic theocracy after a coup-d’etat which overthrew the Shah, a secular monarch who was criticized by opponents for excessive wealth, autocracy and allyship with exploitative Western powers including the United Kingdom and United States. After the exile of the Shah, then-Supreme Ruler Ayatollah Ruhollah Kohmeini ascended to power, establishing a theocracy based on the principles of Shia Islam. Though several protests of the regime have occurred between 1979 and 2022, such as in 2009, 2017 and 2019, the protests occurring in the wake of Amini’s death have been the longest sustained act of resistance yet.

Since Amini’s death in September, protesting has continued all over Iran with footage being posted on social media. On Nov. 17, protestors allegedly set fire to Khameni’s ancestral home. Videos of the incident circulated on social media, though the Iranian media has denied that this has occurred. Additionally, videos of Iranian protestors chanting, “Death to the dictator,” have also made rounds on social media, along with videos of women cutting their hair in solidarity with Iranian women.

The Iranian government has responded to the protesting with excessive force, including beatings, tear gas, arrests and a nationwide Internet blackout.  According to Human Rights Activists News Agency (HRANA), 408 protestors have been killed due to the violent response, including 16-year-olds Nika Shakarmi and Sarina Esmailzadeh and 12-year-old student Mohammad Rakshani.

Recently, a rumor on social media spread that the Iranian government was going to execute its approximately 15,900 detained protestors, with this information being spread by a variety of celebrities and political figures. However, this rumor is not fully accurate. While the Iranian parliament did advocate for the death penalty for protestors, discretion ultimately comes down to Supreme Leader Khamenei, who as of Nov. 18 has not ordered the executions. Yet, according to a statement released by the United Nations (UN) on Nov. 11, eight people in Tehran alone were charged with protest-related crimes which are punishable by the death penalty. The UN condemned the act of execution, stating that women protestors were more likely to be unjustly charged.

“With the continuous repression of protests, many more indictments on charges carrying the death penalty and death sentences might soon be issued,” the UN wrote in the Nov. 11 statement. “We fear that women and girls, who have been at the forefront of protests, and especially women human rights defenders, who have been arrested and jailed for demanding the end of systemic and systematic discriminatory laws, policies and practices might be particularly targeted.”

In addition to women being targeted, several Iranians of marginalized ethnicities have been disproportionately affected by the government’s response to the protest. For example, the regime’s response in regions of Iran with large Kurdish populations have been particularly strong. In fact, Amini herself was a Kurdish woman.

Internationally, protests have occurred in solidarity with Iranian women in Berlin, Washington D.C. and Los Angeles. As Iranians continue protesting against the regime, the eyes of people and organizations all over the globe will be on the nation.