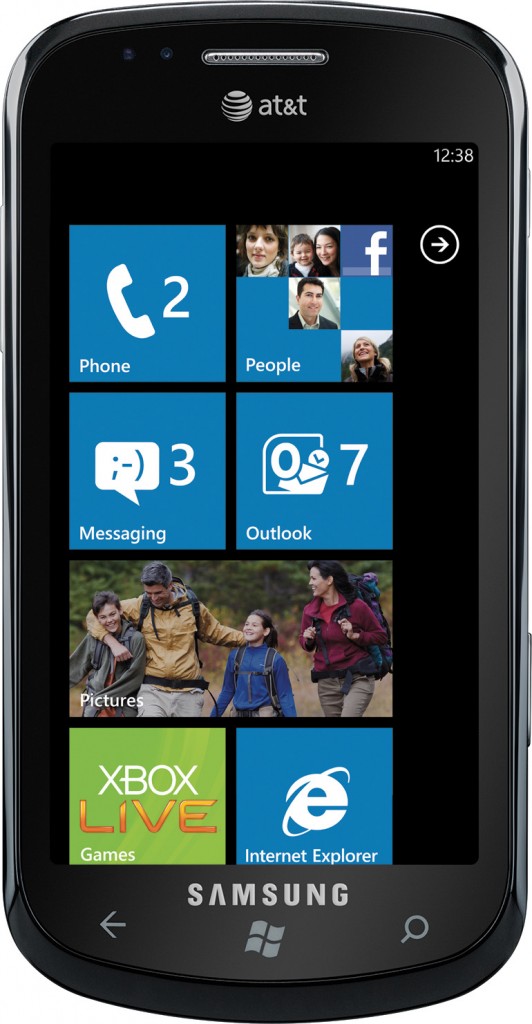 With a 4 inch multitouch display, 5 megapixel camera and Super AMOLED screen which provides vibrant colors and rich contrast even in bright sunlight, the Samsung Focus is one of the front runners in the Windows Phone 7 launch device lineup.

Apple, Google and Research In Motion (makers of the BlackBerry) have been the major players in the smartphone arena, but tech titan Microsoft is now stepping back into the ring. Microsoft launched its Windows Phone 7 devices on Nov. 8 and the Catalyst is here to cut through the technical minutiae and highlight how it’s different from the rest.

People are bound to be staring intently at their phones in the gym, on the bus or walking from point A to point B. Microsoft is using an ad campaign showing users going about their lives never looking up from their devices hoping to capitalize on the ire smartphones receive for being so engrossing. “It’s time for a phone to save us from our phones,” according to Microsoft. Windows Phone 7 is targeted to those who want to use their phone, not fight with it or become wrapped up in it. They hope that some will identify with this sentiment and look to Windows Phone 7 for the solution.

With simplicity and ease of use as its core principle, Microsoft has created an interface that hopes to let users get what they need and get out quickly — no mess, no fuss. Based on the Zune “Metro” interface, the Windows Phone 7 start screen is a minimalist pane of tiles that shuns elaborate graphic design in favor of a few simple images and clear, crisp typography. The interface is navigated by swiping the start page up, down, left and right. The result is a sleek interface that acts as a command center of sorts with easy access to e-mail, the Internet, music, pictures and more.

Microsoft has dubbed some interface tiles “hubs” to features such as social networks. While users can tap on the “People” hub to read all of their friends’ Facebook updates, the tile itself will display a stream of information directly from Facebook without having to be opened. Users can customize their start screen to their liking by rearranging tiles and even dedicating them to stream Facebook updates from particular friends.

Microsoft has implemented its Xbox Live online gaming platform into Windows Phone 7 as well. With its own dedicated tile, Xbox Live allows users to take a look at their gamerscore, message friends and even challenge them to games. Users can also view their avatar and their list of game achievements.

Those inclined to play games from popular franchises such as Guitar Hero 5 and Crackdown 2 in addition to independently developed titles, can download them from the Marketplace hub directly to their phone. Microsoft currently has plans to add at least 30 games to its marketplace. Also available on the marketplace are applications much like those on the iTunes App Store. Apps currently available for the Windows Phone 7 include Twitter, Netfilix, Slacker Radio, Amazon’s Kindle App and more.

Another key feature is the Business hub which features Microsoft Word, Excel, PowerPoint and OneNote. Users can use Microsoft’s office suite and save their files directly to a free Internet file service called SkyDrive. Once saved to Microsoft’s SkyDrive, files will be accessible anywhere Internet access is available.

In addition to its tiled user interface, Microsoft has included a voice command system. Users can press and hold the Windows button on their phone and begin to issue a command that begins with “call,” “find” or “open.” Everything from searching to the nearest pizza place to calling Aunt Edna can be done with voice commands.

Although Microsoft’s early attempts at smartphone software with Windows Mobile were clunky and inefficient, they’ve improved their efforts immensely. Windows Phone 7 is a competent alternative to Apple’s iPhone and Google’s Android devices. Those who find other smartphones’ interfaces too complicated, cluttered or intimidating will likely be pleased with Microsoft’s latest entry into the smartphone arena.

Unlike Apple, Microsoft has licensed its Windows Phone 7 software to Dell, HTC, LG and Samsung to make the actual phone hardware. The current models available are the Del Venue Pro, HTC HD7, HTC Surround, Samsung Focus and LG Quantum. AT&T and T-Mobile are the only two U.S. cellular carriers supporting Windows Phone 7 at launch. Sprint and Verizon are expected to carry Windows Phone 7 devices next year.

The HTC Surround, LG Quantum and Samsung Focus will be available from AT&T for $199.99 with a two year service agreement.

The HD7 and Dell Venue Pro will be available from T-Mobile for $199.99 with a two year service agreement.