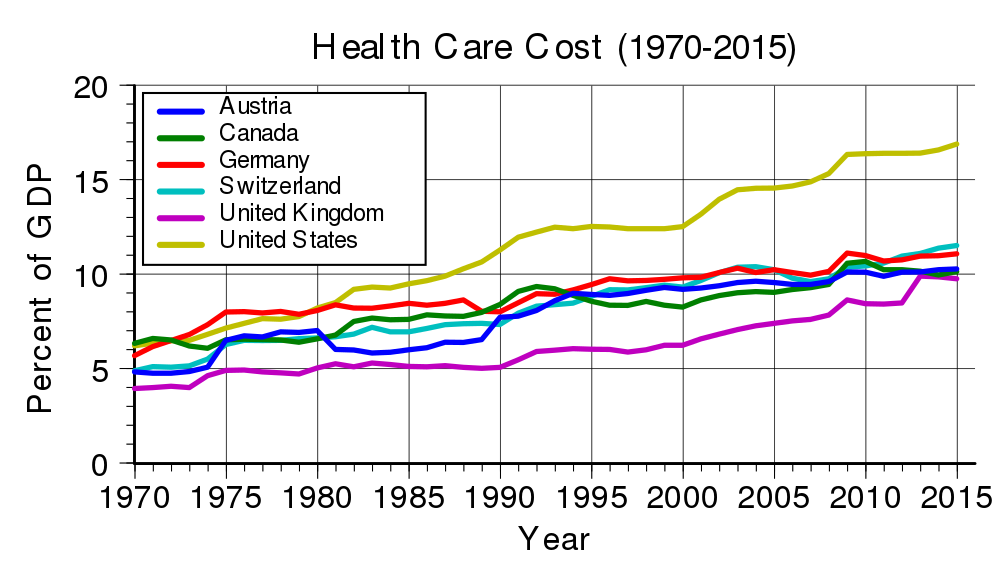 Behind the need for health insurance lies the need for affordable healthcare, and getting a college degree reaps less profits as the cost for that degree increases. Americans have the highest costs for healthcare and tuition in the world. For most people, life in the United States is and has been plagued by rising prices and stagnating income.

Health care costs are one of the most formidable obstacles for people, but the health care debate is rife with contention. A conservative outlook will point out that government programs like medicare or medicaid have done little to curb the actual cost of health care, and they may even argue that federal and state programs have nurtured the ever-increasing costs. Liberals are more critical of the health industry, that is, the corporations which make up both the healthcare and insurance sectors.

There are clear patterns of overcharging for low quality insurance products and overinvestment in expensive equipment and pharmaceutical drugs. Additionally, America’s population has become older and is only projected to become more so. This has added strenuous demand on these industry’s products, further inflating costs. The vast portion of profits made by the healthcare industry is spent on corporate stock buybacks, which increases the value of company stock but does not make the costs of their products any cheaper.

Health insurance and healthcare formed a symbiotic relationship for the efficient growth of their industries. Consequently, Americans, during the evolution of these industries, began to pay for a rising insurance price and a rising healthcare price as most incomes stagnated. The common person was simply given the task to make their day labor most efficient for their employers needs, while inefficiently paying for their own necessities. In 1970, annual healthcare cost $356 for each person–since then, the cost has grown to $7,538 annual per capita.

Following the United State’s trends, the global healthcare industry has grown faster than the overall global economy. The share of global GDP by healthcare has increased from 5.2 percent in 1970 to 10.1 percent in 2008. In 1980, the monetary value of output by healthcare was about 9 percent of the United States’ annual Gross Domestic Product (GDP), whereas in 2008 healthcare took about 16 percent of the share of total U.S. GDP. As certain industrial sectors claim more of the economy’s net worth, the whole economy bleeds wealth into those sectors. Practices like corporate stock buybacks further assures the concentration of wealth in the corporation and the industrial sector as a whole.

For about four decades now, prevailing forces have decimated people’s needs for price transparency, affordability, innovation and competitive entrepreneurship. Since 1986, tuition for the aggregate US schools has increased about 20 percent every five years according to the College Board. While healthcare partially blames an increasingly older population for rising costs, both public and private colleges have no such excuses. When, as according to the Delta Cost Project,  “tuitions at public four-year colleges and universities soared nearly 160 percent since 1990” people start to wonder what or who all this new money is spent on. According to an analysis by the Congressional Budget Office “the average tuition and required fees for full-time-equivalent (FTE) undergraduate students increased from $690 to $2,310 [adjusted for inflation]” between 1970 and 1986. In 2015, the average U.S. in-state tuition rate was about $9,800.

There is one crucial parallel between healthcare and tuition cost increase in America: the proportionally large influx of administrative positions has increased the cost of what these institutions sell.

“The disproportionate increase in the number of university staffers who neither teach nor conduct research has continued unabated in more recent years, and slowed only slightly since the start of the economic downturn, during which time colleges and universities have contended that a dearth of resources forced them to sharply raise tuition” recalls the Huffington Post. “There are now two non academic employees at public and two and a half at private universities and colleges for everyone full-time, tenure-track member of the faculty”.

Few perspectives see this as positive. One financial management analyst from Bain and Company wrote “In no other industry would overhead costs be allowed to grow at this rate—executives would lose their jobs”. Healthcare works no differently–from data by the Bureau of Labor Statistics it is clear that administrative positions in healthcare increased by over 3,000 percent since 1970. With the financialization of these industries, money was allocated to make more money without proportionally expanding or improving the service which healthcare and universities were supposed to provide. But America’s budgeting problem is not just high living costs from firms who invest their profits in ways to make future profits larger.

The strain of high costs has stagnating incomes to blame too. According to the Economic Policy Institute (EPI), U.S. middle income wages rose six percent since 1980, while low income wages decreased by five percent. Both of these figures are dwarfed by a 41 percent increase in income of the highest wage earners over the same period. Middle to low income folks income has stagnated relative to the total income paid out year after year.

The matter of fairness comes to a point while considering that since 1973, net U.S. labor productivity has increased 74.4 percent but hourly compensation rose only 9.2 percent. Most people have been working for free! But for whom? Since 1980, the top one percent of wage earners increased their income by 138 percent, the bottom 90 percent of wage earners saw their incomes increase by 15 percent. These days the world funnels wealth from most people to small groups of elite, and everyone suffers for it.