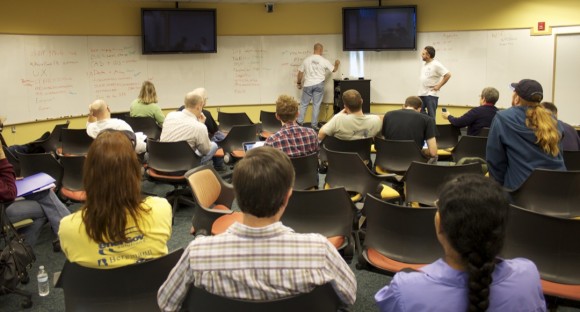 Anthony “Tony” Quartararo of Spatial Networks (left) and Eric Wolf of the USGS write down topics proposed by unconference attendees.

27°53’50” N, 82°42’41” W – or – Tampa Bay may not be considered a hotbed for technology startups, but on Feb. 10 and 11, it hosted WhereCampTB, an event focused solely on bringing together geographers, programmers and enthusiasts to talk about mapping and technology.

The event kicked off with a group of Ignite talks, five-minute presentations with 20 auto-advancing slides, each given 15 seconds in the limelight. The Ignite session was followed by an “unconference” Saturday morning. The unconference format, originated by technology publisher O’Reilly Media in 2004, uses decentralization as its central tenet. Rather than having a structured conference based on paper proposals, sessions and panels, the unconference format encourages spontaneity by having participants propose topics on a white board.

During both the Ignite talk and the unconference, a significant amount of attention was given to Open Street Map (OSM), an open source alternative to Google Maps. Internet denizens can create an account with Open Street Map and begin editing points of interest, just as they can edit articles on Wikipedia. Discussions and talks highlighted everything from bands of users making efforts to comprehensively map their cities to various problems that OSM is currently facing. One of the largest issues raised by attendees was troubled management, which has led to open source licensing issues, declining monetary support from Yahoo! and weak infrastructure. Likely the most commonly raised issue was the complaint that OSM is not visually appealing.

Washington, D.C.-based MapBox, was on hand to demonstrate its solution in creating visually appealing maps and data visualizations with its TileMill application. TileMill gives users the ability to control the look and feel of their maps with a (cascading style sheet) CSS-like markup language.

Open Data was also a popular topic at the unconference. While Open Data can have different meanings, to geographers it generally means having access to local, state and or federal government map data including everything from water management districts to census data.

While many topics were decidedly technical in nature, a cross-disciplinary theme was typically present. Whether it was mapping graffiti in cities to track grassroots sentiment or using spatial data for tourism boards and businesses, it was clear that visualization of data in map form was used in a wide array of disciplines.

“With programs like New College, the idea is to create cross discipline programs and geography is inherently cross discipline,” USGS Student Geographer Eric Wolf explained to the Catalyst. “Even though it seems like, ‘Oh, they’re just a bunch of computer geeks over there,’ everything we’re talking about is grounded in the same kind of big questions that students at New College want to explore. I’ve used the word ontology a lot in the last session. And in some ways I’m specifically talking about the computer science sense of ontology as like a data schema, but we’re talking about geography here. And it actually ties back to how people view and interact with the world–how they define reality, which gets closer to the philosophical sense of ontology.”

Wolf noted one other aspect that may appeal to students. “Unconferences are typically completely free and almost always there’s free food and free t-shirts,” Wolf added. “It’s a student’s dream.”

Organized by Clearwater-based company Spatial Networks, the event had a long list of sponsors. The roster included the United States Geospatial Intelligence Foundation, O’Reilly Media, Where Conference, Spatial Networks, MapBox, Collaborative Labs at St. Petersburg College, the United States Geographical Survey and the City of Tampa. One of Spatial Networks’ latest contributions to the mapping world is their Fulcrum app for iOS devices. The free application aids users in data collection by allowing them to create custom forms that can record anything from text, GPS coordinates and video and save it to the cloud.

Though WhereCampTB evidences that there is an interest in technology startups within Tampa Bay, President and CEO of Spatial Networks Anthony “Tony” Quartararo thinks that Tampa Bay is facing some obstacles. “It’s an interesting problem–it benefits from its geography but it also suffers from its geography,” Quartararo told the Catalyst. “In fact, some companies, as soon as they grow big enough, move out of Tampa intentionally. There’s not a lot of banks giving out loans for startups and the VC community here is almost nonexistent, so without that without access to capital, it’s hard to have an entrepreneurial startup high tech business community that really lasts. As soon as they get any measure of success, they exit and they take the jobs, the revenue and the taxes with them.”

When asked about Tampa Bay’s future in terms of its technology startup ecosystem and what can be done to make the area more conducive for their growth, Quartararo proffered a long term plan. “Well, it certainly has a huge potential, but there are things that need to be done for that to happen.” Quartararo said. “The educational institutions around the Tampa Bay area need to vastly improve their contribution in terms of churning out highly qualified candidates in the engineering and sciences field and they’re lacking in that.”

Why did Quartararo choose to base Spatial Networks in Tampa Bay? “Well, I didn’t really have a choice,” Quartararo told the Catalyst. “I was here, I left the job that I was working for and I started the company because I was working 80 hours a week and I didn’t really see a future for me at the company that I was working for, doing that in terms of where I wanted to be in my personal financial goals. So I stopped doing that. And I thought that if I was going to work that hard I might as well work for myself.”