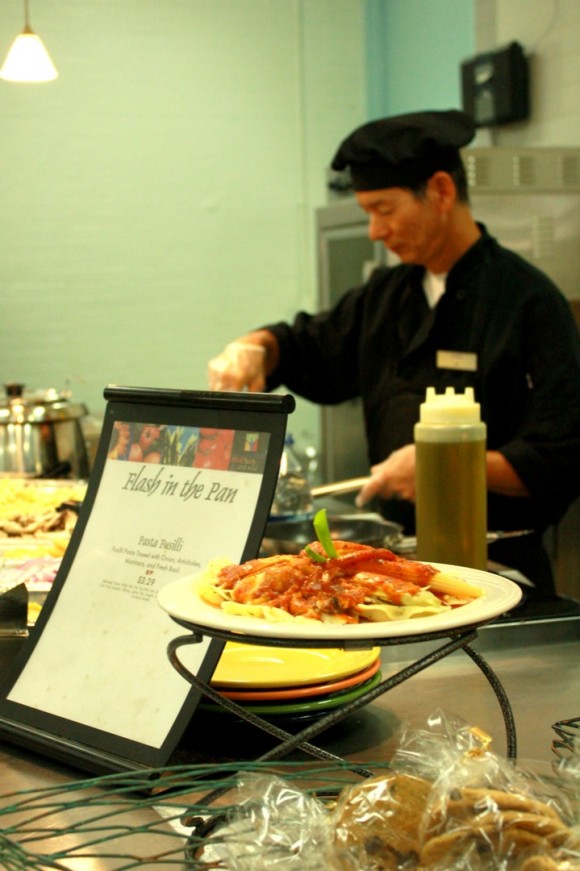 Serving quality food but paying for the convenience.

As students go about their day-to-day business at New College it is only a matter of time before their academic enthusiasm begins to flag and they are accosted by an uncomfortable grumble in their tummies. For some, the simple solution is a visit to Hamilton “Ham” Center, a good place to go for convenient food but sometimes, that only makes the grumble worse.

One of the things incoming first-year students have to face for perhaps the first time is having to take care of their own dietary needs. Although the Pei plan is the largest meal plan, not only can they still run short of cafeteria funds, but eating the same foods week after week is exhausting and not the most nutritional option. Beyond that, they have to investigate and determine other local viable options such as farmers’ markets, grocery stores, restaurants and other on-campus options, such as the Boar’s Head, that work for them.

The Pei Plan is by far the largest plan offered and according to the NCF website it allows for $9.80 spending a day after the initial seven percent sales tax and ten percent “Food service auxiliary charge calculated on buying.” But to precocious first-years who often have an appetite that exceeds their pocketbook, $9.80 is not enough to sustain them on three meals a day, especially when much of what Ham sells is double the price of what one would find in other local grocery stores. They pay for convenience as much as they do the food, and to the cost conscious student there are better options in terms of nutrition, price and sustainability.

“Even though the portions here are big, it won’t fill you up in any nutritional, sustainable way, I recommend transferring your bucks,” third year Alexander Wilson remarked, as he was asked how he survived his first few years. This sentiment was shared by 06’ alum Rita Yelverton who said that she also transferred all her money to the Four Winds last year.

“It is just a more filling and healthy option, especially if you are a vegetarian or vegan,” she said. Of course the downside to these options is that they cost more with a 2:1 transfer ratio.  What would be a dollar in Ham becomes two dollars at Four Winds, so 500 dollars at the Four Winds would be equivalent to 1,010—after the transfer charge, at Ham. So the price difference is steep, but to the student who prefers healthier options and doesn’t rely solely on Ham for food might find it a better choice.

Another option is always going off-campus for meals, local restaurant favorites include Big E’s which Wilson calls: “the epitome of cheap food. You can get a sandwich there for $3.50, and because it is so cheap you get an interesting group of regulars. I have had conversations about everything from chess to space invasions.”

For 24 hour cravings there is more expensively, but deliciously, an Applebee’s around the corner and a Taco Bell. “There is always the late night Taco Bell run,” Rita said, “I am a big fan of that.”

Then there is always the option of self-prepared food as well. “It is harder to cook here because most of the dorms don’t have cooking in the rooms,” he said, “but I highly recommend just trying things out and there are always people on campus who would love to help and give you ideas.” Wilson advised to the students who are not so fortunate enough to have their own kitchen, “You should spend a lot of time planning before hand, so that as soon as you get to the kitchen you can just cook.”

“Just buy a lot of food that you can cook all at once and then you don’t have to cook very often,” Rita also recommended. Some good options include stir fry, pasta and rice—things that one could buy cheap in bulk, make large quantities, variable and will always keep well in a fridge. Cook big and cook cheap, a motto suitable for any hungry college student.

There are abundant options in the area for grocery shopping—the closest to campus has been Winn-Dixie, but since it is facing imminent closure, the most convenient option is now Publix. For bulk, higher quality options and more specific options, Wilson recommended The Granary and Richard’s Whole Foods, which specialize in produce and alternative options to meat—“expensive but here you pay for quality,” Wilson added.

Publix is good for an easy fix, but for fresh produce there is always the Downtown Sarasota Farmers’ Market “The farmers’ market downtown is really cheap with really high quality produce, locally grown, and a lot of New College students working there,” Wilson said.

There are even more alternative options that several people on-campus partake in, dumpster diving and home grown food being two of them.  Some upperclassmen have learned how to subsist quite fine on small budgets and small meal plans and have wise advice to give first-years who find themselves with a huge appetite, a huge meal plan, no kitchens and little money.

Money management can be a tough mountain to climb at first, especially to the student who has never done it before. “For Ham money, ignore the side dishes because they aren’t going to fill you up,” said Wilson. “They will fill you up matter wise but will rarely do anything for you nutritionally. Keep your eye on the balance.”

“Making a shopping list before you go shopping will help you with money management,” Rita said, “and when that doesn’t work, there is always the freegan option.” Indeed, there is always the freegan option, where everybody from hungry first-years to destitute thesis students can always make a mad-dash for the food left on tables in Ham and frequent every opportunity food is offered, with good options, proper money management, and the freegan inside of everyone, no college kid should go hungry.