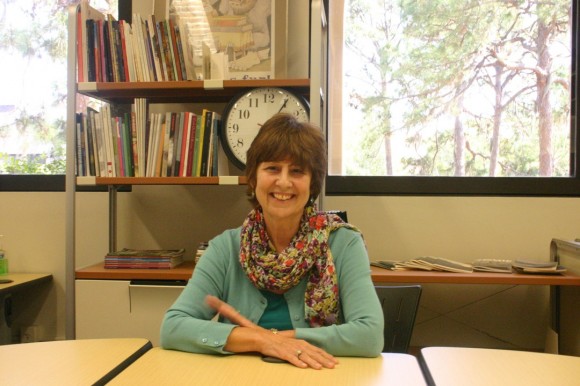 Jan Wheeler sits at the central location of the Writing Resource Center. Assistant Director Natalie Catasús says that while it’s bittersweet to see Wheeler go, she thinks Wheeler “would agree that a big change like this could be an opportunity for the Writing Center to grow in new directions.”

When asked what she will miss most about New College, Jan Wheeler replied without hesitation: “The students. They’ve kept me here.”

After over 30 years working at New College, Wheeler is leaving her position as the Director of the Writing Resource Center (WRC) to retire. After having thought about and thoroughly researched the concept of retirement, Wheeler came to the conclusion that she’d like to relax and “cultivate [her] garden.”

“Both literally and figuratively,” she added.

Wheeler plans on using her time in retirement to think and reflect. She also sees volunteering in her future, perhaps with the Literary Council of Sarasota. “There are so many ways to contribute to the world,” she said.

Wheeler also plans on staying in Sarasota. Not only does her husband have a business in the area, but they just built a house here in the city right down the road from one of her granddaughters. Wheeler is looking forward to the extra time retirement is going to give her for things like spending time with family and reading more. Wheeler also loves the idea of no longer having to wake up to an alarm clock.

“The only downside to retirement that I can see,” Wheeler said with a smile, “is that there is no excuse not to do the projects you’ve been planning.”

Wheeler stated she’s going to occasionally revisit the school to see both her friends and the students, especially since she’ll have more time in her schedule to go to the lectures and presentations that she’s been too busy for in the past. She’d also like to go and eat at the student-run Four Winds Café.

Wheeler was hired to work with small tutorials with groups ranging from first-years to thesis students. It was ten years ago that she was asked to open the WRC, an experience that Wheeler said “has been an adventure.”

Wheeler has very much enjoyed working with the Student Writing Assistants (SWA’s) over the years. “I’m pleased to say it has been a collaborative effort from the beginning,” Wheeler said.

Thesis student Martin Steele, who’s been working at the WRC since last fall, said “there’s this strong sense of camaraderie between all of us, and Jan does a lot to contribute to that atmosphere.”

While Wheeler is not sure who is going to take her place in the WRC when she’s gone, she does hope that the school will begin to offer more writing classes. One of the few changes she’s noticed in the school over the years is how the interest in creative writing is consistently increasing. As for other changes that happened within the school, Wheeler can’t recall many since she’s been here, aside from the increase in school size.

The WRC, however, is “a little different every year because of the different people working here,” Wheeler stated. Though there is one thing has never changed and that’s the one-on-one philosophy that the WRC lives by.

Wheeler guessed that her last day will be approximately one week after spring graduation, an event that is always a “self-reflective, tearful occasion,” she said.

Wheeler explained that whenever she felt low, she’d go to the thesis room in the library and it would immediately lift her spirits because how amazed she’d feel by the “topics and approaches to the school’s academic endeavor.”

“The students just knock me out,” Wheeler said.

The feeling is mutual. Assistant Director of the WRC, Natalie Catasús, has worked with Wheeler since 2009 and had nothing but good things to say. “Jan always made staff meetings fun,” Catasús recalled. “[She was] always smiling and cracking jokes while managing to keep us on track and make sure the important things were getting done.”

Steele said that Wheeler is “pretty much the heart and soul of the WRC” and Catasús agreed, stating that “Jan really made the Writing Center what it is today.”