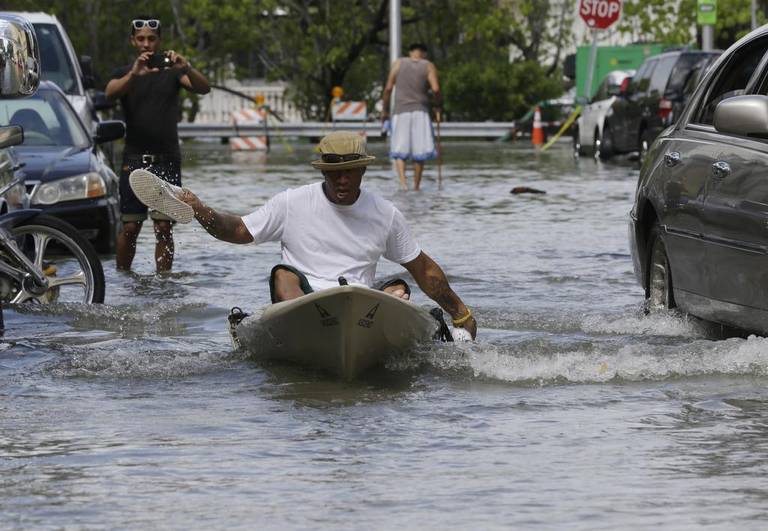 Florida is ground zero for climate change. As the flattest state in the country and one of the lowest in terms of elevation, it stands at a considerable risk to the effects of sea level rise. Six of the ten American urban centers most vulnerable to storm surge are in Florida, according to a 2016 report from CoreLogic, a real estate data firm. Many cities, including Key West, Key Largo, Fort Lauderdale and Miami have experienced more extreme tidal flooding and seasonal tidal flooding as sea water rises up from the drainage systems and floods streets and lawns. Although developers continue to build along the coast and beachfront, the real estate market in Florida could lose a considerable amount of money in property values as the seas rise.

According to a report by Risky Business Project, between $15 billion and $23 billion of existing property in Florida will likely be underwater by 2050. By 2100 it could be between $53 billion and $208 billion.

As a low-lying coastal city just four feet above sea level, Miami is one of the most vulnerable places to rising seas. According to a projection by the U.S. Army Corps of Engineers, by 2045 Miami-Dade County is expected to see about a 15-inch rise in sea level above current levels. This rise won’t just mean more intense tidal flooding. Sea level rise could also cause degradation of land in the Everglades and increased saltwater intrusion, saltwater contamination of the drinking water supply and flooding of power plant substations and ensuing power outages, according to a 2016 report on tidal flooding and sea-level rise in Miami-Dade County.

The peer-reviewed journal Nature released a study in April that seeks to pinpoint where climate change will drive people in the United States, as people will be forced to leave their cities when warming temperatures and sea level rise become more intense. The results provide, according to the author Matthew Hauer, “the first glimpse of how climate change will reshape future population distributions and establish a new foundation for modelling potential migration destinations from climate stressors in an era of global environmental change.”

The study found that more than 2.5 million Miami residents may someday be forced to leave the city – the highest number in any city in America. Florida could lose 2.5 million residents to other states by 2100 if seas rise by 1.8 meters. This loss would critically affect local economies in Florida. Hauer points out in his study that many of these residents may not actually be able to afford to leave. There is a growing consensus that climate change will and does affect minority and low-income communities disproportionately.

In Hauer’s report, he names Austin, Orlando and Atlanta as the top three landlocked cities that would take in the highest amount of climate refugees. Around 460,000 people, many from South Florida, are predicted to migrate to Orlando. In this future world of sea-level rise migration Hauer warns that the waves of migration will overwhelm landlocked cities that are not prepared for the surge in population.

Hauer’s study assumes that sea level will rise by 1.8 meters by 2100. In a new study that accounts for the melting of ice sheets on Antarctica, it was hypothesized that oceans could rise by close to two meters in total. This doubles many other estimates of sea level rise. The 2013 report from the United Nations (UN) Intergovernmental Panel on Climate Change projected that the high-end sea level rise would be just under a meter by the turn of the century.

According to the Sun-Sentinel, South Florida has been nationally recognized for its work on climate change. In 2010, following the first Southeast Florida Regional Climate Leadership Summit, Broward, Monroe, Palm Beach and Miami-Dade counties came together to form the Southeast Florida Regional Climate Compact, designed to work on climate change mitigation across county lines.

Murley focuses on resiliency planning to make cities more sustainable. During his talk at Sainer Pavilion he said that all departments of city and county government should be responsible for taking action in coordinating the solution of moving towards resilience. He described his resilience strategy as the “sweet spot” of balancing between the economy, ecology and equity.

On Saturday, hundreds of thousands of people descended on Washington D.C. to participate in the People’s Climate March. Sister marches happened across the country and world on Trump’s 100th day in office, including a march in Sarasota. The marchers hoped to send a message to President Trump that climate change is real and people want the administration to act on it.