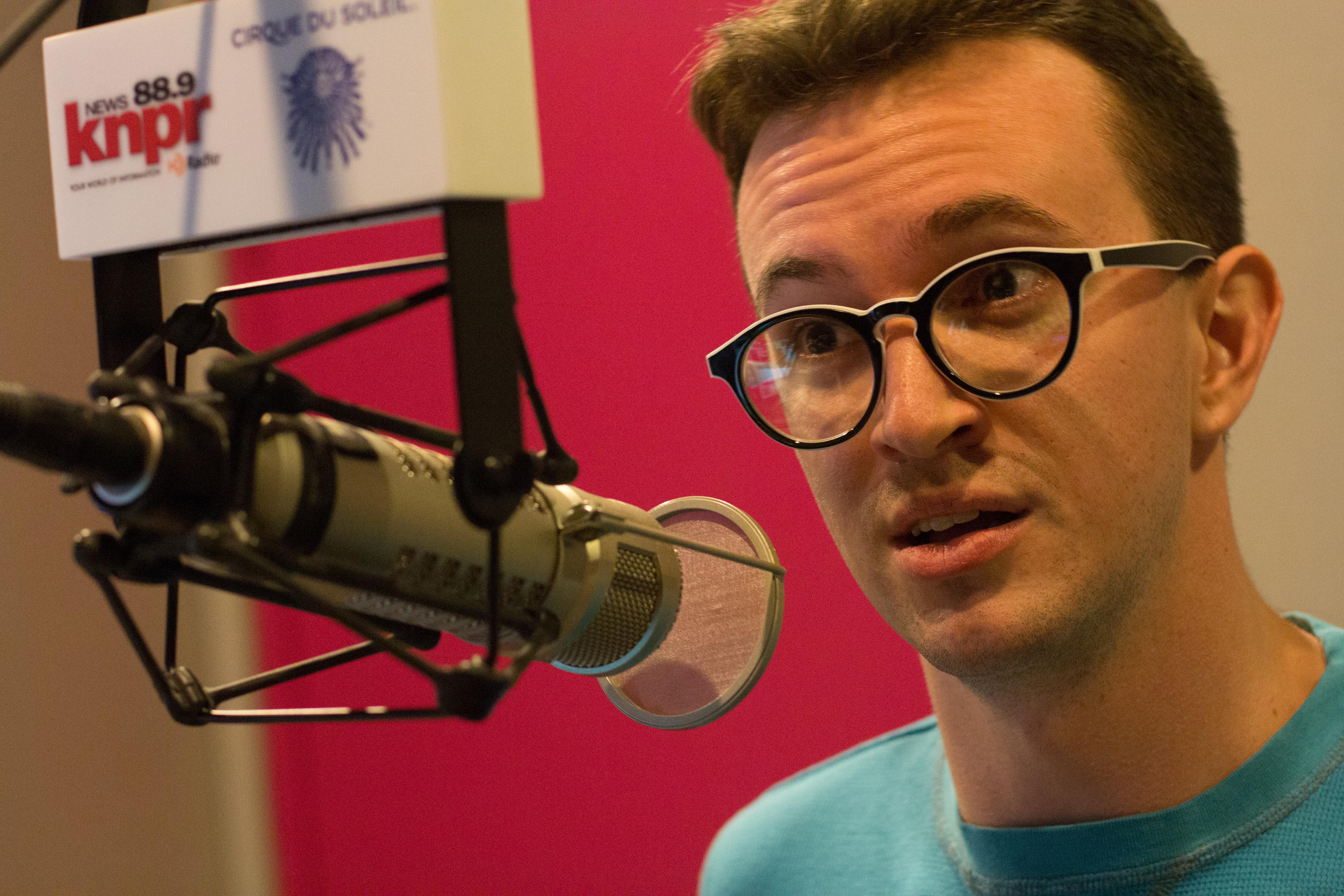 Alum Casey Morell (‘08) graduated from the New College of Florida in 2012 with an Area of Concentration (AOC) in Political Science/International and Area Studies. He served as the General Editor of the Catalyst during his thesis year before later attending the University of Missouri, where he obtained his M.A. in Journalism. Today, he is the coordinating producer of KNPR, a npr member radio station located in Las Vegas, Nevada. Morell spoke with current General Editor and thesis student, Giulia Heyward, in a phone interview about his experiences covering the Oct. 1 Las Vegas shooting at the Route 91 country music festival.

GH: Can you talk about what you do with NPR?

CM: My job is essentially making sure that the daily talk show that the Nevada Public Radio puts on, which is called State of Nevada, stays on the air. I help organize the show that we run, figuring out how long segments on the broadcast need to be, I work with different producers in our newsroom on booking guests, editing scripts, things like that. I handle all of the technical work for our show, so that’s directing, broadcast when it goes out and making post production work that needs to be done like editing for time or making it sound better. The easiest way to describe it is just making sure all the trains are running on time and are on the air everyday.

GH: Can you tell me where you were when the Las Vegas shooting occurred?

CM: I need to back up a little. My typical work week is Monday through Friday and I work from 7 a.m. to 3 p.m., so usually I am in bed between 10:30 and 9:00 p.m. every night. Sunday night I was in bed around 9:30, I think I fell asleep around 10:00 and I got a phone call around 11:00. As you probably know as a journalist, when you get phone calls in the middle of the night, it’s probably for a good reason. I looked at the phone and noticed […] that the phone number was from Ireland, so I thought ‘Okay, something is wrong.’ I was asked if I had heard anything about a shooting on the Las Vegas strip and I had said, ‘No, I haven’t. I’ve been asleep. [Writer’s Note: A piece by Morell titled ‘At Least 2 Dead Following Shooting on Las Vegas Strip’ can be found online. Another piece by Morell, titled ‘Deadliest U.S. Mass Shooting Happened at Las Vegas Concert’ was posted online, also by Morell, that same day.] […] I went to the newsroom and got there at 1 a.m. and was there until 8:45. It was almost a 22-hour work day.

GH: Who were some of the people who you got to talk to?

CM: The radio show that we do is a call-in show so, that Monday, we scrapped everything that we had planned for that show and basically opened up that phone line to ask people what they were thinking and what they were feeling. I’ll never forget that one of the people who called was a women of color, she identified herself on air as a women of color, and said that she was a Muslim. She said that she was grateful that the gunman was not a Muslim and was not a person of color because she was worried that, if he had been, then her kids would be targeted and she would be targeted, and she didn’t want them to have to go through with that. That was something that really stuck with me those first few hours after everything had happened.

GH: As a reporter and someone who was covering what was happening, what was that like for you from a behind the scenes perspective? You were both learning about what was happening as you were also then reporting about this to other people.

CM: It’s something else because when something like this is happening, your adrenaline just starts to take over. You are going full speed for hours and hours and hours on end and not really processing what exactly has happened in the city that you live in. […] It’s a strange thing when your city is under attack like that and you don’t get a chance until much, much later on, to try and comprehend what happened. Speaking honestly, I don’t know if I’ve been able to do that yet just because of a lot of hate [of the crime], the scale of what happened and the fact that we still don’t understand what the motive was.

CM: The immediate reaction was shock and sorrow. People were stunned that anything like this would happen here. Nobody expects something like this to happen where they live, must less in general. People were just taken aback and shocked by it all. And now, we’ve started to see that that feeling has turned into anger in some ways and as an anger of not comprehending what has happened or what was the motivation of what happened behind the act or just the sense of like, ‘Somebody would do this to my city?’–that kind of anger. What’s been interesting about it in some ways is how this city has mourned considering the fact that many of the victims were not from this city and had come to this festival.

GH: I actually read the work that was credited to you on the KNPR website about the Las Vegas shooting. One of the things that I thought was interesting was the piece you wrote on Oct. 5, 2017 on the financial aspects of the shooting. You talked about these lawsuits that were being filed, or financial compensation for these families that lost loved ones, and the fact that Stephen Paddock [the shooter] was such a wealthy person. How do you think this will pan out with his estate?

CM: Speaking first to the aspect of money for victims and families, there has been a private fundraiser that’s been set up on GoFundMe page for the victims, and the question is how that is going to be how that is distributed. […] When it comes to any kind of litigation that may come after the fact, that’s a good question. I don’t know how exactly that is going to pan out, or what a lawsuit against his estate would look like. […] Conceivably, a good enough lawyer would be able to find a case against those. One of the people who we talked to, who had a background in distributing funds raised for victims basically, said that anything that was raised to a fund like that for that should be distributed equitably should be distributed to all of the victims.

GH: Do you think that we’ll ever be able to find a motive?

CM: I hope so. I hope that we’ll have some idea as to why. I think that the community needs to come to some sort of answer, in that sense, or some sort of motivation because, to write it off and to say that the motivation was simply just a senseless act, I don’t think will satisfy people. Everything seems to have been premeditated to a frightening degree based on how long he was at the hotel, the measures he took to make sure that he wasn’t detected, the preplanning that he had done by getting hotel rooms, condos and airbnbs near other music festivals, there is some level of premeditation to this which means that there has to be some motive to this, at least what we would think. And I hope that, if we’re able to figure it out, it won’t make the situation any easier but at least we’ll have some semblance of understanding why.

GH: What do you think we have to learn from this tragedy?

CM: I honestly don’t know. You would think, just from a policy standpoint, that when it comes to guns and gun violence, that there have been so many lines in the sand drawn already, that there would have been so many events that have already taken place that would have spurred us into action. I honestly don’t know, I feel as if there has to be something to take away from this, there has to be something that we can learn so that these people did not die and hurt in vain. I don’t know if I have a good answer for that. […] One of the things that you learn as you go on to be a journalist, whether it’s on the job experience, in journalism school, or both, is how to deal with covering breaking news like this, how to keep your wits about you and report while everything around you seems to be going to hell in a handbasket. The one thing that they don’t teach you is how to deal with the aftermath, and how to take care of yourself when you can slow down for a minute and actually reflect on what’s happened. You don’t get that sort of training or education about making sure that you are okay after dealing with all of this and I feel like, as now someone who has had to experience that, that that kind of things need to be taught because it’s hard. It has been a hard week, not only dealing with the work aspect, but the mental anguish of knowing that something like this happened in your backyard. When I was starting to work on that Sunday night, I was only three and a half miles from the strip and I started hearing all of those sirens for those police and ambulances. […] This whole community has gone through a huge, traumatic event and I don’t know if anybody has really thought about the impact that that has had, in a lingering sense, on the people who live here.

More information about Casey Morell can be found on his website caseym.org.

Morell’s articles can be found on the KNPR website.

The GoFundMe for victims of the Las Vegas shooting can be found online.