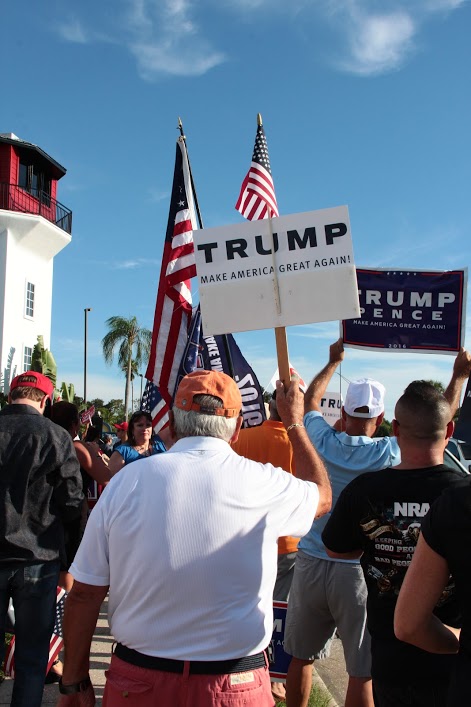 On Nov. 8, students were left reeling with the idea of a Trump presidency. When Nov. 9 hit, the campus was left with a new question: what now?

“The country has always had some elements that are not, what we might like, or what we might choose, but in various different challenging moments, there have always been people that were willing to step up and reshape history, and sometimes even make very good things about very bad things,” Professor of Political Science Keith Fitzgerald said. “I don’t think there’s anything wrong being in a sort of state of assessing and reassessing at this moment, where we are.”

Rather than remain silent, the community erupted with a range of reactions to the results of the election. During the election watch party, several students exchanged hugs and words of comfort, while some just sat quietly with their friends and took solace from the presence of others. While the student body was rattled, it was clear that New College was united and no one would have to be alone in the days to come.

“It gave me hope, because the community came together and we were all supporting each other,” second-year Ximena Pedroza said. “Multiple people came up to us, saying that they’re there, that if we need to talk, they’re here, that if we need resources or anything… They were just…‘How can we help each other?’”.

In the days after, New College stood together as the campus erupted with a display of reactions and students worked to find new and unique ways to comfort and support both themselves and the rest of the community.

“When these things happen, people have every right to react to them appropriately,” third-year and New College Student Alliance (NCSA) co-President Miles Iton said. “All I’m going to say is, I still ain’t surprised and I still won’t be scared.”

The most visible of the campus reactions were a wide variety of chalk messages scrawled across the Overpass and near the dorms by students such as second-year Jack Micoli, who wrote a message reading “fucking WHY” near Second Court. The messages ranged from expressions of shock to consolations and encouragement.

“It was the day after the election, so I spent the day cleaning and periodically crying.  The act of making huge angry chalk signs was really therapeutic,” Micoli said, although he later reflected that there were other things he could have written due to coming from a place of privilege.

“Yeah it absolutely does suck, the election results threaten people’s basic human rights, but your rights – able-bodied white cishet males, generally speaking, will remain intact as they typically have in this country,” he said. “The chalk signs did help me relieve some stress, but there are better ways for a privileged person to contribute.”

However, while chalk messages will eventually wash away, efforts to stand with the community did not. Thesis student and former NCSA co-President Paige Pellaton recently created the “New College United” poster campaign to spread messages of hope and encouragement across campus in cooperation with Sophia Doescher and Leen Al-Fatafta the NCSA.

“The NCF United campaign is basically, a passive programming campaign that I am getting involved with to remind New College students who might be in despair or not necessarily know where to go to that they have the rest of the New College Community as their support system,” Pellaton said. “It is a very passive campaign, it’s the one way that I know that I can help in a way that is not necessarily draining a ton of energy, but is also hopefully going to put back good faith in the community.”

The NCF United campaign currently has over 45 signatures and students can submit positive affirmations for the campaign via a Google Form that is accessible on the forum.

“Basically, I’m just looking for pieces of advice or words of encouragement you want to share with people in the New College community,” Pellaton said. “All responses are anonymous, and you’re more than welcome to submit or alter any responses you can.”

Off-campus, students like Pedroza and second-year Kayla Kisseado continue to actively protest the results of the election alongside many other Sarasota residents.

“Protesting is very, very empowering, there’s something about being united with a group of people who are from different backgrounds, hold different issues with this presidency, are being marginalized in different ways, even being with allies who are not being marginalized but don’t agree with this presidency because they understand how this is hurting, so, so many people,” Kisseado said. “And being united with them, just like chanting, marching, peacefully through the streets and such, having people look at you is very empowering, it makes you feel safe.”

In regards to how other students can get involved in protesting and other expressions of support, Pedroza noted the importance of being knowledgeable about what causes they support.

“Get educated about what you’re going to defend, because when you want to get involved, you will be asked questions, left and right out of everything, they will try to discredit you, and the slightest sense that they’re getting that you don’t know enough…they will shut you down, and if you know more and more, you will just prove them wrong, further and further,” Pedroza said. “Also be an active ally, if you see someone saying racist remarks to any marginalized community, or anyone in general, stand up, say something.”

Despite the path students choose or any opposition that they might face, asking questions and taking action will clearly be crucial going forward for those unsatisfied with the results of the election.

“You fight for justice because the fight itself is where you find your own sense of meaning, so as crushing as defeat can be,” Fitzgerald said. “It’s the dignity of the struggle that makes it worthwhile, that’s where we find our own dignity and our own humanity, it’s the fighting for justice that makes politics a worthwhile human endeavor.”