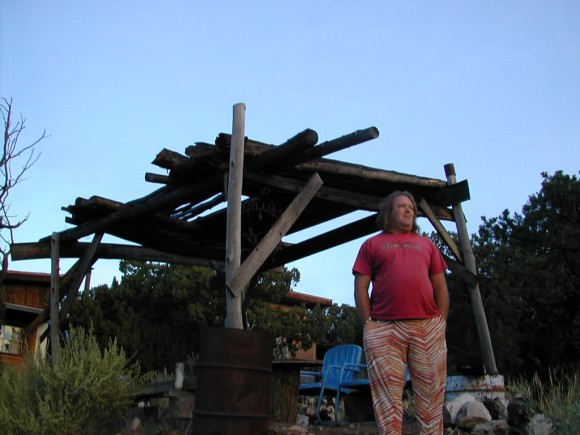 The regatta, held from Sept 3 to Sept 5, drew a large number of participants, observers, and some unhappy grumbling from racers. After the fourth and final race in Pedersen’s class had concluded, the captain of the last-finishing boat took issue with the results, arguing that officials had been unfair in assigning handicaps based on boat weight.

“To get this guy disqualified, we probably would have had to go into the protest room and argue for 45 minutes,” Pedersen says. “We would rather celebrate our victory, so we let him go.”

The winning crew also included Tom Turner and Doug Dearden, the owner of the champion boat, In Tune — “Like the Who song,” Pedersen explains.

“I trim the sails, and Tom is our tactician. He looks around and tries to decide where it’s windiest, because the wind is not uniform across the bay,” he says. “And Doug is very obsessive about his boat, and that’s one reason why it’s good to sail with him.”

“I’ve heard it said that the duty of a captain, at least on a race boat, is to make sure that everything on his boat works perfectly so that you have no excuse to lose.” Pedersen adds, “he obsesses over this boat even though it’s an ugly old boat.”

That obsession has paid off for the crew of the In Tune: the boat has captured the title of Sarasota Bay Boat of the Year two years running. The title is given annually to the winner of a racing series held by the Sarasota Bay Yachting Association. “And the way things are going,” Pedersen says, “it’s on track to be Sarasota bay boat of the year again this year.”

He says, “Suffice it to say, there’s an array of high priced boats out there, and In Tune is an old beater. It was bought eight years ago for $8,000. We lovingly call it the leopard boat because it has so many spots on its side, from running into other boats and things.”

He says with hint of a smirk, “Somebody with their $120,000 boat sees this monstrosity coming at them, they turn quicker.”

“It’s actually kind of ironic, because on top of the water the boat’s pretty ugly and scratched up, but underneath the water, she’s very smooth,” drawing out the last word of the sentence as he speaks. Dearden gave the underside of the boat a rubdown with 1800 grit sandpaper before the regatta, ensuring the crew could glide quickly across the water. “That’s about as fine as you can get,” Pedersen explains, “it’s really like notebook paper.”

Other pre-race preparations included clearing the craft of all but the most crucial boating equipment in order to lower the weight of the ship. From overhauling the boat’s heavy winch system to leaving the anchor behind, the crew of the In Tune makes sure that every pound on deck is worth its weight in speed. Pedersen explains, “When we go racing, the only stuff on the boat is stuff that wins races.”

So what did they bring along for the Labor day regatta?

“We had a cooler with beverages,” he says. “Well, you need to keep yourself hydrated. It wasn’t all beer.”

Pedersen is quick with a joke about almost everything, including his string of sailing victories. But he’s very serious about the role he takes on when heading out on the water as part of a crew. “You have to do everything correctly,” he says. “Every time you miss something, you’re giving the other boats a chance to beat you.”

Before he started competing in racing events, Pedersen says he had more of a “cruiser’s” attitude about boating. When he took up the hobby with his stepfather in the 1970s, he was floating around the lakes of Wisconsin aimlessly, not hauling tail on the high seas. “We’d go out sailing, and we didn’t care if boats went faster really, we were just going out to release tension,” he says. He fondly recalls days spent adrift in a Styrofoam and plastic vessel, even if such voyages did occasionally end with him paddling back home.

“It was like our meditation,” he says. “But as I’ve gotten into the racing — it’s fun, you know, a contest is fun. And to me being able to trim your sails better and catch the wind better and excel at this, it has a reward.”

Pedersen has been a familiar face on the bay front since enrolling as a Florida State University student in the 1980s. As Waterfront Manager, he manages the student employees in charge of facilitating activities at the sail club, located on the water behind the Caples fine arts center. He spends most of his time on campus working with students and other would-be seafarers, teaching the physics of sailing along with the nuts and bolts of running a craft safely on the water.

Almost at the slightest mention, he underscores his belief that all students should take advantage of the New College sailing facilities while they have the chance. But when it comes to the competitive world of boat racing, he caveats by saying it’s not for everyone.