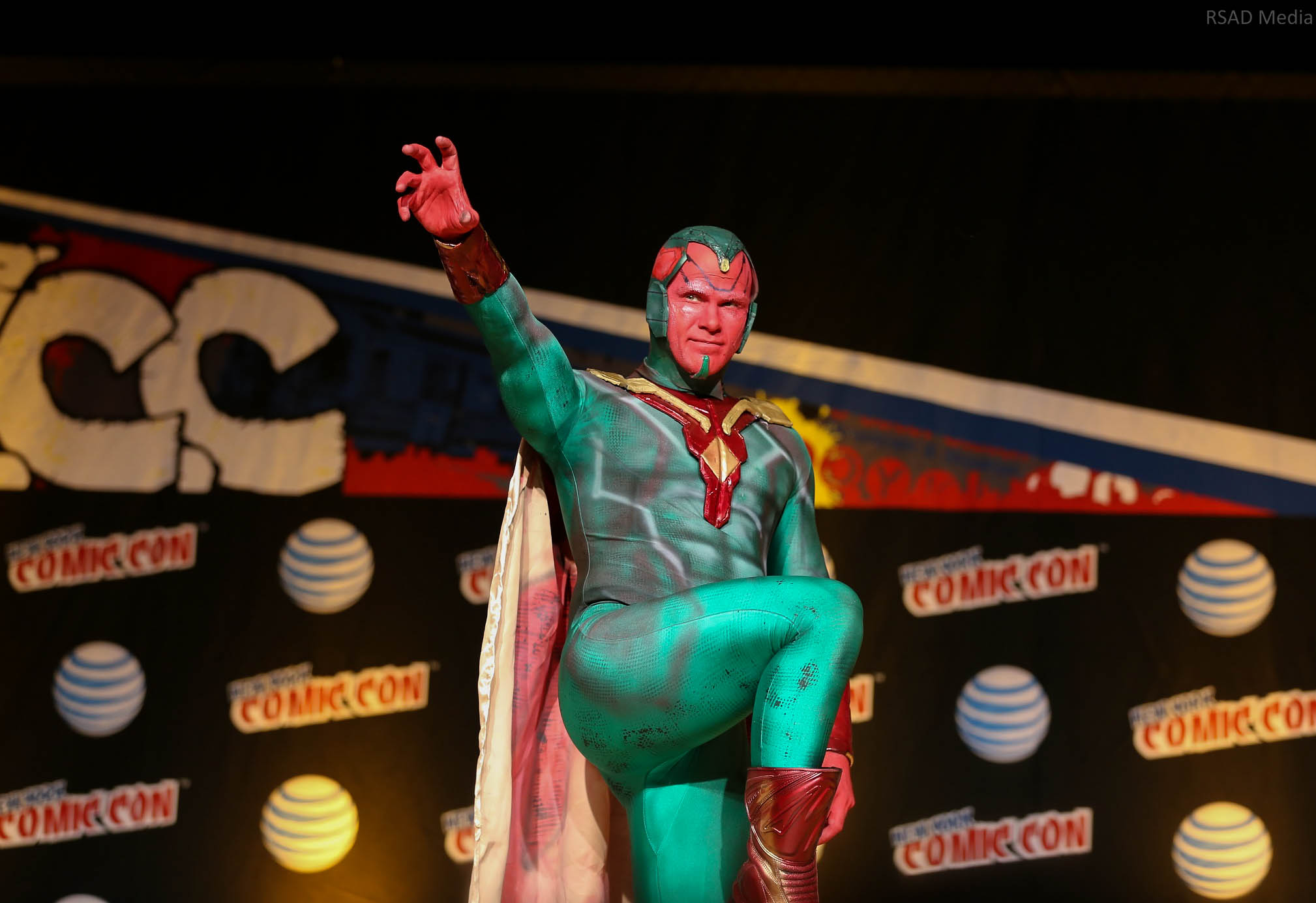 A cosplayer dressed as the Vision at the 2015 New York Comic Con.

Whenever there is mass societal unrest, there are usually superhero stories to follow.  For example, the cinematic world post-9/11 saw a renaissance of less campy superheroes and darker supervillains.  The recent Disney+ collaboration with Marvel Studios “WandaVision,” which ran from Jan. 15 to March 5, is an excellent example of this as Wanda struggles to process trauma in an artificial bubble-world that is eerily reminiscent of the real world in COVID isolation.

Professor of Political Science at Roger Williams University Annika Hagley wrote in a 2014 article published on The Conversation’s website, “Gone are the one-note villains of past texts, hell bent on destruction and death for the sake of it, theatrically costumed as if to suggest a slightly amusing side to their maniacal desires. And they are set against darker, deeper and more vulnerable superheroes whose weaknesses are exposed like the raw nerve that was America in the days following the 9/11 attacks.”

Post-9/11 America featured feelings of sudden instability and fear that harshly clashed with the preexisting feelings of American resilience as it was one of the biggest foreign attacks on American soil since the early twentieth century.  It was something that no one had ever had to confront before.

Similarly, this feeling of instability and stagnancy is prevalent in the COVID-19 pandemic as people are having to adjust their lives to adhere to strict regulations for the safety of themselves and others.

During the Spring 2020 semester when everything hit the fan, Professor of Religion Manuel Lopez spearheaded the tutorial “Understanding COVID-19: An Interdisciplinary Approach to the Pandemic” in which he, in collaboration with 20 other faculty members, attempted to look at the various effects of the pandemic.

“When the pandemic hit, I just felt that as an intellectual community and a human community, we needed to do something about it,” Lopez said.  “I thought that one way we could contribute to our community is to do what we do best, which is sort of explore and try to understand complex problems.  COVID is definitely the biggest problem we’ve had, not only in the United States, but in the world over the last few decades.”

The tutorial included different sessions with not only faculty members, but alumni and experts from the local Sarasota community as well.

“We were trying to process in real time what was happening,” Lopez said.

WandaVision takes place after the 2018 installment in the Avengers franchize, Infinity War, and centers around Wanda Maximoff, also known as “Scarlet Witch,” and Vision, played by ELizabeth Olsen and Paul Bettany respectively.  Both Age of Ultron and Infinity War ended rather devastatingly for Wanda as she lost her brother, Pietro Maximoff, also known as “Quicksilver,” as well as her significant other, Vision.  The show starts by showing the lives of Wanda and Vision in various sitcom settings, from a 50s Dick Van Dyke style to an early 2000s fourth-wall-breaking comedy a la Modern Family.  It is quickly revealed that these sitcoms are an artificial reality encompassing an entire town, every inhabitant of which is under the mind-control of Wanda.

Filming for WandaVision began in Atlanta, Georgia in Nov. 2019 but was postponed at the beginning of the pandemic in March 2020.  Production resumed in Sept. 2020 in Los Angeles, California.  All segments filmed in the second segment of filming featured social distancing or the use of computer-generated imagery (CGI) in scenes where that was not possible.  The show mostly addresses the prospect of working through trauma, but it is interesting to think about it in the light of an audience in isolation, much like the town.

“I think we were all a little cooped-up ourselves, with not being able to leave our houses,” Lopez said.  “For a lot of people, there were questions about why that bubble was created—was it the government, were there sinister intentions, forcing people into isolation.  I think ultimately the show was about trauma and how to process trauma, but there are definitely those layers of living in physical and emotional isolation.”

With the notion of “death of the author,” or analysis outside of the initial intended context by the author, WandaVision can be an incredibly powerful look into living under COVID-19.  The show was not initially intended to reflect society during a pandemic, but the added layer improves on the impact of the show.

“One great example of this is The Handmaid’s Tale,” Lopez said.

The 2017 Hulu show is an adaptation of the 1985 dystopian novel by Margaret Atwood, which raises a lot of what-if’s in relation to women’s rights and bodily autonomy under a totalitarian theonomy.

“When they finished filming the first season, it was the end of the Obama administration, and the expectation was that the show was going to come out in the Clinton era,” Lopez said.  “It came out during President Trump’s term, though, and suddenly people were reading the show through that lens even though that lens was not there to begin with.”

This time around, political shifts were not the main issue, but rather a wide-spread public health crisis.  A lot of people at the beginning of the pandemic turned inward, having suddenly a lot of free time on their hands.  Time in quarantine had the potential to be a very introspective experience, one which is reflected in WandaVision.  Wanda actively is harming many people, but she either does not realize it or she does not care because she refuses to look inward at herself.  These problems are amplified in her little bubble-world to the point where she no longer has control of the world anymore and has to let it go.

“I think one of the most beautiful things about these Marvel shows—and you can see it in The Falcon and the Winter Soldier which focuses on American nationalism and national identity—is that they’re pretty good at putting forward telling human problems and portraying them through the lens of a superhero story,” Lopez said.  “The most powerful and positive aspect of the show was the acknowledgement of the importance of dealing with trauma.  There is no escaping it.  I think that’s a good lesson for our COVID-19 experience.   You can pretend that nothing happened and basically do what Wanda did, which was create this alternative reality, but at some point you’re going to have to face the fact that there has been a very important loss.  It’s very important that we look back on not only how we suffered, but how we got there.”

WandaVision is available for free with a Disney+ subscription.