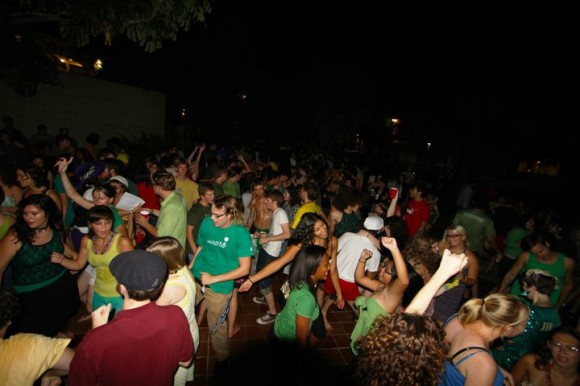 Students enjoy themselves at the Kiss-Your-Crush Wall in the Nook.

The tension was tangible on Saturday, Sept. 25 as students nervously shuffled around at an hour much earlier than normal, hastily cleaning rooms and constantly checking the clock while waiting apprehensively for the approaching gale force that would be their parents. For many, this was the first time seeing their parents since arriving on campus to greet the new school year. Their conditions since arrival have changed dramatically, many now sport erratic walking patterns from summer loafing, a general disheveled look, bloodshot eyes and the musky odor signs of a stressed Novocollegian — especially those recently-made neurotic first years.

Then the parents came in droves and packs. They were knocking on doors with goodies and bright smiles as the students were reminded that they could relax in the arms and eyes of the people who remind them of a past not too far gone.

So the day continued. There was a selection of conferences for the parents to learn the workings of New College scheduled throughout the weekend.  They would examine the recently cleaned rooms and perhaps dare to sample their son or daughter’s meal plan. They would wander the campus to observe the beautiful bay and to catch up with the child that they have missed so dearly.

But what do parents think of New College? They observe the facilities and faculty, the students and the activities and the question becomes not only what their child sees in their school, but what they do as well. It can be a risk going to New College, what with its alternative style of learning — which can be a frightening prospect to the parent who wishes their child to graduate with a decent job outlook. In a way, the parents have to be much like the New College students, ready to challenge learning and take risks where the rewards are great. As the Catalyst interviewed various parents, it appeared readily apparent that they had a love for the school not dissimilar to that of their students.

“I want to sign up, can I?” Gary Schiff, first-year Melayna Schiff’s father said immediately, “where do I sign on?” He then expressed his intent to attend a New College Wall because he and his wife, Brenda, knew “the parties exist but haven’t seen them yet.” Together they explained the value they saw in this school. “I like the feel of this place, it is a great setting,” Gary Schiff said as he gazed at the rapidly setting sun. “It is a good feel. For something we never heard of before, suddenly being able to find this is very cool.”

“I think it feels very intimate and I also like that feel,” Brenda agreed. “All I really know is that Melayna seems very happy and is enjoying the intellectual stimulation. What more can a mother ask for?”

Indeed, the intimacy of the campus is what many parents commented on when interviewed — especially parents who went to state schools much bigger and far more foreign than little New College.

The Countess’ had similar things to say while currently having two students, second-year Elliot Countess and thesis student Julian Countess, enrolled at New College. “From the parent’s perspective it is always nice to see a school so affordable offering what seems to be a great education,” mother Vicky Countess said. “It convinced me enough to do it twice.” When hearing that, her husband agreed and their two barefoot, Frisbee-playing boys smiled.

There were a few who approached the question with some discomfort, “All I know is what my daughter tells me,” said one mother who chose to remain anonymous. “And that isn’t much.”

But for the most part, the question of “what do you think and love about New College?” was very warmly received.  When first-year Lauren Brown’s parents were questioned her father, Shawn, immediately said “bare feet” as his daughter chuckled dryly at him.

Then there are always the veteran parents like the Countess’ who know intimately the workings of New College. From the academics to the Walls, they are pros themselves.

“I love how free and open it is, there is no limits,” thesis student Kotu Bajaj’s mother, Patti Rhodes, said.  “There is always growing happening here, you feel like you can blossom. Last night I went to the Wall and I said to myself, ‘none of the girls are wearing makeup.’ All the girls were so natural. Everyone dresses different. It is just so unique.”

First-year parents were particularly appreciative of New College having the sudden change of a child moving out fresh on their mind along with the way they were welcomed. “I love it,” Dawn Lancaster said of her son, Dylan’s, choice of school. “Everybody is so helpful. When we moved in, everybody jumped right in to help us new people who had no idea what is going on, where we were going, what we were doing.”

“When we first came down here to visit I knew that this is where my son needed to be,” said Thor Hlavaty’s mother, Renee. “That this is where he could grow, and where I can’t wait to watch him do it.”