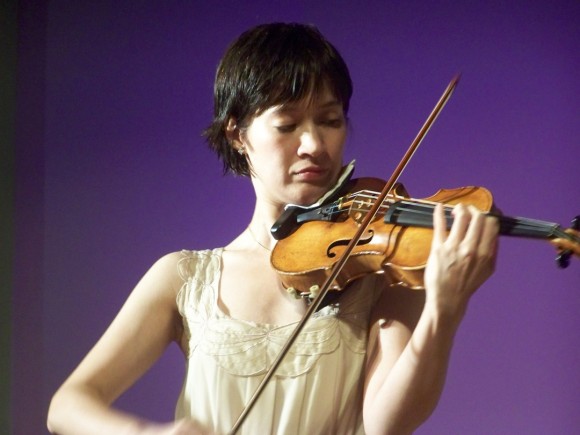 Miranda Cuckson warms up before her Sept. 24 performance at Sainer Pavilion.

During a festival in Mongolia, violinist Miranda Cuckson recalls playing a concert on the slopes of sand dunes in the desert. Her audience was one to remember. “Nomads came riding up on their horses,” Cuckson said. “People live there, separated by miles and miles, but somehow they got word around. It was magical, an amazing meeting of cultures.”

This is just one of many incredible venues in which Cuckson has played, alongside others located in Southeast Asia and much of Europe. After being asked which venue has been her favorite, she initially had a difficult time narrowing her choices down to one specific location. “I’ve played in some really beautiful places,” Cuckson said. “But the thing about playing in Europe is that a lot of the music came from there. You’re right there in that environment and it’s so emotionally resonating.”

Cuckson, who has been playing since she was five and is now in her mid-thirties, is the first musician in the 2011-2012 season of New Music New College (NMNC.) This series, directed by Professor of Music Stephen Miles, “offers an array of unconventional music programs that are, in range and quality, unrivaled in Florida,” according to newmusicnewcollege.org.

Cuckson grew up in a musical environment, with both parents being pianists and her father being a composer as well. At a young age, Cuckson had a fairly good idea that playing violin was the career path she wanted to go down. “By the time I was a teenager, I was really dedicated to [playing],” Cuckson said. “I started to perform at that time.”

However, her interests as a child were not strictly in the realm of music.

“When I was a kid I was very into writing short stories,” Cuckon said. “I was always drawn to creative sorts of things.”

Since music has obviously now taken the forefront, does Cuckson miss writing and the more language-oriented outlet it provides? “I love music for what it is,” she answered. “One of the amazing things about it is that it says so much [on its own.]”

“It’s about finding a way to express something that is so non-verbal,” she added.

Cuckson does get many opportunities to not only play the music and let it speak for itself, but also to talk about it during programs such as the Artist Conversation held in the Sainer Pavilion on Friday, Sept. 23.

“The interest in concert experience is evolving,” Cuckson said, explaining why talking about the music is so important. “Also, [people are interested] in the explanation of what the composer’s intent was.”

Cuckson began studying at Juilliard when she was just nine years old. She then went on to get her Bachelor’s, Master’s, and Doctorate degrees all from the same institution. She now plays one to two recitals a month, often combining solos with small chamber performances. She doesn’t necessarily prefer one over the other, though she does feel there’s something especially gripping when playing solo.

While Cuckson also mentioned that “more people have been writing really strong solo pieces,” she herself has had ideas for composing, but not enough time to carry them out. “Maybe one day,” she said.

After having played music for most of her life, one may wonder whether Cuckson still gets nervous before a performance. She said it depends on certain aspects, like whether the pieces she’s playing are new or really challenging. Though for the most part, “I’m pretty accustomed to it,” Cuckson said. “It just feels like I’m going to work today, in a positive way. This is just what I do.”

In her resident state of New York, Cuckson teaches violin at Mannes College the New School for Music and has anywhere from six to twelve students at a time. Her advice for aspiring musicians?

“You should always be enjoying it,” Cuckson said. “The worst thing is to develop tension. Remind yourself how much you want to do it and that it’s a fun thing to do.”

Cuckson also said that the discipline and process of learning music is something a student can apply to other areas of his or her life. Another benefit is the satisfaction one can feel as a result of advancement. “The great thing about learning an instrument is that it can be a good challenge to have for yourself,” she said. “It’s really satisfying to put in that practice every day and see yourself make progress.”

Cuckson gave a powerful performance to a full house in Sainer Pavilion on Saturday, Sept. 24, at the end of which she received a standing ovation from a very impressed crowd. The event was free to the students, faculty, and staff of New College.