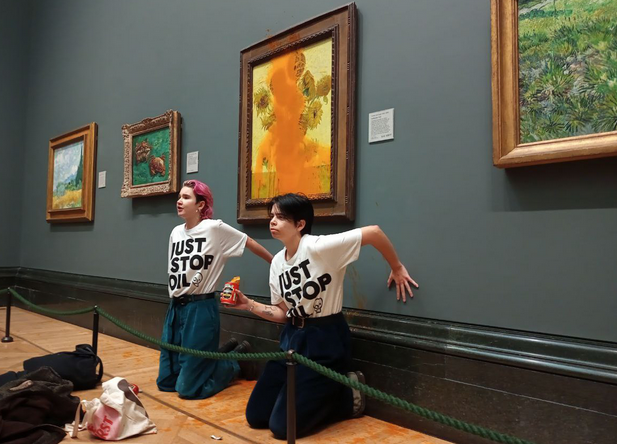 Plummer and Holland kneeling with their hands glued to the wall beneath the Sunflowers painting they had vandalized just moments before. Photo courtesy of Anadolu Agency.

On Oct. 14, two members of the climate activist group Just Stop Oil entered the National Gallery in London and proceeded to empty two cans of Heinz Tomato soup onto the glass frame of Vincent Van Gogh’s 1888 Sunflowers painting. The pair followed their actions by gluing their hands to the wall beneath the painting. They were later identified as 21 year-old Phoebe Plummer and 20 year-old Anna Holland.

It is important to note that none of the paintings in the following events were damaged in any way. Every vandalized painting was covered in a protective glass layer, allowing the various protesting methods to be easily reversible.

A civil resistance event has occurred every day since the announcement was made on the Just Stop Oil website. These events originally started as simply blocking roads throughout London, disrupting traffic and gaining attention for their cause. However, Oct. 14 seemed to be the exception. Not only was van Gogh’s Sunflowers painting vandalized, but Just Stop Oil protestors also spray painted a sign at New Scotland Yard. The group continued to vandalize buildings and block roads until Day 24 of their civil resistance declaration where supporters covered a wax model of King Charles III with chocolate cake.

Just Stop Oil was founded on Feb. 14 of this year and receives most of its funds from the Climate Emergency Fund. This organization is based in Los Angeles and received a foundational grant from Getty Oil heiress Aileen Getty. Filmmaker Adam McKay recently made a large contribution to the organization as well before joining its Board of Directors.

It seems that Just Stop Oil isn’t the only activist group taking a stand against the rise of fossil fuels and oil. On Oct. 24, a pair of German protesters, associated with the Letzte Generation, threw mashed potatoes at Claude Monet 1890 painting Grainstock at the Barberini Museum in Potsdam. Three days later, on Oct. 27, a climate activist glued his head to Johannes Vermeer’s Girl with a Pearl Earring painting in The Hague located in the Netherlands.

The public responses to these acts of protest have been conflicting. Some people, despite the lack of damage to the paintings, believe that these events were unnecessary. American magazine, The Atlantic, claims that the “art vandals” are an embarrassment. Other news sources, such as MSNBC, praise this group of young climate activists and provide an insight as to why these acts of rebellion are so powerful.

“What should we protect, the conditions that allow humanity to make art, to be creative— r the masterpieces that will have no one to gaze on them,” Just Stop Oil’s blog states in response to why the group “attacked” such a valuable painting.

The answer is simple: attention. After months of protesting, the group was gaining very little acknowledgement from the United Kingdom. Therefore, the group protested using a more extreme method. This event has taken the world by storm and is finally giving them the attention they sought out. The video of Plummer and Holland went viral, being spread across almost every social media platform. Reactions to the video are being uploaded to YouTube, newspapers are writing articles about it and of course, people are talking about it.

Just Stop Oil announced a brief pause of their civil rebellion against Westminster on Nov. 1. The group’s reason for this break is to allow the UK to respond to the civil rebellions the group has enacted. Just Stop Oil’s temporary break will conclude at the end of  Nov. 4 if the government does not respond to their demands. As of Nov. 5, the activist group has continued their acts of rebellion against the U.K.