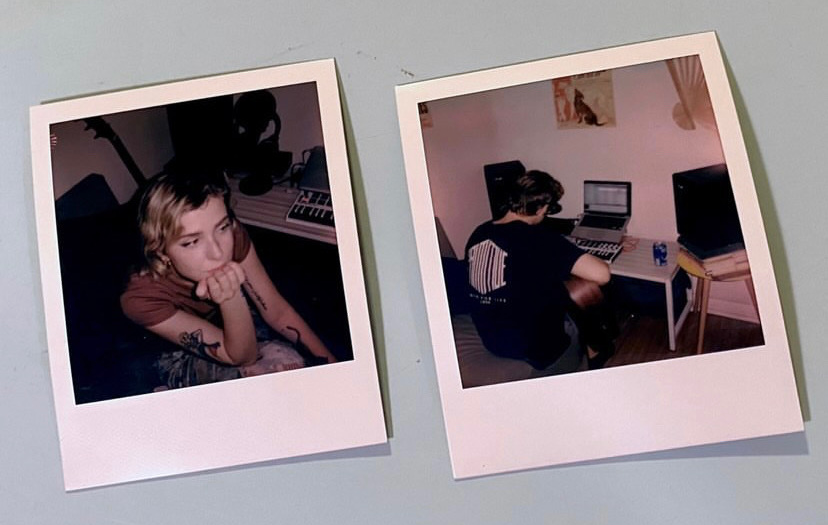 Discovering new music right now can be difficult in a sea of musical possibilities that all blend together. But in this vast ocean, Video Girl stands out. The three piece band is made up of vocalist/producer/audio engineer Bryan Pascarella, vocalist/lyricist Emily Gaul and producer/audio engineer Zaki Elhajoui—all of whom grew up in Sarasota. The band is making refreshingly catchy music that combines acoustic and electronic sounds and despite having just released their first material in December 2020, it seems they may have their spot in the limelight sooner rather than later. Albeit, every group has to get their start somewhere.

“We’ve all been friends since we were in about middle school,” Pascarella said. “We all went to the same church together and Zaki and I played on the worship team. I played piano, he played guitar and that’s kinda where we started playing music together.”

It took some time before the band was able to truly form. Gaul moved to Colorado before either of the other members left Florida. Pascarella and Elhajoui spent some of this time making music together under the name SWIIM.

“Zaki and I realized we had musical chemistry together when we were just kids,” Pascarella mentioned. “So, we ended up making this project SWIIM to start getting our music out there, a couple of years before Video Girl.”

In 2020, Pascarella graduated from USF and decided that it was time to leave Florida, but he kept making music with Elhajoui with the help of online tools.

“I initially moved out to Portland, because I had a friend there,” Pascarella recalled. “I was just trying to see where I wanted to go at the time. Zaki and I were still able to work together through Zoom and Google Drive.”

Pascarella lived in Portland for some time, but decided he was still unsure that he wanted to make it his home.

“I was staying in Portland and I ended up talking to Emily again after not talking for a while,” Pascarella stated. “It was awesome. I was able to come out to Denver and see her and I’ve been here for over a year now.”

While living together, Pascarella and Gaul would make music together, mostly for fun.

“Emily and I were kinda just messing around,” Pascarella admitted. “It wasn’t anything serious. Emily was into music, but she never really showed an interest in making it serious or anything like that.”

Recording covers then turned into recording Gaul’s vocals over original beats that Elhajoui and Pascarella made. With Gaul and Pascarella together in Denver, they’d record from home and produce demos. Elhajoui, based in Sarasota, sent the pair in Colorado music to work with and also received demos to mix and master to turn into a finished song. This continued for months, until the group had amassed around 30 to 50 songs’ worth of original material. Looking at how much music they had recorded together made them wonder if they had something bigger on their hands.

“Emily was really the one that was pushing it at that point,” Pascarella remarked. “We really thought we had something, so she sent it to her sister and friends and people said they really enjoyed it.”

From that point on, Video Girl was formed. Pascarella looked through the group’s catalogue and found the three songs that would eventually end up on their debut EP.

“We had these three songs, which just felt like they stood out and fit together a little bit more than the others,” Pascarella noted. “So, I mixed and mastered them—which was a challenge for myself—but we finished them and got them out and it’s been amazing.”

The recently released EP, titled Girl, is short but sweet. Despite a runtime of just nine minutes, every song delivers a satisfying and unique experience. By its end, it leaves the listener looking forward to more from the new group. Since the drop in December, Video Girl has been working hard on making sure their music gets put out there. That hard work has not been in vain. Their songs will be played on a local NPR radio station, Indie 102.3.

“Emily really was the inspiration for this side of things,” Pascarella said. “I’d been making music for years, but I didn’t realize how important the marketing aspect of this was. She sent the EP to a lot of blogs, radio stations and random people. We heard back from NPR and were told that our songs would be played on the radio at least once a day every day for the month of April, as well as getting the chance for a Zoom interview.”

In creative fields like music, it can be difficult to receive extrinsic benefits as a result of hard work. Thankfully, this is not the case for Video Girl. Their music and their journey is the product of a passion and willingness to succeed that is inspirational. Their EP can be found on all major streaming services.