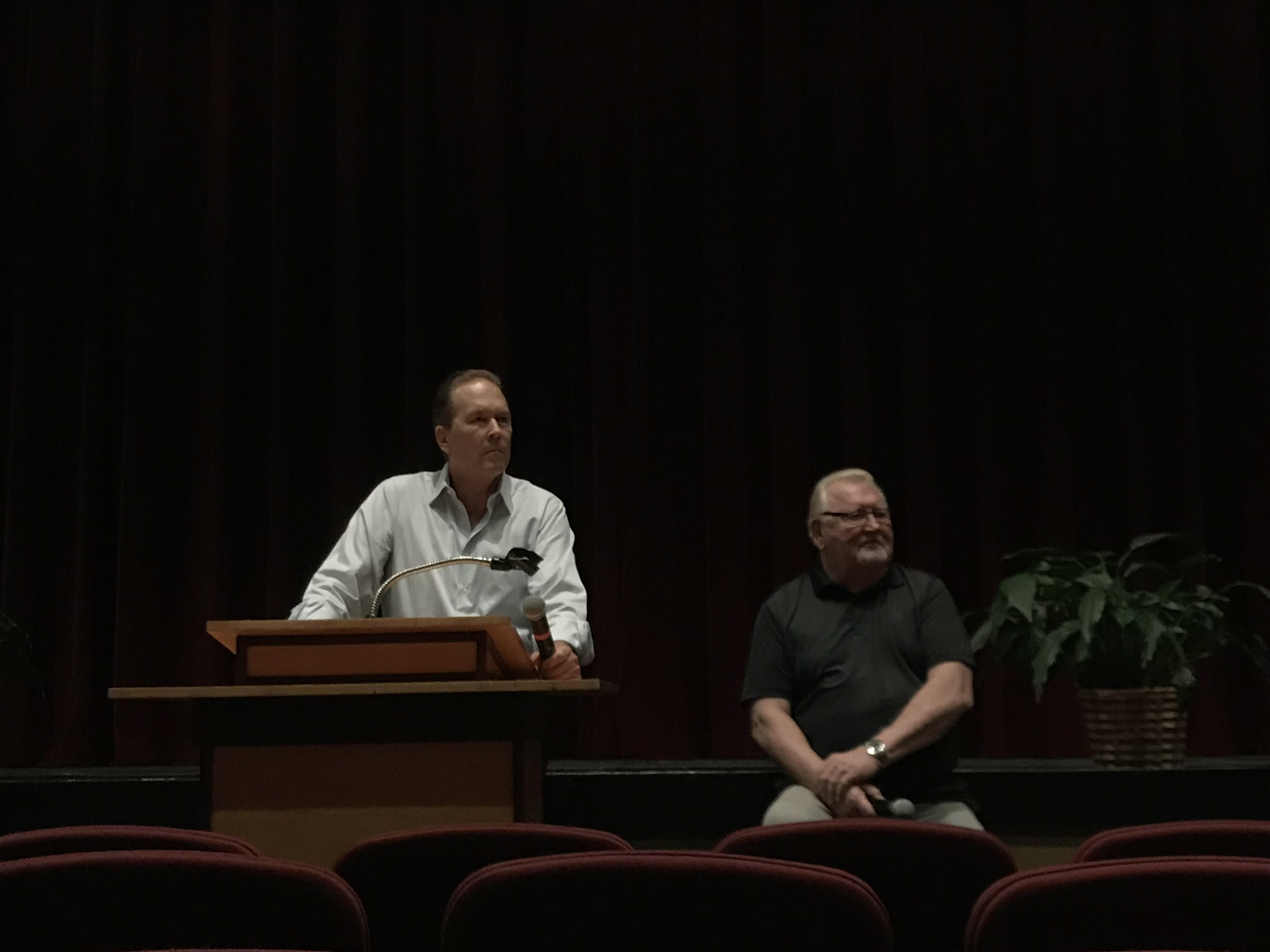 People lined up at the doors of the Manatee Performing Arts Center for an hour and a half before they opened. There was an excited buzz in the air, as it was one of the rare town hall meetings that Vern Buchanan, U.S. Congressional Representative for Florida’s 16th District has recently held.

“I’m sure there will be some people here that are going to be angry at his absence, and his total reluctance to have public town halls,” Wesley Beggs (‘10), President of Florida Young Democrats, said. “There are a lot of folks in the community who feel he is really hard to get ahold of; he feels very unaccessible to our concerns.”

After graduating from New College with a degree in Political Science, Beggs ran for Sarasota County Commissioner in 2018.

After around 150 people filled the Performing Arts Center, Buchanan and Wayne Poston, Mayor of Bradenton, took the stand. Buchanan first addressed veterans and Hurricane Dorian before introducing Poston. Poston asked the crowd to take a solemn oath of civility and to refrain from shouting out questions. Buchanan expressed his role as a bipartisan politician, working to incorporate both Republican and Democratic policies for the common-good of America. Buchanan has served on the congressional district since 2007, representing the Republican Party.

“I think he does a good job of playing the bi-partisan politician, but the reality of it is that he votes overwhelmingly in favor of Trump policies,” said Beggs.

Just days before Congress was to return into session, Buchanan announced this town hall meeting to the public. On his agenda was to find out what the public wanted him to bring up to Washington. Florida’s 16th Congressional Representative answered questions of both local and international importance, including debt and spending, the border in Mexico, military, medicare and social security, Russia and cyber security and even impeachment. Among the topics, the border, climate change and gun reform were hard hitters.

“We are working hard to get sensible gun laws passed in this country,” Pat Simmons of Moms Demand Action said. “I’m tired of Parklands, I’m tired of Sandyhooks, I’m tired of El Paso’s. I was just in Orlando with a group of us. The bus stopped and I looked, and we were outside of the Pulse Night Club. All of this has got to stop. Enough is enough. We need to ban assault weapons. There are veterans here, they know that those automatic weapons have no place on the streets. So please, do something. Do your job.”

In regards to questions about red tide, “Let me just say, a good environment is good for business,” Buchanan said. “Without quality water, you’ve got nothing. If you see pictures of [Lake Okeechobee], it’s like guacamole, it’s on CNN. It’s a disaster not just for them but for the whole state.”

The Manatee Democrat Party came prepared. Liv Coleman, Former State House Candidate, wrote the Manatee Democrat Party’s Town Hall Question packet, which was passed out by members of the organization. Question groups included: “Vern Buchanan and the Right-Wing Fringe,” “Tying Vern Buchanan to Trump” and “Election Security and Mueller Report.” There were multiple questions presented to Buchanan that came from this packet.

Second-year Ellie Young, President of New College Democrats, lived with Liv Coleman last summer. Her other roommates were the Vice Chair of the Manatee County Democratic Party and another woman heavily involved in the Obama Campaign. They encouraged her to get involved in local politics.

Young was involved with political organizing over the summer, which included weekly protests with Indivisible Bradenton, a group that goes against Trump’s policies and stands for all people. She was working on putting together a voter’s registration drive on campus, attending local talks about politics and involving herself with local political organizations. She rebooted the New College Democrats club this Fall, as it had fizzled out the previous semester.

There were many local businesses and organizations representing Manatee and Sarasota County in the audience and they thanked Buchanan for the time he has spent with them to work on their mission. These include Prodigal Daughters, a non-profit that houses women who have dealt with violence, human trafficking or addiction, a concrete and architecture company and a gun reform organization.

Professor of Computer Science Matt Lepinski also attended the event. He expressed his concern in the Q&A of cyber security threat in the nation’s polling system and promoted the National Academy of Sciences and Engineering report of changes to be made in our polling systems. Buchanan said he would like to speak with him outside of the meeting to see what more the government can do to prevent these interferences.

“I was thrilled today to see not only New College students, but also students from local high schools,” Lepinski said. “The issue of gun violence in particular has really helped to mobilize our current generation of students to get more involved in politics. Vern Buchanan represents the second oldest age district of any congressmen, but it’s important to remember that there are families, students and children in this district too,” Lepinski said.

“I thought the crowd had a lot of energy there,” Lobeck said. “The majority of the crowd was holding him accountable when he would avoid questions on issues that were clearly negative for our community and the people he’s representing. He would take a part of the question that didn’t look too bad for himself, and then explain that aspect of it and not really touch on the heart of the question.”

To get involved in upcoming political events, New College Democrats will be co-hosting a panel with Democracy Matters on women in local politics featuring Margaret Good, Liv Coleman, Wesley Beggs, and Tracy Pratt on Wednesday Sept. 18 at 8 p.m. in Heiser 167/168. On Friday, Sept. 20, the Global Climate Strike will be held at the Unconditional Surrender statue downtown. Saturday, Sept. 14 Generation Action will be protesting outside of Vern Buchannan’s Sarasota office to protect Title X and Planned Parenthood.