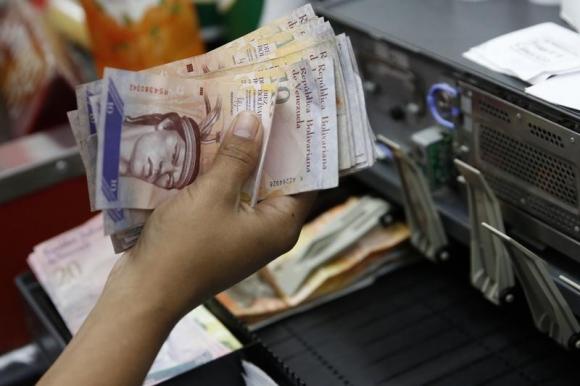 A cashier counts Venezuelan bolivar notes in a state-run supermarket in Caracas.

Earlier this month, U.S. citizens were shocked to read headlines reporting on boxes of condoms selling for $755 on MercadoLibre, a website where Venezuelans purchase goods in short supply. The unavailability of condoms, birth control pills and other forms of contraception are low on the priority list for a country plagued with an “economic warfare” waged by predominantly wealthy, fascist-influenced youths. In a country where abortion has been criminalized but sex work is legal, this deficit of contraceptives can be catastrophic.

“The whole thing makes you feel like an animal under control,” Viviana Gonzalez, a native of Venezuela and a college student at Universidad Metropolitana in Caracas, said in an email. Patrons desperately in need of basic food and sanitary staples are herded into lines by armed officials. “The basic necessities are not being satisfied. I can’t wake up and say that today I will do the laundry, get the groceries I need, and get some medicines at the drugstore.” Gonzalez reports that whenever a product arrives at a store, a surge of people will be waiting in line to purchase it. It is a common fact to Venezuelans that the wealthier population pay off proxies to wait in line for them. Only they can afford to pay the extremely inflated prices to obtain what they need. The rest of the population is not so lucky.

The average minimum monthly wage in Venezuela is 5,600 bolivars; this 36-pack of condoms costs 4,760 bolivars which is equivalent to 85 percent of the average wage.

In 2012, it was reported by the World Bank that Venezuela had the second highest teenage pregnancy rate in South America. Sexual health officials are finding it difficult to prevent the spread of STDs and unwanted pregnancies without contraception.

“Without condoms we can’t do anything,” Jhonatan Rodriguez, general director at StopVIH, reported to Bloomberg Business. “This shortage threatens all the prevention programs we have been working on across the country.”

According to the World Health Organization, people in developing countries make up more than 95 percent of the world’s HIV infections. These are individuals who have limited, if any, access to contraceptives and HIV medications.

“Sex is a basic physiological need, and those who can’t find protection will probably engage in unsafe sex when desperate,” Gonzalez said. Over the past few months, she has watched her friends frantically search every store for condoms and birth control pills to no avail. Unfortunately, a lack of contraceptives does not usually result in a decrease in sexual activity for many people. This is where the risks increase and the danger lies.

“Overall I’d say you’d start seeing illegal abortions done by people who may or may not be professionals,” second-year and VOX co-president Cristina Harty said. “This can lead to higher mortality or infertility rates as abortions become more risky. Even more concerning is that people, especially those that are younger, will be left with unwanted children. Even if they desired, parents may find that they cannot give their children the upbringing they need to be happy adults because it was not the proper time to raise them. This may lead later to higher crime rates and reinforced poverty within the Venezuelan population.”

After Guyana, Venezuela has the highest rate of teenage pregnancies in South America. Without access to birth control, this rate is sure to increase.

Information from this article: