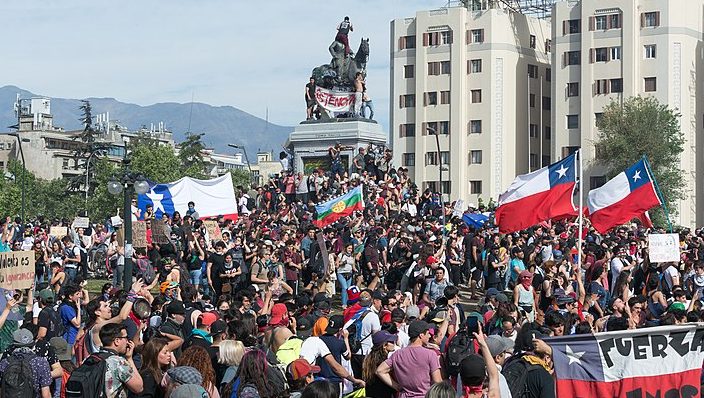 Bedlam and blazes prevail across Chile, one of South America’s most prosperous and stable nations, as the government resorts to a state of emergency in an attempt to grapple with the riots. The unrest was sparked by a four percent increase in metro fares in Santiago, the nation’s capital, amid high income inequality. Twenty lives have been lost in the chaos as of Oct. 26 and nearly 3,000 have been arrested, as arson proliferates and the government struggles to restore order.

When the fare was raised on Oct. 14, few predicted that it would result in anything more than a small story in the country’s newspapers and grumbling among the citizens. It was a price hike agreed upon by a technocratic panel of transportation experts, in response to changes in the cost of living and gas prices. Disgruntled passengers, many of them students, refused to buy tickets, instead bypassing the turnstiles. Among the protestors, the slogan was “Evade, don’t pay, another form of struggle.” By Oct. 20, the civil disobedience grew destructive, leading to 80 of the city’s 136 metro stations requiring significant repairs. Nine were completely burnt down.

Arson in particular has been a problem during the unrest. The headquarters of Enel Chile, the local power company, were firebombed. Protesters torched some of the offices of the country’s oldest newspaper, El Mercurio. Metro tunnels, buses and over a dozen supermarkets have also been set on fire. One clothing factory outside of Santiago was set on fire by looters and five people were burned alive in the building.

Police have resorted to blunt force in their attempts to manage the protests. Rubber bullets, water hoses and tear gas have all been used against looters, rioters and protestors. Police have arrested over 3,000 people and have killed at least one. On Oct. 25, more than one million protestors mustered in Santiago in the largest demonstration in Chile’s history.

“It’s impossible,” Alicia Mercado-Harvey, Visiting Professor at New College and graduate with a Master’s degree in History from Pontifical Catholic University of Chile, said about the day-to-day lives of Chileans during the protests. “I was watching an interview with the president of the metro when this was starting, saying it was a little thing, just a few students, that it was going nowhere, that it wasn’t going to catch on. He couldn’t have been more wrong.”

The price hike in metro fares is considered by the protestors and their apologists to just be the tipping point. Chile is one of the wealthiest nations in Latin America, and the gap between the country’s upper and lowest classes is one of the highest in the world. The Gini Coefficient of Chile is 46.6, around the middle of Latin America and about five points higher than the United States. The Gini Coefficient is the standard measure of income inequality: zero is perfect equality and 100 is perfect inequality. The income inequality is the result of economic policies put in place by the University of Chicago-trained economic advisors to the country’s dictator Augusto Pinochet, known as the Chicago Boys. Chile has had the fastest growing economy in Latin America in the three decades since the Chicago Boys’ reforms, but the stark income inequality has remained.

The government’s response shows how severe the situation has become. Chilean President Sebastian Piñera of the center-right National Renewal Party issued a state of emergency on Oct. 18, as well as a 10 p.m. curfew in Santiago. School has been suspended, both for public safety concerns and to alleviate pressure on the damaged metro system. Additionally, for the first time since the Pinochet regime, the military has been deployed to restore order in the streets.

“The police should have been able to handle the looting,” Mercado-Harvey said. “But instead what they did is send in the military to the streets to a country that has suffered the trauma of having a dictatorship. The last curfews happened in 1987.”

The United Nations Human Rights Chief and former Chilean president Michelle Bachelet has announced plans to begin a special investigation into the situation at Chile, as the conflict continues to grow.

“There was no reason for something that was so menial and so little to have grown into something so big if there wasn’t some underlying cause for it,” Mercado-Harvey said. “And the reason here is income inequality. The reasons for what is going on there are the same as why people here are unhappy. It’s a huge income inequality as a result of the same economic policies.”

Information for this article was gathered from cnn.com, wsj.com, railjournal.com and data.worldbank.org.