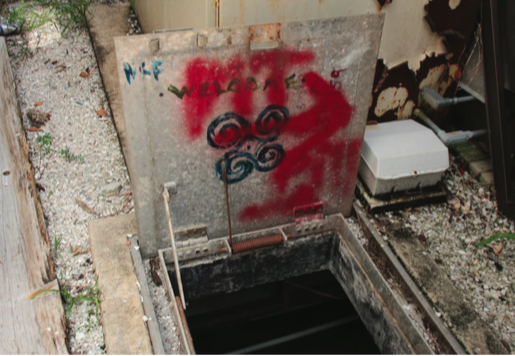 “I’m trying to remember how I got access, I’m not much of a rule breaker so there weren’t any broken locks,” alum Monica Lewman (‘87) said. “I believe the access that I gained was authorized […] I went down just because I was curious, it wasn’t because I was up to no good, I just wanted to see what was down there. We [Lewman and another summer work crew member] went far enough back that we were losing sunlight. We went down during the day, we had no flashlights and I was not a 100 percent sure why I was there.  He [the other summer work crew member] might have been working on pipes, I really don’t know. I do know that it was very apparent that people had been there.”

In the summer of 1989, Lewman spent the months between her second and third year at New College as part of the summer work crew on campus. The then second-year student recollected spending one afternoon in the tunnel system located underneath the Pei residential buildings, this would be her first and only descent into what is now commonly referred to as the Pei tunnels.

According to Associate Director of Facilities Management Alan Dawson, in architect Ieoh Ming (I.M.) Pei’s designs for the dormitories, he included the tunnel system underneath the residential buildings that would later be named after him. Waste from the bathrooms in Pei, including sewage and water that is drained from the bathtubs and showers, as well as electricity and the condensation from the air conditioning, go through the pipes located in the tunnels. Dawson also describes the tunnels as being about four feet tall and six feet wide with at least two or three inches of water due to the ground water rising up to the surface. There are two entrances to the Pei tunnels located in each court, with padlocks making entering the tunnels seemingly impossible.

According to several alums, throughout the school’s history, students would find either unlocked padlocks, or figure out a way to unlock the padlocks themselves, and explore the Pei tunnels.

“It might be worth mentioning that after one excursion down there, the lock was either left off or else left hanging open (subtly, as if it might have been locked but wasn’t) for the better part of a semester,” alum Grant Balfour (‘86) said in an email interview.  “I think someone in authority didn’t mind us going down there as long as we didn’t hurt ourselves or mess anything up.

“It was dark, narrow, mysterious, and illuminating,” Balfour continued. “There was chalk down there, and people used it liberally, along with sharpies and paint and whatever else they could. There were one-liners and names and strange sigils and drawings –- generations-worth of lore and marks, really. People leaving their marks.”

At some point after Balfour’s time, the tunnels transformed from common knowledge to an urban myth about the school’s campus.  The Pei tunnels were the subject of one chapter in alum Nirvan Mullick (‘93)’s thesis, entitled “Fish Eye Guy and Why the Trees Died” centered on New College folklore. Mullick’s thesis included an interview with Rick Doblin (‘83) during a Center of the Universe Party (COUP), then known as Palm Court Party (PCP), that took place in 1997 in which Doblin discussed lining the tunnels with hundreds of candles while telling stories to the younger students. The film, which is only available in VHS, can be accessed from the Jane Bancroft Cook Library.

“I remember hoping that my film might provide a mini-road map on how to find and access the tunnels for future students,” Mullik said in an email interview. “After I finished my film, we screened it in Palm Court during my graduation PCP. We didn’t tell anyone, but we again lined the tunnels with hundreds of candles, hoping that some of the people who watched the film would wander down there. Later that night, about 3 in the morning, I wandered into the tunnels and was super happy to find a group of folks sitting huddled in one of the far ends of the tunnel, sharing stories by candlelight.”

Alum Kara Phelps (‘04) recalls the padlocks being unlocked during her first semester. She went in with one of her friends as well as her then-boyfriend.

“There were papers on the walls referencing people and inside jokes from previous years, mostly from the early 2000s and most of whom we didn’t know,” Phelps said in an email interview. “‘We found a paper on the wall with a Xeroxed picture of the guy who went to New College and had sexual relations with a dolphin–he was kind of infamous at New College, and may still be.”

Having graduated less than decade ago, Phelps was confident in the recreational nature of the tunnels.

“I got the impression that people went down there fairly frequently,” Phelps added.

According to Maintenance, however, there has been no recorded or known incident of any New College student having access to Pei’s tunnel system.

“It seems like it’s kind of folklore,” Dawson said. “We’ve got no knowledge of any students ever being in. We’ve always had them locked since I’ve been here and it appears that they’ve always had locks on them forever. There’s always been stories circulating about the artwork that’s down there and stuff.”

Typically, Maintenance enters the entrances to the Pei tunnels once a month to check on the sewage. However, this can vary from the tunnels being frequented by maintenance several times a month to not at all for months at a time.

Dawson has been working with the tunnel system since he began working at the school in Aug. 2012.

“They’re really cool in terms of being able to see the different graffiti, art and tags people have left down there,” alum Taylor Rothenberg (‘10) said in an email interview. “The one tunnel in Second Court also has a ton of newspaper articles posted to the walls at one end of it. […] I particularly remember an article about the incident that gave the [Devil Chair] its name that was pasted up on one of the walls, which was cool to get a journalistic telling of that story versus the different stories I had heard from other students and alums. That tunnel also has the most graffiti in it of any of the four I went in. The other five are much less ‘explored’.

“It’s funny, too, because they’re so dusty in there that it was obvious when you’d come out that you had been in one of them because you’d have dust all over your pants from crawling around. My goal was to get into all six and I’m a little disappointed that I wasn’t able to, that was partly due to the fencing they started having built around the entrances to them, probably from fear of a liability lawsuit,” Rothenberg added.