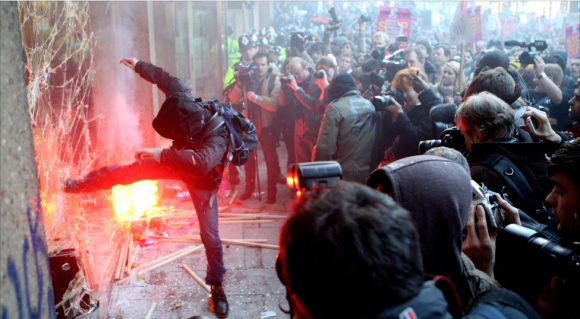 photo courtesy of the BBC

A student protesting proposed tuition increases in the UK kicks in a window in Central London on Nov. 1o. Proposed increases would nearly triple the amount of money students in the UK pay for higher education.

On Nov. 10, an estimated crowd of 52,000 students and teachers took to Millbank, a district of central London, to protest a government proposal that would raise university tuition fees to nearly £9,000 (or roughly $14,381) per year from current rates of £3,290 (roughly $5,257) and would slash teaching budgets by as much as 40 percent. Today, many more plan on walking out of classes to fight the cuts, hoping to send a message to the coalition government led by the Conservative Party and the Liberal Democrats — the latter of which having pledged during last May’s election to eliminate tuition all together.

“Considering every single MP [Member of Parliament] for the Liberal Democrats promised not only to reject a tuition fee rise, but to abolish tuition fees altogether, [the increase] is a very real possibility if they go through with it and vote for the bill,” Christopher Fraser, a third-year student studying at the University of York, told the Catalyst in an interview. “If all of them do vote against it, and there’s considerable enough opposition to the bill from the Labour Party, [which is] possible — the House of Commons is becoming more and more like Congress every day, with the opposition voting against bills simply because they’re proposed by the governing party, then it might be a close one. What people in the U.S. might not realize is that the announcement was almost definitely deliberately timed so that universities couldn’t mobilize a demonstration beforehand — most of what you might call the ‘elite’ universities had only been back for a week or so when the news [of the raise in fees] arrived.”

The tuition fee increases would not take effect until September 2012 if approved as proposed, but Fraser nonetheless thinks that it would be highly detrimental to current students. “Even though the loan system isn’t going to change dramatically — it’ll remain interest-free throughout people’s study and everyone will have access to education — there’s a prevailing mentality that poorer people won’t feel comfortable going to university,” he explained. “And, I mean, that makes sense — there are people going to uni[versity] with no comprehension of the staggering debt they’re going to have later and who laugh it off. On the other hand, there are people whose families are already suffering from being in debt for one reason or another, and the idea of having an extra £30,000 to £40,000 [approximately $48,000-$64,000] to pay back once they graduate can’t be pretty.”

Recent poll data support Fraser’s theory, with a recent Ipsos Mori survey of students across the UK showing that only 35 percent would be willing to obtain a higher education if fees were raised to £7,000 (roughly $11,185) per year — a figure that is lower than the proposed increases.

“Part of the problem is that there’s no transitional period,” Fraser noted. “A lot’s been said about how we’re moving to ‘an American model,’ but that’s flawed to say the least — in the UK, we simply don’t have norms like college funds and saving up to go to university. Throwing it on an entire generation of students with no time to prepare is irresponsible at best — catastrophic at worst.”

Information for this article came from The Guardian.