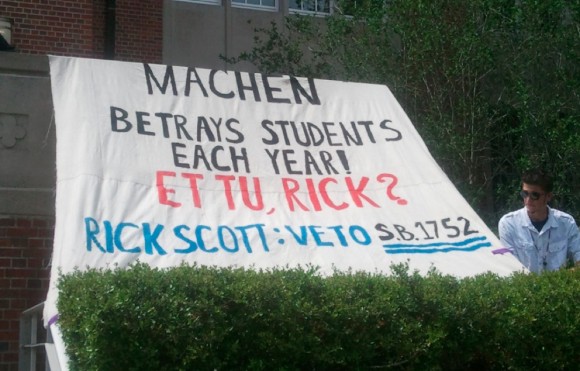 Over the past five years, all Florida public universities have had funds cut again and again, but two of the state’s top universities have decided that if legislature will not hand over the green, the students are going to pay. On Thurs. Apr. 12, Florida State University (FSU) president Eric Barron and University of Florida (UF) president Bernie Machen lobbied Governor Rick Scott to sign Florida’s “preeminence” bill (HB 7129) — a law that would allow certain universities to increase yearly tuition higher than the current 15 percent cap.

With the bill enacted, universities that fit 11 of the 14 requisites designated to accredit a nationally ranked research institution could set a “market-tuition” — giving them the ability to request unlimited tuition increases from their boards of trustees and the Board of Governors for any given year.

FSU and UF are currently the only state universities that fit the weighty criteria, some requirements of which include spending at least $100 million in annual nonmedical research expenditures and generating 100 or more patents every three years.

Currently, the only thing in the way of the bill’s implementation is Scott’s vetoing power. One of Barron’s prime arguments for the bill is that FSU and UF are currently some of the lowest-funded research universities in the country and that they are essentially providing more with less. He maintains that the law will open many doors for the universities as well as promise access to better jobs and research programs. Many argue, though, that the tuition increases will simply make it harder for families to afford a college education.

Florida’s university system has on average the 45th lowest tuition in the country, so students from both FSU and UF can recognize that the price for state education can only go up. According to politicalnews.com, since 2008 the tuition at Florida’s 11 state universities has risen from an average of $88 per credit hour to $119.

“Like it or not, students have gotten a doggone good deal all of these years,” Martin said. “But increases are coming at a terrible time, because just [as] the state’s cutting money, individual students and their parents may be unemployed … students may not be able to find jobs like they used to … So there’s a lot of pressure everywhere, not just with the state but with families as well. So in other years it [might] not be so painful, but it’s reality.”

Martin went on to say that due to state budget cuts and the universities’ sky-high enrollment rate, both schools will begin generating more revenue from tuition costs then state appropriations within the coming year — all the more reason to lobby for a bill that grants further tuition increases.

“They’ve passed the 50/50 mark,” Martin said. “We are lucky. We’re still getting more of our dollars from Tallahassee … Our operating costs are paid 72 percent from Tallahassee with the rest coming from tuition.”

Students from both universities have not taken the bill lightly. FSU and UF student governments have passed resolutions as well as collected thousands of petition signatures to demand that Scott veto the bill.

“Last December there was a rally of about 200 people that marched to the BOT meeting and really voiced their opinions,” UF sophomore and lead organizer for Gainesville’s chapter of Students for a Democratic Society (SDS) Michela Martinazzi said. “So generally students on campus are not happy with this.”

“Our primary demand in general in SDS … is that, if we have to feel our wallets becoming smaller so should the administration,” Martinazzi said. “Overall we don’t see any forms of benefits coming from this tuition raise except for … our administration building continuing to be comfortable in the current situation.”

Many student groups, including SDS, have banded together under UF’s umbrella organization, the Gator Student Alliance, to fight tuition hikes, Marinazzi claimed.

“Last semester during the [student] election we gathered over 2,500 signatures to put a referendum on the student’s election ballot and [an] overwhelming 90 percent of students voted against tuition hikes … and of course 10 percent [are] out of their minds and have their parents pay for everything,” Martinazzi said.