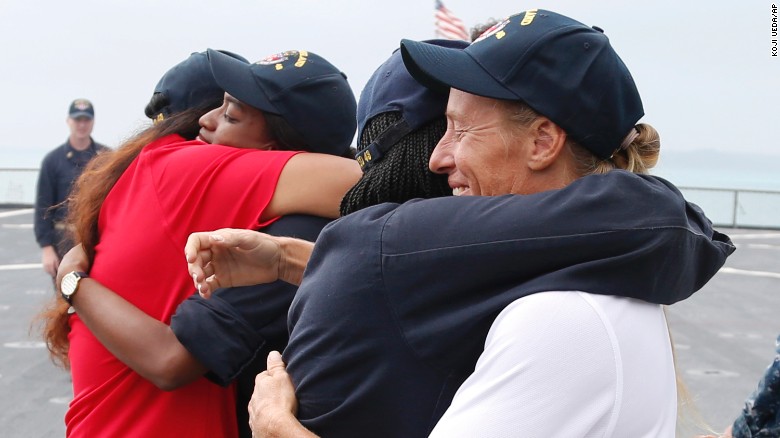 Jennifer Appel, Tasha Fuiava and their two dogs were stranded at sea for almost five months after straying off course in route to Tahiti. The two women and their pets were rescued by the U.S. Navy almost 900 miles southeast of Japan and thousands of miles away from their destination. The pair and their companions set sail from Hawaii on May 3, their destination would be Tahiti about 2,600 miles away. They first ran into trouble on May 30, when bad weather caused their engine to flood, with the ship’s mast damaged as well, their ability to maneuver was limited and by then they had strayed off course in their attempts to continue sailing. Panic struck when the duo lost communications.

After two months had passed–the expected time it would take to arrive to Tahiti–the two Hawaii residents began to send out distress signals, however they were too far from other boats or land stations to be heard or detected. A year supply of food consisting of rice, pasta and more as well as a water purifier on board kept the passengers alive. However, food would not be the only thing the women had to be worried about, as the pair went through two separate shark encounters. One incident consisted of the boat drifting into a school of Tiger sharks, and the other occurred when a shark began to slam itself into the boat’s hull.

After nearly five months at sea, the boat was spotted by a Taiwanese fishing vessel which contacted the National Coast Guard to aid in the rescue of the women and their dogs.

Information for this article was gathered from cnn.com