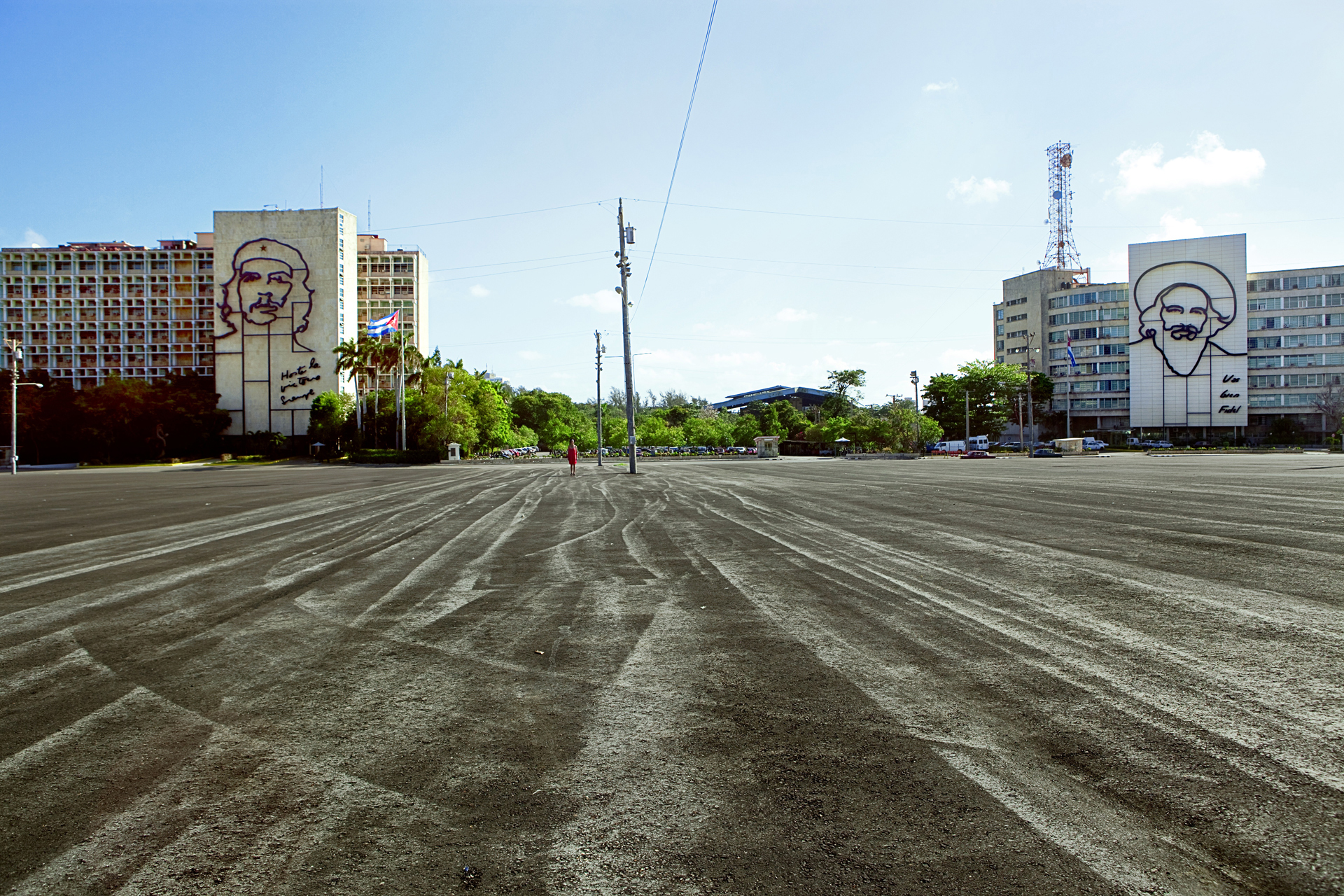 all photos courtesy of the Ringling

In a shot from Coco Fusco’s 2012 video project La Plaza Vacia, minimalistic outlines of Ernesto “Che” Guevara and Camilo Cienfuegos frame a massive slab of concrete. A golden halo of light encircles the faces of the two Cuban revolutionaries as the sun sets over the deserted plaza. As the sky turns a darker and darker shade of blue, their golden outlines become the dominant feature of the landscape. In the background, a narrator discusses the historical shift in the Plaza’s purpose and significance. Once the place where thousands of Cubans gathered to celebrate the promise of a better socialist future, Havana’s Plaza de la Revolución is now home to just a smattering of tourists and the occasional government-sanctioned event.

La Plaza Vacia is one of four videos currently on display in the Ringling Museum’s Monda Gallery for Contemporary Art. Part of Twilight, a mixed-media exhibition of Fusco’s work, the videos explore Cuba’s post-revolutionary artistic and cultural legacy. Fusco, a Cuban-American artist and writer, was invited to show her work at the Ringling after winning the 2016 Greenfield Prize, a $30,000 commission awarded by The Hermitage Artist Retreat to promote the creation of new work that would connect the Sarasota community with a culturally-relevant contemporary artist. The work Fusco created, entitled Vivir en junio con la lengua afuera and completed in 2018, features the contemporary Cuban poet Amaury Pacheco and actors Lynn Cruz and Iris Ruíz reciting the poem “Introduction to the Symbol of Faith” by the mid-century Cuban poet Reinaldo Arenas.

The video’s setting, the amphitheater at Lenin Park in Havana, is significant for both its reference to the Cuban Revolution’s communist roots and its history as the place where Arenas hid after he escaped from prison. A vocal critic of the post-revolutionary regime and an openly gay man, Arenas was incarcerated by the Cuban government in the 1970s for his writings and was later forced into exile, escaping to the United States as part of the 1980 Mariel boatlift. As they sit on the Romanesque limestone bleachers of Lenin Park, Pacheco, Cruz and Ruíz fluctuate between confidently reciting the poem from memory and stumbling over the lines as they read from a crumpled piece of computer paper. At a couple of moments in the 24-minute film, all three recite the poem together in perfect unity. Their voices combine into a hypnotic wave of sound that fills the gallery. It is in these moments that the video achieves its purpose, transforming Arenas’ poetry into the revolutionary chant of a generation of artists who have dedicated their lives to challenging the Cuban government’s attempts to control artistic production.

Pacheco, Cruz and Ruíz have all experienced detainment by the Cuban government in the past year due to their outspoken criticism of Decree 349, legislation passed by the Cuban government in April 2018 that granted the government additional authority over artists and performers. The Decree, which went into effect in December 2018, prevents all artists from operating in private or public spaces without prior approval by Cuba’s Ministry of Culture. Individuals or businesses that hire artists without prior authorization can be sanctioned, and artists that create work without prior approval can have their materials confiscated or be substantially fined.

“Vivir en junio con la lengua afuera is incredibly powerful because it’s responding to things going on right now in Cuba,” Chris Jones, the Ringling’s curator of photography and media art, said. “It’s a really moving piece both in terms of its use of the medium, and its focus on seeing these artists respond to a poet from a previous generation and reflect on his relevancy today.”

Poetry is a recurring theme in Fusco’s videos. Three of the four videos on display in Twilight focus on the lives of poets who were prosecuted by the Cuban government for their public critique of the post-revolutionary regime.

“The story of the revolution is told most eloquently and often tragically through poetry,” Fusco added in an email interview.

In the 2015 film La confesiòn, Fusco presents the story of poet and journalist Heberto Padilla Lorenzo, who was imprisoned, brutalized and forced to make a public confession of government betrayal—setting the precedent for how the Cuban government would deal with future dissenters. In La botella al mar de María Elena, also created in 2015, poet and activist María Elena Cruz Varela discusses her involvement with Criterio Alternativo, a group of independent Cuban intellectuals, and her subsequent two-year imprisonment for treason.

“Fusco is focusing on these artists who are trying to find a voice in the political sphere in Cuba, and who are often shut down if they are critical in any way of the revolutionary project or of post-revolutionary life,” Jones said. “She has been looking at what’s going on in Cuba now—as the government has transitioned from the Castro regime into something new—where artists are still facing repercussions for voicing their dissent.”

The last work included in Twilight is neither a video installation nor a reflection on contemporary Cuban politics. Tin Man of the Twenty-First Century, created by Fusco in collaboration with sculptor Chico MacMurtrie, explores the role of the artist in American politics in the form of a monumental aluminum, steel and nickel-plated resin sculpture of President Donald Trump.

“I think we can all agree that the atmosphere of politics in the U.S. has certainly changed since Donald Trump was elected,” Jones said. “Coco wanted to use the platform of the exhibition to also respond to politics in the U.S., so she proposed creating Tin Man of the Twenty-First Century.”

The sculpture even includes an interactive component.

“At certain times in the run of the exhibition the public was allowed to come up and squirt oil on the tin man’s joints,” Jones added. “Coco had made these oil cans with the Gazprom logo—that’s the logo of the Russian state oil company.”

Twilight closes on Sunday, Feb. 17. As part of the show’s closing, the Ringling is hosting a panel discussion on the role of museums as civic spaces Sunday, Feb. 17 at 1 p.m. This panel discussion will include Ola Wlusek, Keith D. and Linda L. Monda curator of modern and contemporary art, Chris Jones, curator of photography and new media and Sarah Howard, curator of public art and social practice at USF CAM. As with all exhibitions at the Ringling, admission to Twilight is free to all students and faculty with the presentation of a valid New College I.D.