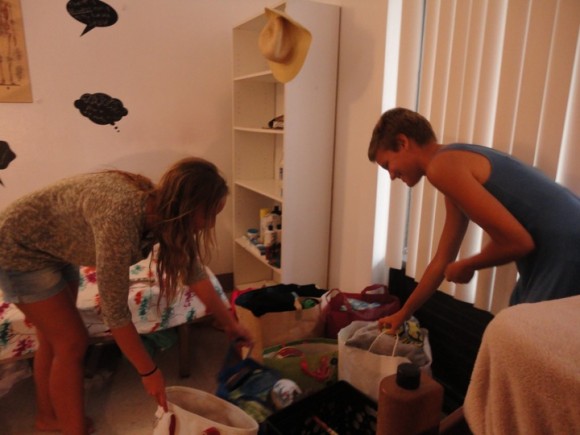 Fisher and Grace sort through items they collected for HEP. “[HEP] is the kind of place that’s about helping yourself,” Welsh said.

On April 13, students went around campus exchanging cookies for canned foods, clothes, furniture and a variety of other goods, which were then donated to the Homeless Emergency Project (HEP) in Clearwater. The inaugural collection brought in eights big bags of clothes, several boxes crammed with canned food and miscellaneous items such as a cell phone charger and camera.

Fisher and first-year Taylor Welsh interned with HEP this year for their Independent Study Projects. Both are currently taking the service learning tutorial Food, Nutrition and Poverty and decided to get the whole class involved with HEP.  “It’s nice to have a class with 30 kids helping us,” Welsh said.

Welsh said there is also a donations box in Hamilton “Ham” Center where students can drop off items at any time. Both Fisher and Welsh will go around campus again on April 20 to collect more items. “We were really happy with this last night alone,” Fisher said. “It’s awesome — we didn’t think anyone would have heard or donated on the spot but people were really responsive.”

Both Fisher and Welsh plan to collect more donations as the semester draws to a close. “We’re trying to do it as an end of year thing because we know that there’s a lot of waste here at New College in regards to furniture and everything,” Welsh said. “When everybody moves out, they just throw their stuff in the dumpsters. It’s sort of a mutually beneficial thing, because [HEP is] always wanting donations and we’re going to have a waste problem when everyone moves out.”