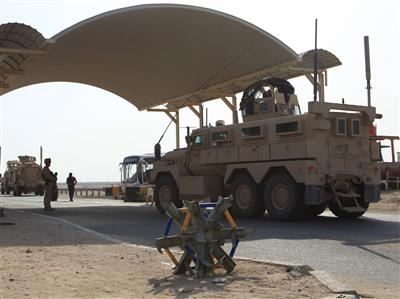 The last of the Marines to leave Iraq, cross the border into Kuwait.

Military Humvees are already shipping out through U.S. military Victory Base Complex, stationed near Baghdad, Iraq.

On Friday Oct. 21, President Barack Obama announced to the country and the world that the United States would be withdrawing the troops currently posted in Iraq. The move, which is supposed to be completed by Dec. 31 this year, has been both hail and condemned by opposing ends of the political spectrum, but the White House remains firm in their defense of the action.

For the troops themselves, whether currently on active duty, leave or in the reserves, this recall has no doubt brought up a lot of emotion. Second-year Benjamin Merlino, who is a Boatswain’s Mate Third Class in the United States Coast Guard, especially had a lot to say about the withdrawal.

“[My first reaction was] it wasn’t true,” Merlino said. “They’ve said things about withdrawing troops before. And I’ve seen, first-hand, weeks after saying that, people going right where they said they were withdrawing from […] I sure as hell hope they do it. I have a lot of friends I want to see back here, people I haven’t seen for a year and a half, two years.”

It has been reported that over the next two months, groups of soldiers will be evacuating Iraq, until eventually only 160 servicemen will remain in Baghdad to provide security for the embassy there. Merlino, however, suggested that this might not be true.

“They say that they’re withdrawing troops but they will be leaving a contingency, in case something goes wrong,” Merlino clarified. “So really, they’re not withdrawing all of the troops. And if you think about it, [the armed forces] are not going to be able to fully take everybody out. They’re trying to get the majority out and just have the bare minimum there, but they’re trying to get out because they think the job is done. If you think about all of the troops over there, to get them over here is a monumental task.”

The other position to consider is that while many American families will be looking forward to having their sons and daughters back home by the end of the year, withdrawing from Iraq does not necessarily mean that the soldiers will be returning stateside.

“You should also consider that it could be possible that while they’ll get them out of Iraq, that doesn’t mean they’ll be coming back here,” Merlino added. They could take them out of Iraq and put them in Afganistan, put them in Kuwait. Send them to Germany. Send them to Japan, to South Africa. They won’t necessarily be coming back to their homes, they’ll just be leaving Iraq.”

The reason behind the withdrawal, according to the White House press briefing, is that the U.S. has helped Iraq become “secure, stable and self-reliant,” which is why they are calling the nine-year invasion a success. However, many current Republican presidential candidates have been vocal in their disdain. Mitt Romney, for example, referred to the move as “an astonishing failure to secure an orderly transition in Iraq,” though he was rather ambiguous about what that failure is. The question on many minds is whether or not the security, stability and self-reliance will continue once the withdrawal of Iraq is in effect.

“It’s like having your parents help you through a hard time in life,” Merlino explained. “Now they have to develop their own government and country, without us and our unwanted help.”

Since the original occupation of Iraq in 2003, 4,471 servicemen have died in “Operation Iraqi Freedom.” The overwhelming majority of the deceased soldiers have been between the ages of 20 and 30.