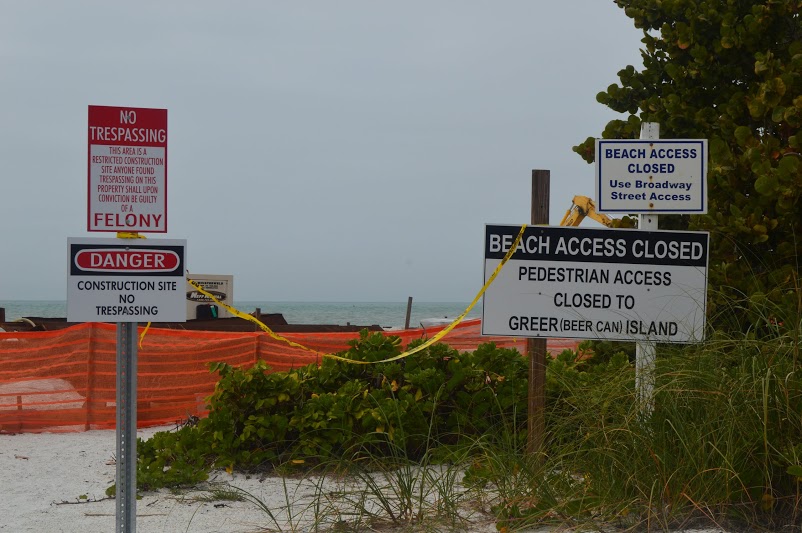 With construction underway, future visitation to Tree Beach is in question.

Tree Beach is the semi-secret haven where a few members of the Longboat Key community as well as New College students go to enjoy music, partying, swimming, tree climbing, photography and picnics on a small hook-shaped beach. Also known as Greer Island and Beer Can Island, in recent years the beach has suffered from increased erosion and the Australian pines that grow on its shore have become intertwined. This has led to dangerous access points to the beach and now a construction program is underway to fix the erosion problems, but some beachgoers and boaters worry it will end recreational use in the area. In the past boaters have pulled right up to the shoreline to fish, but after the project is completed that will not be possible. Tree Beach is not the only beach that has been affected by erosion at Longboat Key, but it is a spot that many New College community members, past and present, have appreciated.

“The last time I tried to go to Tree Beach I couldn’t get to it because of all the construction,” third-year Sydnie Petteway said.

In addition to a decrease in recreational use of the beach, property values could also be affected. An issue is that the homes in the area have been built too close to the shorelines, creating greater erosion.

In the Longboat Key News, Editor and Publisher Steve Reid writes, “The economic pressure has ushered in another set of beach engineers and Town Commission adopting a far different approach that targets addressing hotspots – areas of severe erosion – and structural solutions such as cement groins to trap sand and stand against the ravages of wave action.”

In 2014, Longboat Key Town Manager Dave Bullock proposed a plan to hire the Olsen Engineering firm to upload sand and create a protective beach over the course of several months using many trucks and other heavy-duty equipment.

The total cost of the beach restoration projects is $3,529,636, according to the Town of Longboat Key Project Detail.

“A couple thousand trucks will be noticed for weeks and weeks and weeks,” Bullock told Longboat Key News. “It will be a conga-line of trucks coming in and out and going on the beach and dumping sand all day. It is unlike a dredge, which is relatively silent. This is a bunch of disruption.”

“I have never had the time to go to Tree Beach,” second-year Hannah Carlo said. “Since it is under construction I don’t know if I will get the chance to go.

If the beach were further eroded, it would be impossible for recreational visitation as it has been now and in the past. At present time, it is only possible to reach the beach at low tide and only through a low stretch of semi-dry land with low-hanging vegetation. It is not doable for the elderly and children, unless they come on a boat, which will not be possible after the reconstruction.

“Beer Can Island will continue to erode and at a faster rate,” Reid writes. “There could one day be a breach or break on the north end of Beer Can Island and it would then become a true island once again.”