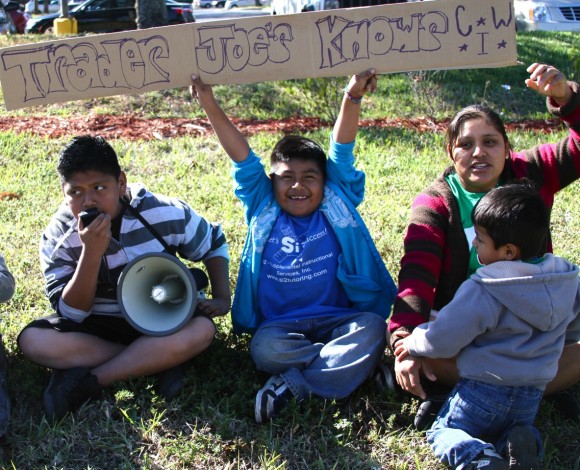 CIW members and their allies protest at a Publix Greenwise Market in Naples; since Trader Joe’s signed onto the Fair Food Agreement, the group shifted an already-planed event to the Publix outlet.

By Eva Gray and Corey Rodda

Trader Joe’s, one of the nation’s largest gourmet and specialty supermarket chains, opened its first Florida location in Naples on Feb. 10.  After several years of campaigns by the Coalition of Immokalee Workers (CIW), the grocer signed onto the Fair Food Agreement.

The contract with the CIW means that Trader Joe’s would comply with the Fair Food Program, along with the Fair Food Code of Conduct. Now, farmworkers in Immokalee who pick tomatoes sold at Trader Joe’s will receive one more penny per pound of tomatoes they pick in the fields, raising their daily wages closer to the minimum wage. Also, the Code of Conduct will allow for stricter enforcement of humane labor practices, including guidelines against sexual harassment and inhumane working conditions and a zero-tolerance policy against slavery.

“They knew that they would receive a good deal of bad publicity were they not to sign the agreement,” Jordan Buckley of Interfaith Action Network said. “By Thursday, 41 cities had announced Trader Joe’s protests centered around the sunshine state debut of Trader Joe’s.”

In their campaign for Fair Food, the CIW has used “brandbusting” to tarnish the supermarket’s image as a socially responsible food purveyor, dubbing them “Traitor Joe’s”. One student-farmworker activist centered in San Francisco used the tune to Lady Gaga’s “Alejandro” to plea for Trader Joe’s to sign the agreement.

Before Trader Joe’s signed onto the accord, the CIW had planned an action for the weekend of the store’s grand opening in Naples. CIW members and allies had planned to bike from Immokalee to Naples in protest of the chain’s reluctance to sign on. When Trader Joe’s announced that they signed the agreement, the CIW shifted the focus of the action to a Greenwise Publix on the same street, Immokalee Rd. The dozen-some bike riders stopped by two Publix stores and spoke to their store managers before they met 250 protesters, who had travelled from across Florida, at the Greenwise Publix.

To date, Publix is still a holdout in the supermarket campaign. From March 5-10 farmworkers will fast in front of Publix headquarters in Lakeland to protest Publix’s “insensitivity to the plight of farmworkers in its home state.” Buckley welcomed New College students to come to Lakeland and stand in solidarity with the farmworkers, who he said must often go without food when there is a freeze and they cannot pick tomatoes from the fields. There will be candlelight vigils on each eve of the fast and the five days will culminate in a three-mile procession. Currently, Trader Joe’s and Whole Foods are the only grocers to have acquiesced to the CIW’s demands.

In addition to Publix, Stop-n-Shop, Safeway and Kroger are the targets of ongoing campaigns in the CIW’s fight for supermarket compliance.