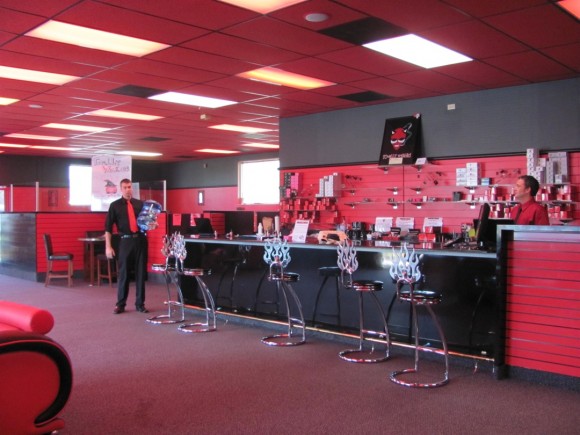 Red-tinted lighting creates a mellow ambiance in this spacious room filled with vapor and British accents. The smoking joker sits at a far table, spitting image of the devil and the mascot for Totally Wicked Vapers’ Lounge, a retail store for electronic nicotine imitation cigarette (or “e-cigarette”) products that the business sells online. Just a 10 minute drive from campus, it is the only shop of its kind in Bradenton, according to lounge manager and technical specialist Justin W. (who asks that his last name not be printed).

“There are companies that operate in flea markets and other such similar environments,” Justin said, “but as far we know, this is the very first retail outlet [of e-cigarettes] that offers specialist advice to prospective consumers.”

The body of an e-cigarette consists of a battery, atomizer and cartridge. The cartridge is the mouthpiece and contains absorbent wadding soaked with e-liquid, a solution of nicotine dissolved in propylene glycol, but free of tobacco. When one inhales through the mouthpiece, the atomizer vaporizes the e-liquid to deliver doses of nicotine to the “vaper,” as users of e-cigarettes are called. Pulling on an e-cigarette is known as “vaping” in contrast to smoking a standard cigarette since nothing is set ablaze in the process.

Upon entering the lounge, one faces the vapor bar, resembling a typical bar but with shelves stocked with e-cigarette kits rather than alcoholic beverages. The store is overwhelmed with red and black, from the walls and couches to the dress of staff. A pool table and dart board provide entertainment for vapers, while a coffee dispenser offers espressos, macchiatos and lattes all for under $2.

The vapers’ lounge does not sell all the inventory available online, but still offers a range of individual e-cigarette components, battery chargers and e-liquids of various flavors and nicotine strengths. Two all-inclusive starter kits are also sold in the shop: the smaller Titan 510 costs $29.99, and a version with a larger battery, the Tornado, sells for $39.99. The kits come with a choice of either generic tobacco or menthol flavor.

“For those that are really quite heavy smokers we sell the Tornado,” Justin said. “It has a much larger battery, which we certainly—myself, and my colleagues—we use this predominantly because it gives you the equivalent of a pack of cigarettes before it requires a recharge.”

Prepackaged e-liquids are available in six flavors: apple, menthol, mint chocolate chip, red cowboy, strawberry and a generic tobacco flavor, all manufactured by a China-based company called Red Label. These e-liquids are sold in volumes of five milliliters, 10ml, or 30ml,  priced at $6.99, $12.99, and $29.99, respectively. Justin asserted that a 30ml bottle would last a pack-a-day smoker two to three weeks.

For a greater variety of flavors, the lounge has a mixing station which sells e-liquids produced by the U.S.-based Patriot Range and by the UK-based Decadent Vapors. These e-liquids are sold in a five milliliter volume and cost $4.99. Flavors include banana, passion fruit, rhubarb crumble, as well as perhaps unexpected flavors such as roast chicken and chestnut. Additionally, vapers can ask for a custom flavor. According to assistant lounge manager Jesse W. (who also wishes that his surname not be revealed), one of the most popular requests is pina colada, while his personal favorite is raspberry menthol. Alcoholic flavors are also available, such as whiskey or absinthe. Some of the vapors contain caffeine as well the nicotine.

While some vapers cite e-cigarettes as a healthier alternative to traditional cigarettes, Totally Wicked does not endorse such claims and the products are not inspected by the federal Food and Drug Administration.

“There are individuals who may have stopped [smoking cigarettes] via this route, but it’s not one that we support because there isn’t the clinical testing currently in place,” Justin said. “It would be unethical to claim health benefits … it would also be unlawful.”

The lounge opened this past May, while Totally Wicked was born in England in 2008. Initially, their products were only sold online. After company manager Jason Cropper established a partner in the U.S., Justin came over from England to help set up shop in Bradenton.

“People would buy off the Internet and they’re running a risk,” Justin explained. “Some would buy a product that’s not particularly suitable to them. We’re trying to avoid that with having a special sale center where we can tailor make products for the individual.”

One of the benefits of the lounge is that new vapers can expect a lengthy tutorial from staff on how to fit together the pieces of the e-cigarette and the proper technique of vaping, which can seem alien to those versed only in standard cigarettes.

“You do apply pressure to the mouthpiece when you’re inhaling, but don’t suck in like you would with a cigarette,” Justin explained. “That makes all the difference.” He demonstrated his own mastery of the craft, pulling on the mouthpiece for several seconds, then exhaling to produce a thick cloud of white vapor.

As far business goes, Justin claimed the lounge has been doing well and that the vaping market is expanding.

“It’s very likely we [in Bradenton] have the greatest density of vapers than anywhere else,” Justin stated. “Certainly in the US.”