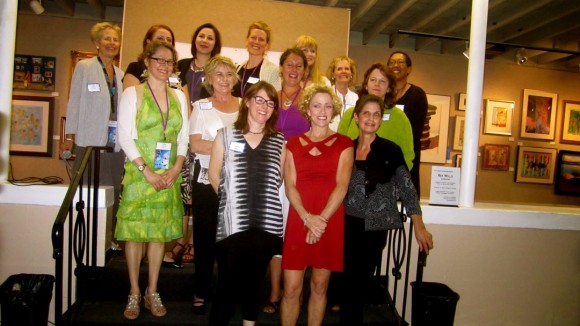 The Filmakers Reception brought out several of the writers, directors and producers of the documentary features and narrative shorts featured in the Through Women’s Eye’s Film Festival. Each person introduced their film, role in production and how it felt to be part of TWE. Paula Hoffa (2nd from right, bottom row) whose experience is recounted in the film “The Invisible War” (2012,) which tells the story of sexual violence in the military, noted the importance of TWE in bringing up important issues and moving people towards action, “after seeing the film I cant help but say you’ll be compelled to move towards being involved and helping solve an epidemic nobody was really paying attention to until this film came out.”

TWE was presented by the Gulf Coast Chapter of UN Women, which, according to their website, advocates for the empowerment of young women, education and events that “highlight the successes of women and girls [in the U.S.] and abroad.” With the help of Women Make Movies, a leading distributor for films by and about women, TWE showcases up-and-coming filmmakers, along with seasoned directors, producers and actors.

The Catalyst attended the Filmmaker’s Reception of TWE on Sat., Apr. 14 , held at the Art Center Sarasota. The reception serves as a major fundraiser for the festival, and guests paid $75 for antipasto platters, a wine bar and an intimate setting with the filmmakers.

One such filmmaker in attendance was Lori Joyce, director of the 80-minute documentary Arise, which played on Saturday as part of TWE and then again on the last day of the SFF, Sun. Apr. 22. The Catalyst sat down for an interview with Joyce:

Could you tell us a little bit about your film,  Arise?

“It’s about women all over the world who are taking leadership roles in environmental issues in their communities, their villages, their cities. So we have footage from Kenya, India, Ecuador, Israel and several places here in the U.S., with amazing women like Majora Carter in the Bronx [and] Winona LaDuke in the White Earth Reservation. We chronicled Wangari Maathai’s Greenbelt Movement and Vandana Shiva in India. We’re just overwhelmed with the response … people seemed to love it … it did what it was intended to do — go out and inspire women to do more to protect the earth.”

How many screenings have you been a part of so far?

“This is just our second, we just released in February. We won the Spirit of Activism Award at the Colorado Environmental Film Festival.”

How long did it take you to make the film?

What gave you the inspiration for the film?

“It didn’t start out as an environmental film, it started out as a women’s empowerment film [about] what women are doing in so many arenas around the world. So we had to focus somewhere, so we decided [to ask]: what’s our most urgent issue affecting our planet today? Obviously it’s climate change and global warming.

“And I have to quote Robert Redford — he said ‘The environment should be put in the category of our national security. Defense of our resources is just as important as defense abroad. Otherwise, what is there to defend?’ That’s kind of how it evolved.

“It is a women’s film, but at both screenings we’ve had more men come up to us afterwards — it’s been really powerful for them. I’ve had men tell me that they were moved to tears. We had an ex-police officer come up to us in Colorado saying that it changed his life.”

Information for this article was taken from www.throughwomenseyes.com and unwomen-usnc.org