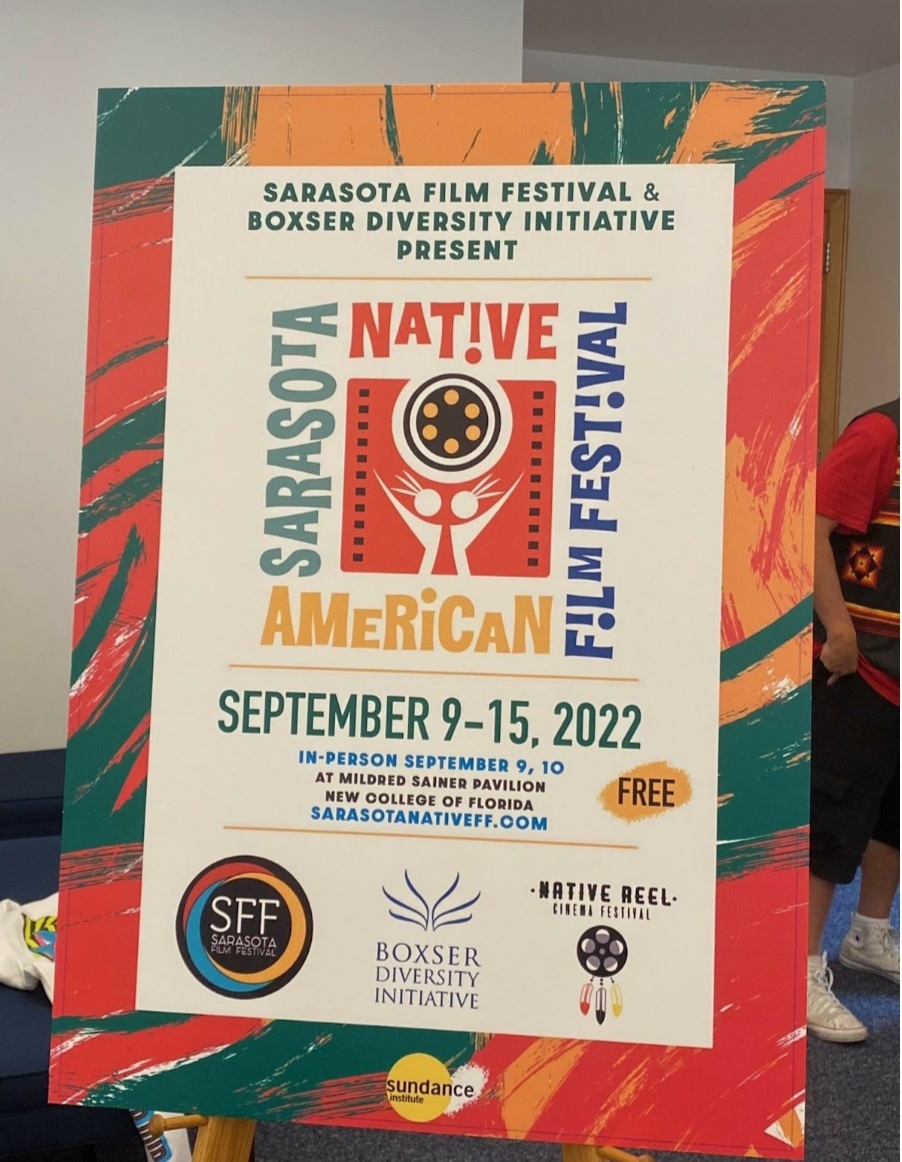 Even during a stormy afternoon, the Native American Film Festival 2022 maintained an impressive audience. Audience members sat eagerly in the seats of Mildred Sainer Pavilion on September 9th to watch renowned artists such as Shaandiin Tome and Wilson Bowers showcase their talents. The highlight of the event was the Sundance Indigenous Short Film Tour, which has been showcasing upcoming native filmmakers annually since 1978. This tour has allowed filmmakers to bring forth pieces that focus on awareness of indigenous culture and widespread discrimination. Not to mention Yessid’s Street Taco Truck, which cooked up flavorful Birria tacos that brought life to the event despite the gloomy weather.

The Sarasota Film Festival sponsored this year’s Native American Film Festival, alongside the Sundance Institute, the Native Reel Cinema Festival and the Boxser Diversity Initiative, along with projects such as the Visions of the Black Experience film showcase and educating Booker High school students on cultural diversity through theater. Founder of the Boxser Diversity Initiative and Harvard graduate Dan Boxser spoke about his inspiration behind the program.

When interviewed, Mr. Boxser discussed the importance of indigenous awareness, and about the abundance of indigenous land in Sarasota and the desire to educate those who know little about native American cultures: “How many indigenous people do you know?” This statement speaks volumes about how indigenous culture is often ignored or thought to not exist.

Each of the films presented served different educational purposes. Whether that be culture, awareness of indigenous issues or ethnic discrimination, the films were executed beautifully. Audiences had a great reaction characterized by a series of concerned faces, gasps and laughter at comical moments in the short films.

One such film was Somebody’s Daughter directed by Alex Robinson and Rain, which raised awareness on missing indigenous women, domestic abuse and the prevalence of crime in native reservations. Robinson and Rain brought light to the lack of federal legislation on reservations and the “socio-economic bondage” that inflicts fear on native families.

Somebody’s Daughter was described as “both hauntingly beautiful and emotionally devastating and should be recognized as one of the most important documentaries made,” by Native News Online

“As we were in a public space, tears rolled down my face, however, I wept silently for all the missing and murdered Indigenous Peoples,” from the director of Institute of American Indian Arts, Patsy Philips.

Tome is a Navajo cinematographer who had a special spotlight during the Native American Film Festival. Tome was recognized for her award-winning films such as Long Line of Ladies and Mud during the event. These awards include the Documentary Shorts Jury Award at SXSW,  Marie Claire’s Top 21 Creators to Watch in 2022, selection for the Sundance Creative Producer’s Fellowship in 2019 and the James F. Zimmerman award. Not to mention her involvement in major media companies such as National Geographic, ESPN and PBS.

Her success was followed by an abundance of positive consumer reviews, such as a “distinct and engaging directorial style” or an “unexpected treat” Tome’s style of filmmaking gives audience members a visual experience unique to other short films. The pieces invoke emotion and show Tome’s raw talent.

Another highlight was Bowers, who is a Seminole graphic artist residing on the Hollywood reserve. Bowers has a bright cartoon-like style that is pictured in murals such as “The First Mothers” in South Macomb Street, Tallahassee as well as street art in the Hollywood reserve. Bowers hosted a live painting session at the Native American Film Festival where he explained and demonstrated his processes to onlookers. His use of bright neons and individual style engaged attendees.

Muralist Bowers and filmmaker Tome were both involved in a Q&A event which revealed their inspirations for their artistry.

Tome stated during the when asked about her message, “I think for me creating indigenous narratives that push forward how non-indigenous people see us and also how we celebrate ourselves,” Tome said. “Using film as a medium to try create and tell our stories and not the other way around.”

When asked the same question Bowers responded, “My father is a woodcarver and my mother is a seamstress, so I kind of have the creative blood in me,” Bowers said.

The artist’s heritage has taken a clear role in their work, which is why diversity in artistic spaces should be valued. Both artists have bright futures in the industry and their growth will only continue after this opportunity at the Native American Film Festival.

Although artists are not receiving monetary payment for the showcase, staff mentioned in an interview that “it’s the networking that’s beneficial to them, the festival helps with networking.”

New College alumni, students and professors all came together to celebrate Native American culture and bring awareness to indigenous issues. The artistry and beautiful cinematography were both educational and beautiful. The Boxser Initiative along with its organizers hope to continue multicultural showcases throughout the upcoming years and continue highlighting marginalized communities. Students and community members can donate to the cause and mark their calendars for upcoming events at The Boxser Diversity Initiative Website.

The staff mentioned during the event that they want to continue funding for the showcase and make it bigger the next time around. Be on the lookout for the Native American Film Festival 2023!