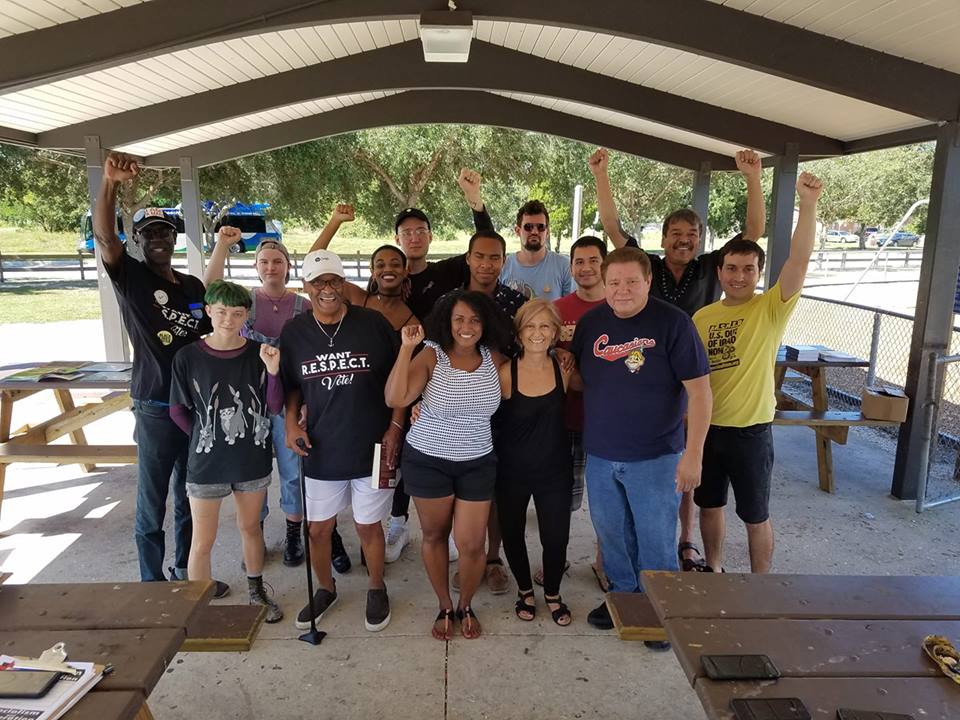 On Oct. 20 Answer Suncoast and The Party for Socialism and Liberation (PSL) hosted their third Liberation Breakfast in Newtown Estates Park, focused on honoring indigenous peoples and discussing the history and current struggles faced by indigenous populations. The history of Indigenous People’s Day, both national and internationally, was discussed. Sal Serbin, a member of the Sioux Tribe, and Larry Knudsen, a member of the Ho-Chunk Nation, gave speeches about issues relating to the relationship between Native American reservations and the U.S. government. Knudsen is a descendant of Susan La Flesche Picotte, the first Native American person to earn a medical degree in 1889. She was an advocate of public health and social reform.

Indigenous People’s Day is held every second October of the year, the same day as the nationally-recognized Columbus Day. In recent years, Columbus Day has faced rising criticism from social activists and social justice groups for promoting the celebration of the United States’ history of colonization and genocide. Columbus Day became a federal holiday in 1937 in response to Roman Catholic American-Italians’ movement to incorporate Italian history into celebrated American history and combat social stigma around Italian ethnicity. According to Office Holidays, Columbus Day is no longer observed by cities in Alaska, Arkansas, California, Delaware, Hawaii, Iowa, Kansas, Kentucky, Louisiana, Michigan, Minnesota, Mississippi, Nevada, North Carolina, North Dakota, Oklahoma, Oregon, South Carolina, Texas, Vermont, Wisconsin and Wyoming. Certain cities in these states have started celebrating Indigenous People’s Day instead. The first city to replace Columbus Day with Indigenous People’s Day was Berkley, California on Oct. 12, 1992. There are four states that have adopted the holiday statewide: Alaska, Minnesota, Vermont and South Dakota. However, activists argue that one day of acknowledgement does not fix the devastation of five hundred years of colonization.

“If you want to go to a third world country, you don’t even have to leave [the United States], just go to a reservation,” Serbin said. “There are people freezing to death each year.”

Serbin explained that these deaths can often be attributed to the housing on reservations. Most people live in trailers that are occupied by more than one family. Native American reservations face issues of poverty and laws designed to keep them out of power.

Environmental destruction caused by pipelines and fracking on reservations pollutes land and water sources. Plans to mine for uranium in South Dakota have been postponed for another year because of an inadequate cultural resource survey of the land in regards to the Lakota Sioux Native Americans. Another battle to prevent uranium mining is happening with the Oglala Sioux Tribe on the Pine Ridge Indian Reservation. The Oglala Sioux Tribe has resisted uranium mining in the past with The Wounded Knee Incident in 1973. Not only does the mining destroy the land, but there is also a history of burial mound destruction to make way for private property, highways and pipelines. Pipelines require fossil fuels in the form of crude oil. When these pipes leak, they ruin water sources.

“In reservations for the Navajo Nation, the water quality is worse than Flint’s,” Serbin said.

Ruth Beltran, a member of Answer Suncoast and PSL, finished her presentation at the breakfast stating that colonialism still occurs in ways that are not as obvious. Voting policies prohibit people who only have a P.O. Box from voting, which includes every Native American living on a reservation.

“There aren’t any houses or roads on the reservations so the only way to get mail is through P.O. boxes,” Serbin said.

Beltran also spoke about the “myth of the vanishing Indian” in which people are taught that Native American culture and tribes are dying out. However, Serbins claims that on most reservations, children are taught their native language first, and English is not taught until fifth grade.

“Our languages are not dying,” Serbin said. “We’re still out there.”

Larry Knudsen is the Host/Producer of “Indigenous in Music with Larry K” which is distributed by Native Voice One – The Native American Radio Network, Public Radio Exchange (PRX) and Pacifica Audio Port. His program hosts musical guests that are featured in “SAY Magazine” a international Indigenous magazine. He is also the President/CEO of Two Buffalo Construction Supplies and President at Sarasota Manatee Business Alliance. Sal Serbin is the Executive Director of the American Indian Movement of Florida (AIM) and hosts Indigenous Sounds on WSLR Mondays from 9-11 p.m.

Information for this article was gathered from www.history.com, www.npr.org, www.washingtonpost.com, rapidcityjournal.com,news.nationalgeographic.com and www.officeholidays.com.