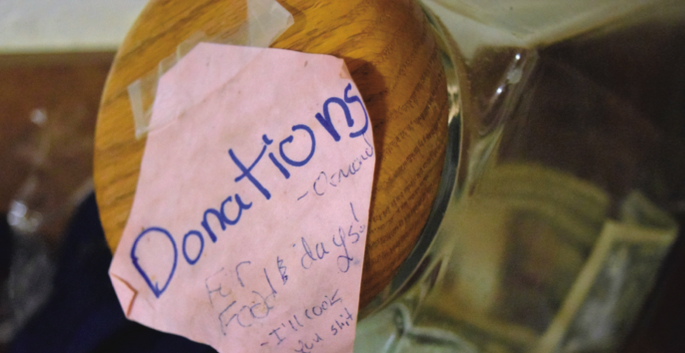 Multiple pans, pots, spatulas and spoons had disappeared from their cabinet drawer homes in Pei Third Court lounge. The discovery disappointed many Third Court residents, as the utensils were purchased with money from community donations. Although many of the items were recently returned, the principle behind the long and inconsistent absences evoked questions about community standards.

“I have no problem with people’s affinity for our kitchen because it was a space made to be used, but when people don’t respect property that we invested money into, and ruin the communal value of a shared kitchen by taking items for themselves, it off-sets the whole goal of a communal space,” first-year student Ormond Derrick said.

Third Court lounge is a vital hangout spot for first-year students and many aspire to keep it tidy and open to the community.

“I love Third Court kitchen! I am in there all the time. I love to cook for myself and others. I think community meals and sharing of food is a really important time to bond and get to know one another,” first-year student Amaranth Sander wrote in an e-mail interview.

In order to strengthen the community and its values, first-year students Mckenzie Cameron, Ormond Derrick and Amaranth Sander came together to organize funds for communal utensils. In addition to contributing much of their own money, the three put out a donation jar for additional resident contribution.

During the establishment of quiet hours and general community rules, “Don’t be that asshole” was a guideline agreed upon by Third Court residents during orientation week.

“I saw that Ormond made a post on the forum about [the theft] and I got really pissed off because he was telling me earlier in the school year how he and other people got some money together and bought these with their own money. So it’s just very frustrating,” thesis student and Senior Residential Advisor (RA) Hannah Coker said.

“It would be ideal if people respected these sorts of things, but when you have 900 people on a campus, you’re not going to have everyone who’s willing to follow the rules. It made me really angry, honestly.”

However, this is certainly not the first time that Pei lounges are center of campus scandal. In 2012, during a Palm Court Party (PCP) weekend, several acts of vandalism occurred in both Second and Third Court lounges. The most notable incident involved the discharging of three fire extinguishers, each of which costed the school nearly $100 to replace.

Third Court lounge also experienced multiple deteriorations in 2015. In addition to large paint chips, holes and drawings on the wall, the fridge was heavily damaged and the stove and oven were left unusable due to two small fires. Second Court lounge was also vandalized in 2015 by graffiti, acts of arson and punched holes in walls.

“For the most part we’ve been pretty good [this year]. I’m actually very happy with how most people have been interacting. When we find people who aren’t necessarily respecting the people around them in their community, usually after we talk to them about it we don’t run into any problems,” Coker said.

“You’ll always have a few issues, but I try to focus on the positive and I really think that the overwhelming majority is respectful of this.”

The Third Court theft that occurred last week differs from the past incidents of vandalism, as the stolen utensils were paid for by Third Court residents. The incidents that occurred in the past few years affected property directly owned by the school. As a result, all of the residents in the community had to pay a fee of $3.00:

“Typically when vandalism occurs housing will send out an announcement to the impacted community. If the person(s) responsible come forward we then ask them to make restitution. If this does not occur then we would normally charge the entire community a set fee,”  associate dean of Student Life Mark Stier said in an email.

Though this consequence does not apply to the current situation, it’s important to note that there is a monetary loss behind this thievery. Rather than directly affecting the college, the current deficiency affects Third Court residents, both in disappointing those who are hungry and financially manipulating those who donated.

“Please just return the items you took, and if you’re going to use our stuff in the future, use it in Third Court and then bring it back,” Derrick said.

Whether the taking of communal utensils was simply individual greed or legitimate misunderstanding, students have a responsibility to respect the community that they are a part of. By taking items from Third Court lounge and not returning them in a timely manner, individuals are ruining other individuals’ values of community spaces.