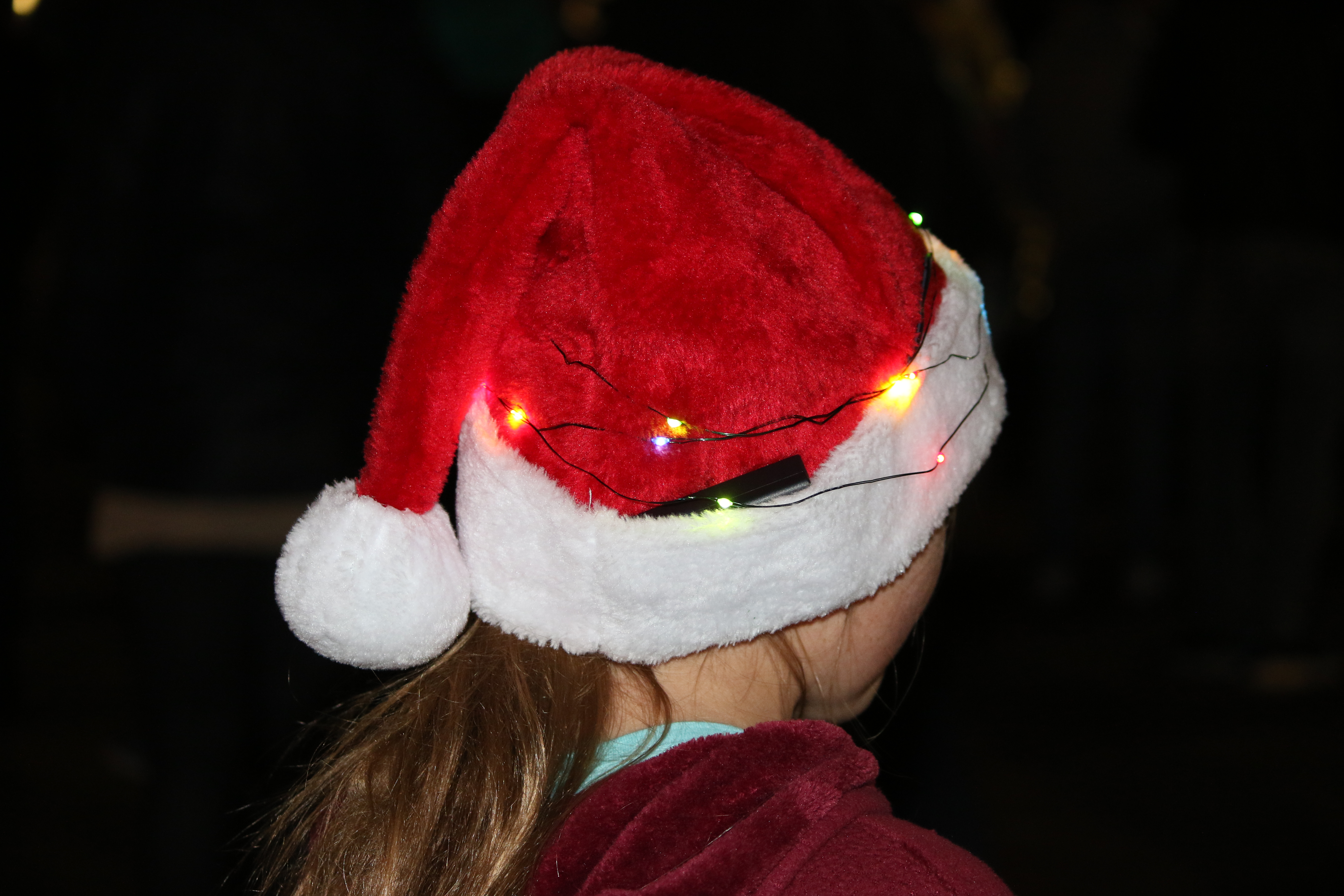 One of the patrons wore a Santa hat adorned with Christmas lights.

The holiday spirit drifted through the hearts and streets of downtown Sarasota as patrons awaited the lighting of the Christmas tree in Five Points Park on Thursday, Dec. 29. This year, the third annual lighting ceremony planned by the Sarasota Downtown Merchants Association was well-attended and merry. At least four dogs were seen wearing festive sweaters. Human guests listened to live music, munched on treats from food trucks and waited in anticipation for the activation of lights. Some visitors even wore lights on hats and necklaces to show their support.

Standing in the park for this holiday season, the 36-foot tree is adorned with an array of ornaments and around 5,000 lights, according to Ron Soto, the president of the Association. Soto bought the tree for around $20,000, then decided it should be shared and incorporated it into a community event.

Before this year’s ceremony, Soto went inside of the tree to fix lights that had reportedly been unplugged by houseless community members. While inside, he could look out and see people through the branches and ornaments.

Soto’s favorite part of an event like this one certainly isn’t setting it up. With Santa Claus, carolers and music to be sorted out, not to mention a large tree, it’s a lot of work—but Soto thinks it’s worth it to see all of the families show out for a good time.

“When that’s all said and done, seeing people come together and take photos of their loved ones in front of the tree is what makes the event truly special,” Soto said.

An event such as this one reminds people of the cyclical nature of existence, with experiential elements of both tradition and change.

“It’s important to remind us where we were in a previous year, but now here in a similar moment,” thesis student Corinne Leavengood shared. “It doesn’t matter what the tradition is; there’s something grounding about it.”

At a certain moment during the ceremony, the crowd’s tension built and was expressed through loud vocalizations and movements. Everyone collectively wished for the tree’s lights to finally be turned on.

“Something about it felt kind of absurd, but at the same time fun,” Leavengood reflected. “A community coming together to stand around a tree that’s been set up by some other humans with an expectation for this grand moment is kind of absurd, but there’s something powerful about a group of people deciding to give their full attention to a single thing at the same time. Sharing that focus and those intentions together almost feels like we’re the ones lighting the tree, even though it’s just one person plugging it into an outlet.”