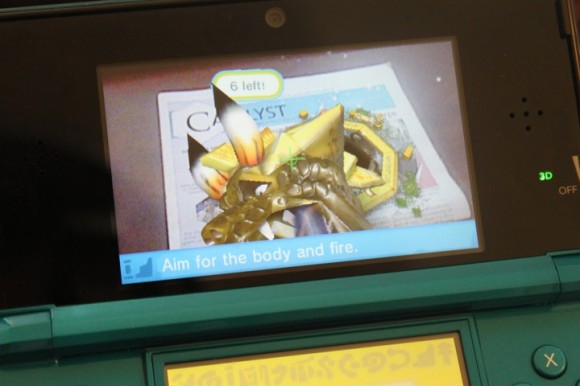 A dragon springs from an issue of the Catalyst with the help of an augmented reality game on the Nintendo 3DS.

Last year, filmmakers and TV manufacturers sought the holy grail that is 3D. Nintendo hopes to claim it in 2011 with the Nintendo 3DS, its new handled gaming system that boasts glasses-free 3D effects and graphical capabilities far beyond those of its predecessor. As the successor to Nintendo’s DS, which sold approximately 147 million units since it launched in 2004, the $249.99 3DS has high expectations to live up to in the eyes of Nintendo fans and shareholders. Your humble technology columnist bought a 3DS and its narrative evaluation is ready.

The 3D effect works. And most importantly to some, it works without additional eyewear. The device’s screen displays two images at different angles allowing each eye to see just one, creating an illusion of depth. In order to see the 3D effect, users must keep the system directly in front of them. While it’s not difficult to keep at an optimal viewing angle, the effect disappears when the system is moved slightly. A slider on the side of the device allows users to adjust the strength of the 3D effect and even turn it off completely.

The effect itself adds depth to the visuals in favor of having things pop out of the screen. The extra layer of depth makes games more immersive, but it’s not magnitudes better than 2D. However, 2D screens seem a little stale after getting used to the 3D effect.

The 3D effect has caused headaches or eye strain for some users. While I did get a headache as I stooped over to play a 3DS at a Best Buy kiosk, I’ve had no problems when playing it in the comfort of my own home. Although Nintendo recommends playing only in 30 minute intervals separated by 10 minute breaks, I was able to play for approximately two hours straight without problems.

Among gamers, Nintendo is known for quality. One classic Game Boy struck by a bomb during the Gulf War can still play Tetris despite being partially melted.

The 3DS’ design hasn’t changed wildly from its DS predecessors, resembling a half-step between the original DS and the DS Lite. The top screen is now slightly wider and displays 3D effects while the bottom screen remained the same size and restricted to 2D graphics.

The new addition to the control scheme is the slider pad, the first of its kind on a Nintendo handheld. The slider pad works as an analog stick one would find on a home console control. While the addition of a second slider pad would have been welcome, having one is an improvement.

The system also features three cameras. One camera faces the player for picture taking and use in some games while two cameras face away from players on the top outer half. The two cameras cameras can take 3D pictures and soon 3D videos after a software update is made available in May.

While 3D pictures are nifty, the quality of the cameras makes their usefulness suffer. With only 0.3 megapixels each, they’re nowhere near the quality of a 10 year old digital camera.

The 3DS also has a built-in pedometer that counts how many steps users take. Nintendo awards users with coins for a certain number of steps, which can be used within certain games to unlock special content.

Nintendo has made great strides in the 3DS’ home menu system. Applications that let users create avatars, manage a friend list, take notes, record and edit audio, take pictures and track game play time are all presented in a scrollable list of icons. It’s clean and easy to navigate-not to mention that the 3D effect makes them slightly more pleasant to navigate.

Nintendo’s past draconian online policies required users to register random strings of numbers with others or each game in order to interact online. Other than online versus modes, Nintendo didn’t have much else in the way of online features in its games either. With the 3DS, Nintendo introduced a new friend list system which only requires exchange of codes once. Users can see if friends are online and what games they’re playing. Nintendo claims it will update the system in May to include a messaging system and enhance other online features in the future.

Nintendo will update the handheld’s software in May to include a web browser and a store for downloadable games. Through Nintendo’s E-Store, users can download classic Game Boy and Game Boy Color titles in addition to new games designed specifically for the 3DS.

Nintendo has improved local connectivity as well. With Street Pass, users can exchange avatars and other game specific information when they pass others who have their 3DSes in sleep mode as well.

The most compelling feature of the 3DS besides the 3D effect are a few built-in “augmented reality” games. Augmented Reality (AR) games use the system’s cameras to “augment” reality by layering graphics onto the video received through the cameras.

One set of AR games included with the system are activated by cards with Nintendo characters and symbols on them. These “AR Cards” are placed on a flat surface and 3D images pop out of them when viewed on the 3DS’ screen. In one game, a miniature environment with targets hidden around it springs out of a card. Players can move around the card, changing their view of the environment and interacting with the digital environment by shooting darts at targets. In total, there are 12 games or applications within the AR Cards included with each 3DS that can provide a few hours of play time.

Another augmented reality game Nintendo provides with the system is Face Raiders. Players take pictures of themselves and others that become plastered onto in-game enemies. Players can physically move around to shoot enemies. While not very deep, the interactivity and personalization of these games make them addictive.

The initial lineup of games is largely unimpressive, despite 18 of them being available. The ones that stand out the most are Street Fighter IV 3D Edition, Pilot Wings Resort, Steel Diver and Nintendogs + Cats. Although far from a stellar line-up, Nintendo promises to bring some great titles in the coming months. Slated for the coming months just from Nintendo are Kid Icarus, Mario Kart, Animal Crossing, Star Fox 64 3D, Paper Mario and an as-of-yet untitled Mario game. Other game developers are set to release Resident Evil: Revelations, Metal Gear Solid Snake Eater 3D, Kingdom Hearts, Professor Layton and the Mask of Miracles, three Shin Megami Tensei games, a  Final Fantasy game, and a Dragon Quest game within the near future. Nintendo announced last June that more than 70 games including these were already in development. Nintendo and other game developers will undoubtedly announce more games for the system this June at the Electronic Entertainment Expo (E3).

The firmware update in May will also add Netflix streaming to the 3DS’ already long feature list. Users who also have Netflix accounts will be able to stream their movies and watch them on the 3DS in 2D. Nintendo also plans on releasing trailers for upcoming games and is in talks with film studios to periodically release 3D videos.

Overall, the 3DS screams potential. It isn’t mind-blowing, but it’s nice. The gyroscope and cameras have a lot of potential with Augmented Reality games and there are many great games coming down the pipeline. The Catalyst’s magic 8-ball says outlook very good–and the 3DS earns a Satisfactory evaluation.

Visit 3Dporch.com to see 3D photos taken with the Nintendo 3DS and other devices.