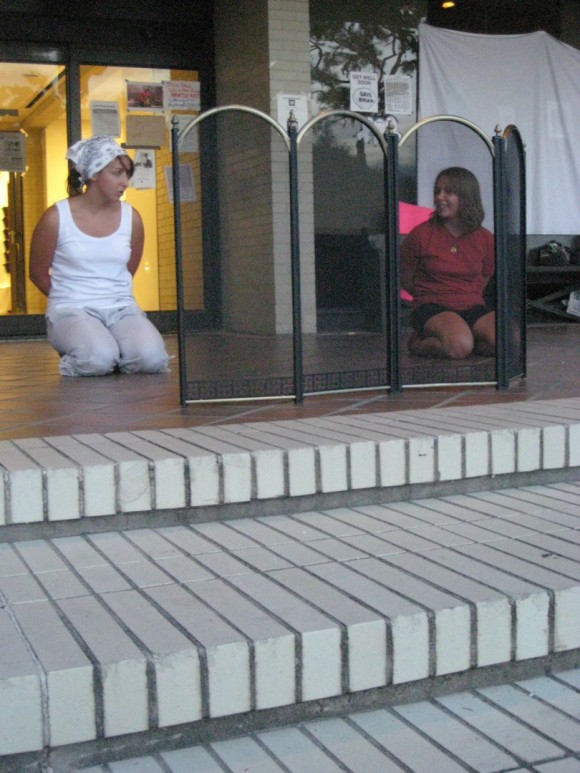 Comiskey and Rosen act out the parts of two incarcerated migrant farm workers after their arrest for lacking valid documentation.

The sun set in a wash of yellows and blues as a group representing the New College branch of Students Working for Equal Rights (SWER) invited a crowd students to put themselves in the shoes of an undocumented immigrant. In a series of three short sketches, they re-enacted a violent raid on an orange grove; the plight of two immigrants in jail, aware of neither the charges against them nor their basic rights; and a small migrant family’s fear as police beat down the door of their home. Between each scene, the terrorized immigrants and the aggressive authorities changed back into the audience’s fellow students and proceeded to prompt a response from the onlookers. “Is this right?” they demanded. “Are you comfortable with this?”

“What do you think should be done differently?”

This is the Theatre of the Oppressed.

Developed by Brazilian theater practitioner Augusto Boal in the 1960s, the Theatre of the Oppressed turns the tables on a traditionally passive audience and encourages them to alter staged scenes by taking on the roles of actors. Although it appears in a variety of forms, its major project is to educate audiences about global injustices, foster a sense of empowerment in oppressed groups and ultimately effect social change. It is activist theater. 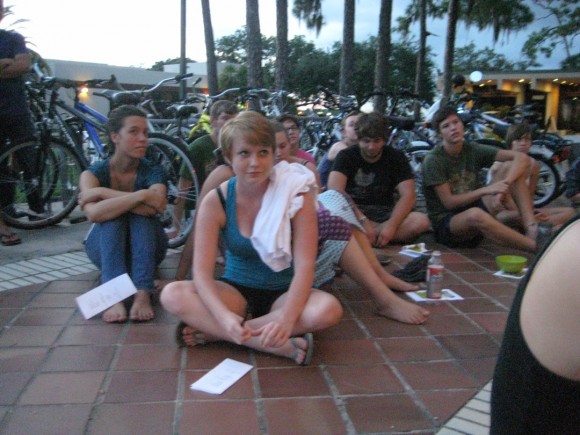 Clare Letmon, a second-year, listens as the SWER team responds to one of her questions.

SWER addressed a wide range of grievances against the federal government’s immigration policy and its treatment of migrant workers and their families. Their main bone to pick lay with Section 287(g) of the Immigration and Nationality Act, passed in 1995. Under 287(g), the federal government can authorize local law enforcement officials to act as Immigrant and Customs Enforcement officers, capable of requesting paperwork from suspected offenders. These police agents are free to arrest and even deport those who cannot provide proof of citizenship.

Those opposed to 287(g) argue that threatens more than it ensures the safety of people in living in the U.S., regardless of their citizenship. They cite studies that show in some communities, people of immigrant status are likely to let a crime they witness –– or worse, a crime of which they are a victim, go unreported. They fear the threat of deportation and the loss of their way of making a living, and thus keep their silence. SWER also criticizes 287(g) on the grounds that it encourages racial profiling among police officers “as a means to make arrests.” 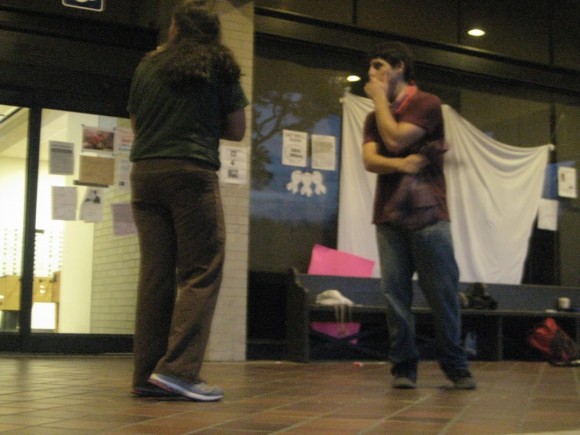 Third-year Ben Goodman and first-year Farrell Ocasio simulate the panic of an immigrant family as Immigrations and Customs Enforcement officers force entry into their home.

SWER’s demonstration of the Theatre of the Oppressed naturally sparked dialogue among audience members. Individuals in the crowd raised their hands and asked how they could personally take a stand in defense of suffering immigrants. The SWER team was ready to answer with telephone numbers to the offices of elected officials, volunteer opportunities and links to key informational websites.

After the performance finished, the crowd flocked to a nearby table where a free hot meal waited for them. But as they filled their plates and their bellies, the conversations continued –– some quietly fervent, others outraged. The power of the Theatre of the Oppressed motivated its audience to not just think, but to take the next steps toward changing things for the better: to talk, to plan, and as SWER hopes, to act.