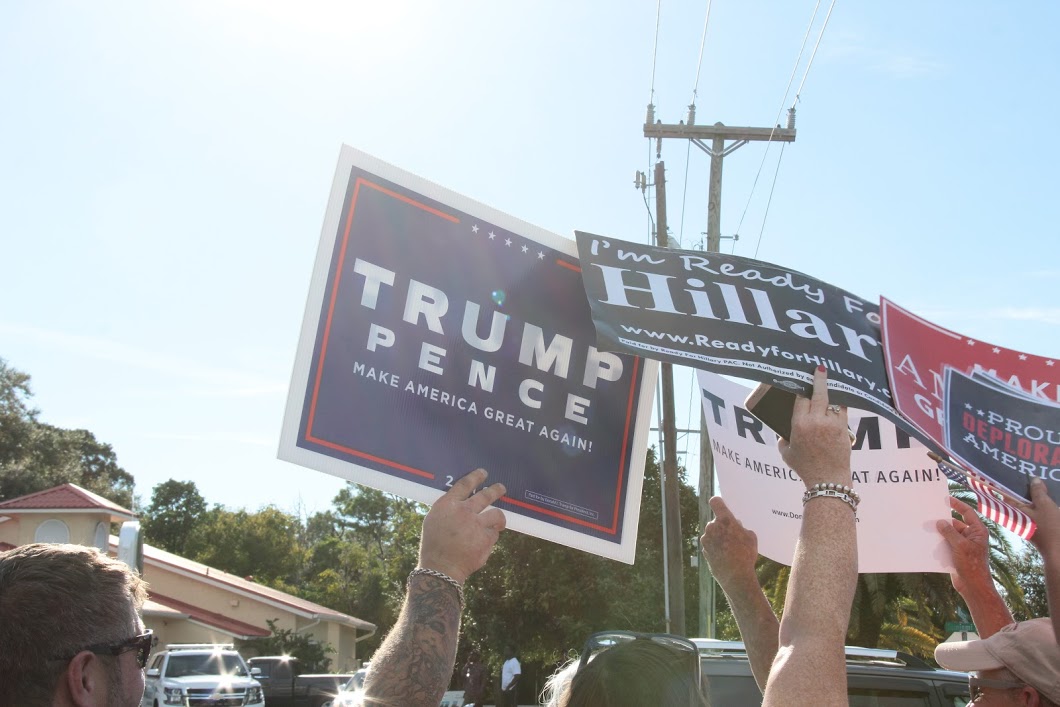 The most common question of the election season is of course who to vote for. However, with election day rapidly approaching, it is important for people to not only know who they are voting for, but how to vote, what to do if someone is trying to stop you from voting, where to vote and why the 2016 election is going to be a landmark election.

Donald Trump and Mike Pence – Donald Trump is the republican nominee for president with a platform based mostly on conservative republican policies and anti-immigration rhetoric.

Jill Stein and Ajamu Baraka – Jill Stein is a third party candidate for president running on the green party ticket with very liberal policies and plans to create a green version of the New Deal.

Gary Johnson and Bill Weld  – Gary Johnson is a previous governor of New Mexico running for president on the Libertarian party ticket. His policies largely favor states’ rights and would limit the rights of the federal government if put in place.

Marco Rubio has been highly publicized this year after his failed attempt to run for president and losing in his home state of Florida. Rubio is a conservative republican who believes like most conservatives that abortion is wrong and opposes gay marriage. He does not support the legalization of marijuana for recreational purposes.

Patrick Murphy is a democrat who is much less known. He believes that we should uphold Roe V. Wade and has voted yes on many measures in the past to support clean energy production in Florida. He also voted yes to extend unemployment rates and did not want to raise the retirement age. However, he is in favor of concealed carry and believes that people have a right to carry.

Also on the ballot are three Florida Supreme Court Justices who decided to stand for merit retention this year.

Charles T. Canady is a Justice of the Florida Supreme Court who chose to stand for retention this election. He is an extremely conservative justice and previous member of the Florida House of Representatives. Where he worked on a bill which would eventually coin the term “Partial Birth Abortion”. This year he was listed on a list of judges that Donald Trump would potentially elect to the supreme court if elected as president.

Jorge Labarga is a Justice on the Florida Supreme Court Chief Justice who chose to stand for retention this election.  He is notably the first Cuban-American to hold this position. He stands on the side of judicial review as being independent of party affiliation and opinion of the ruling justices. His major projects as a justice have been working to help the poor have access to lawyers and raising wages for court employees.

Vern Buchanan is a republican candidate running for Florida State Congress this year running for re-election in the 16th congressional district. He is among one of the richest members of Congress and is known for being pro-business and very conservative in his legislation.

Jan Schneider is the democratic candidate running for Florida State congress representative in District 16. She is in favor of liberal policies including raising the minimum wage, LGBT+ rights and women’s rights.

Greg Steube is a republican running for Florida State Senate in the 23 district. He is a conservative politician who has held multiple positions on the Florida house of Representatives. He was previously running for the Florida house of Representatives when he changed his campaign to a state Senate campaign on Feb. 11, according to the Tampa Bay Times.

Frank Alcock is a democrat running for Florida State Senate, and a Political Science Professor at New College of Florida (NCF). He believes that the district does not want another moderate or conservative republican holding this seat. He promotes the creation of alternative energy sources and expanding Medicaid.

On Nov. 8 we are not just voting for the president but also other issues. In 2016 there are 162 other statewide measures on ballots throughout the United States, which include notable issues such as marijuana legalization, minimum wage, gun control, the sale of tobacco and taxes.

In Sarasota, the four issues on the ballot are Solar Energy, Medical Marijuana, Tax Exemption for disabled first responders and Property Tax exemptions for senior citizens.

You can Vote Early at the following locations until Nov. 6.

Or, if you are registered to vote with NCF as your location you can vote on Nov. 8 at Light of the World Int Church at 3809 Chapel Drive in Sarasota.

Not only should you vote on Election Day on Nov. 8  – not Nov. 28 as Trump would have some Floridians believe – or in this election by mail or absentee ballot, but you should vote in every election for the rest of your adult life because the presidential election isn’t the only one that matters in creating change.

Since the average age of retirement for Supreme Court Justices is just under 79 this puts three justices at or around the age of retirement which makes it likely that the new president will have to appoint justices to replace them should they choose to retire.

You are guaranteed the right to an indiscriminatory voting experience by the Voting Rights Act of 1965. If you believe you are being targeted by a “poll watcher” – especially if you believe they are acting discriminatorily towards you – you should explain to that person that what they are doing is illegal. If a “poll watcher” attempts to keep you from voting this should be reported to FBI field office or their Public Integrity Section.

Information for this article was taken from ontheissues.org, ballotpedia.org, and Iwillvote.org