Since Stier's departure from New College, Housing and Residence Life has been taken up by administrators such as Nicole Gelfert and S. Marjorie Thomas. 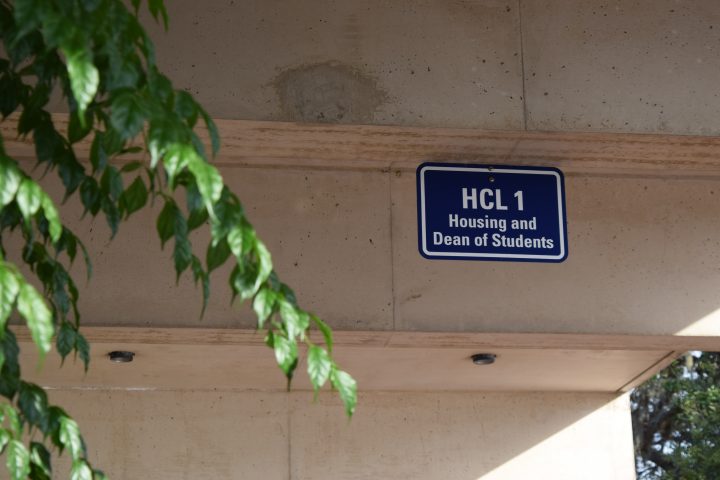 While many students may be looking forward to the end of the semester, others must secure lease agreements–and ultimately, their housing situation–before the spring semester begins. Around half of the students who apply to live off-campus are put on a wait list, resulting in a ‘waiting game’ as the number of students returning to campus solidifies.

For the 2016-2017 school year, 23 percent of degree-seeking undergraduate students lived off-campus while 77 percent lived on-campus. An overwhelming majority of off-campus students were upper-years, as only 4 percent of first-year students reportedly lived off campus.

According to Senior Associate Dean of Student Affairs Mark Stier, 18 students have requested to live off-campus for the spring semester.

The number of students permitted to live off campus for the spring semester starts at 10. This number grows depending on how many students return to campus.

“We have a list of students who are studying abroad, transfer students and first-year students, but we never have an exact number who come in,” Stier said. “It changes every year.”

Students can also be Academically Dismissed if they receive two unsatisfactory contracts, which need not be consecutive.

“I have to wait until contracts have been announced, who has sat and who has unsat them,” Stier continued. “We’ll have a handful of students who unsat their contracts and all of a sudden there are more spaces [on campus to fill] so I can’t let anyone else off.”

Another factor is the overall cost that the school must pay on residential buildings, which is covered by the room and board fee students pay to live on-campus.

“Our residence hall capacity is roughly 629, for example; that’s 100 percent capacity,” Stier said, “But what we actually have on campus is more like 665, and so that difference enables us to pay for the bonds of the residence halls.”

“It’s not an exact science, but it’s close since we have students who will not show up, who will have had a medical emergency or take an emergency leave of absence, so there’s a little bit of a cushion so that I can still maintain roughly the 108 percent.”

These numbers solidify around January. When they do, Stier is able to notify students on the waitlist whether or not they have been approved.

Off-campus housing applications were due Dec. 1. A committee comprised of New College Student Alliance (NCSA) and Housing Staff representatives will review all of the applications and prioritize them.

“The committee members don’t know who each other are,” Stier explained. “That way they’re not pressured by students calling them up or emailing them or stopping them and saying ‘Hey, I know you’re on the committee, my case is this, this and this.’ So it’s totally a blind process.”

This process, in which the committee determines priority, was established three years ago when the Housing and Residential Life staff reached out to the NCSA.

The names of each student are removed before sending them to the committee to ensure that each application is reviewed purely based on the student’s circumstances.

“There’s no names, no identifiers; they’ll go in and they’ll rank them one through however many are on that list,” Stier said.

The ranking system is based on seniority, determined by the number of contracts completed as of Dec. 1, personal conditions and special circumstances, which students are able to explain in their application.

“I have nothing to do with it at all,” Stier said. “[The committee] sends it back to me, I combine them all, and then I go back and put the names on them and see who’s one, two, three through ten. And those top ten people will be released.”

The rest of the students will go on a waitlist and, as spaces open up, they will be approved based on where they fall on the list.

“And they absolutely will open up, not for everybody, but there will be more than 10 people that get off campus,” Stier said.

Students who require Americans with Disabilities Act (ADA) accommodations will automatically be approved for off-campus housing if authorized by Director of Student Disability Services Meighen Hopton.

“Applying for off campus was kind of a mess,” third-year and off-campus student Angela Duda wrote in an email interview. “Because I had not officially sat my contract until the middle of January last year, and the cutoff date for contracts considered is Jan. 1st, they considered me to have only two contracts completed–which basically labeled me as a first-year.”

As a result, Duda was given a short window of time to find a house.

“Despite being told I was not on the waitlist, I was given a slot to live off-campus the very last day they were considering waitlisted people,” Duda wrote. “That gave me about a month to find a place to live. That was really hectic and scary and awful. Luckily, a spot unexpectedly opened up in one of my friend’s houses and I was able to move in.”

According to some students, the process fosters insincerity, motivated by the fear of being denied.

“On-campus housing is so deplorable and infuriating that people are forced to lie on their off-campus applications for fear that their application will be denied,” thesis and on-campus student Malcolm Wells wrote in an email interview. “All of my friends, excluding one, lied significantly on their applications in order to receive off-campus housing. These lies ranged from false pregnancies with local girlfriends to thoughts of suicide induced by the social culture of our school.”

For others, the process was not as daunting.

“It was fairly easy for me because I have parents that live in the area,” Thesis and off-campus student Kira Thoenes wrote in an email interview. “I always thought housing liked that because even if an off-campus place fell through, I could still move in with my parents.

“I also always had an address to give them […] and I think that looked nice to them, or they thought I was living with my parents. I wasn’t going to question them about that, though.”

The cost of living in “apart style living” Residential Halls, Dort and Goldstein, is $4,883.70 per semester. The amount of time from the start of Fall semester to the end of ISP is roughly 5 months. This equates to approximately $976.74 per month.

“The money I’ve saved living off campus is literally life changing for me,” Duda wrote. “My entire month’s budget is around $750 dollars–and it would be lower if I hadn’t just bought a car.”

This sentiment is shared among other students who live off-campus.

“Since moving off-campus, I have never wanted to pay more than $500/month because that is about what I earn a month at my job, so if anything ever happened with school I would still be able to pay rent and so far I have been able to stick to that,” Thoenes wrote.

Though monthly rent may cost less, Stier warns about the additional costs that one must take on when living off-campus such as groceries–due to reduced commuter meal plan off-campus students receive–monthly utilities fees separate from rent and gas to travel to campus.

However, there are ways to combat these additional costs.

“I think you can definitely save a lot by living off-campus, but there are some things you can do to make it even more worth it,” Thoenes wrote. “Keeping your electric bill down by turning off lights, paying attention to what is on your internet bill (I once found out we were paying $10 a month for HBO even though none of us used that), and not taking super long showers are small ways you can impact your spending.”

“If you have questions, you’re more than welcome to come in. If you want a room change, I’ll pull up all the rooms for you and show you whatever you want to see […] I want to make sure that that’s very transparent,” Stier said. “I really do try to be helpful with it, it’s just people want answers now and unfortunately I have to follow the process.”

Information for this article was obtained from the 2016-2017 New College Fact Book and ncf.edu