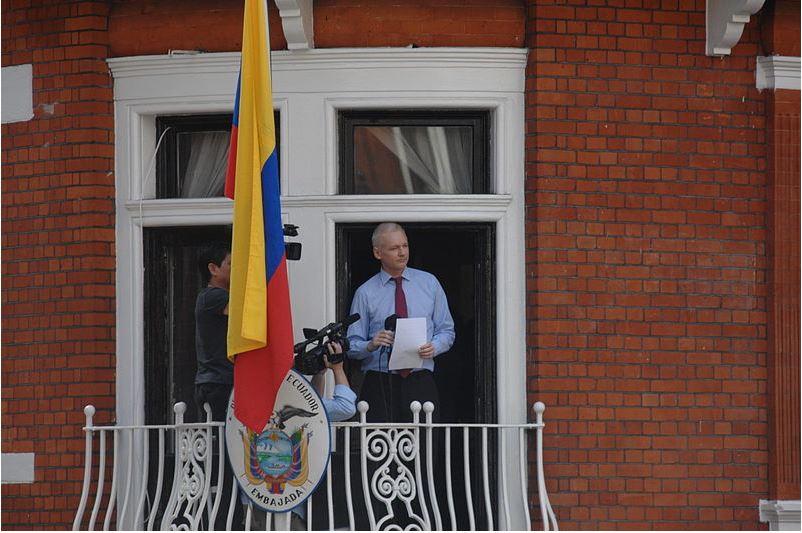 After almost seven years in a dimly lit 330-square-foot room in the Ecuadorian Embassy in London, Wikileaks founder and editor Julian Assange was arrested by United Kingdom (UK) police on Apr. 11 and taken to Belmarsh prison, known as “Britain’s Guantanamo Bay.” It took about seven police officers to carry Assange out of the embassy, while he yelled that “the UK must resist [his extradition]” and “this is unlawful, I am not leaving.” The arrest proved to defenders of Wikileaks that worries of secret indictments from U.S. courts were well founded even as far back as 2010. The indictment of Assange was accidentally released in November of 2018 by State of Virginia courts, according to The New York Times.

The editor’s departure from the embassy ended his months of isolation, mistreatment and malicious spying by Ecuadorian and other governments. A healthcare professional and an expert on the physical and psychological impact of torture, Dr. Sondra Crosby of Boston University, sent an affidavit to the United Nations (UN) and the Council of Europe only three days prior to the revoked asylum and arrest to acknowledge the harm done to Assange, according to the Intercept. What is more, the now unsealed indictment by Grand Jury in a Virgina Federal court attempts to charge Assange for what U.S. Army Intelligence Analyst Chelsea Manning was court martialed and served time for under the Espionage Act in 2013. At the time, the Department of Justice (DOJ) during the Obama Administration was, despite several attempts to do so, unable to find a way to indict Assange or Wikileaks for publishing the same information that large traditional news outlets like the Guardian or the Times did. The leaks were famous for informing the public about how U.S. military and allies chaotically killed foreign civilians in their battle operations in the Middle East.

“In Assange’s case, his release of information was indiscriminate and reckless,” Professor of Political Science Keith Fitzgerald said. “That is where I have a problem. If Assange is a real whistle blower and sentinel of justice, then there should be judiciousness and thought committed to what is released. He did not [initially] put these [leaks] out for the press to see, where they can do redaction. He put full-fledged and complete information on the internet for everybody to see. That is obviously a different thing.”

Fitzgerald suggested that information collection before the proliferation of digital media forced the journalist’s process to be more arduous and thus prone to avoid reckless or extraneous expressions of whistle blowing.

“I will say that the release of some of that information dramatically improved U.S. foreign policy,” Fitzgerald said. “We were doing things that we knew were wrong and also happened to be stupid. Exposing that made officials to be responsible for their conduct and allowed people to have a say in their government’s actions.”

Fitzgerald said that while hard truths about our government’s actions are needed for a healthy democracy, individuals’ information needs to protected and excessive breaches of military or State Department data need to be minimized.

On Jan. 18, 2017, the late Sen. John McCain told Fox News that the “Taliban ‘murdered’ people because of Chelsea Manning and WikiLeaks,” however PolitiFact was unable to prove this in their report. Other media outlets have interviewed military and State officials, who say that large data leaks are generally harmful to national security, but no specific instances of Americans and allies being put in more danger than they already were have been identified—potentially in an attempt to continue protecting sensitive, private or classified information.

“In sum, today’s indictment contains no new evidence or facts about Assange’s actions; all of it has been known for years,” editor and co-founder of the Intercept Glenn Greenwald wrote.

However, the U.S. legal system has now reversed its judgements of Wikileaks’ actions, made in 2013, by making the same (or similar) charge Manning received, against Assange. This change in judgement by the Department of Defense is happening at a time when President Trump and the Ecuadorian state have also changed their support for Wikileaks.

During her 2013 court martial in Fort Meade, Maryland, Chelsea Manning explicitly acknowledged that she approached the Times, the Washington Post and Politico with sensitive military and diplomatic information. They refused to publish the information, which pushed Manning to Wikileaks who would, according to the Guardian.

Since then, Manning was released from her 35 year conviction in 2017 due to President Obama’s commuting of her sentence. However, she was jailed for failing to comply with the Federal District Court in the Eastern District of Virginia’s demand for her testimony against Wikileaks on Mar. 8, 2018 and remains in jail. Though the courts have granted her immunity, Manning is refusing to testify for the sake of Wikileaks’ legal status.

Ecuador’s new presidential administration under Lenin Moreno revoked Assange’s asylum claiming that he violated the terms of his asylum after leaks about Moreno’s corruption allegations and family photos were released to the public. Moreno claims Assange was behind the leaks.

Once his asylum was lifted, the UK police were quickly able to make an arrest on Assange for skipping bail terms in 2012, when he began his long stay in the Embassy.

Assange took asylum from Ecuador under the previous administration headed by President Rafael Correa when he was not given assurance from Sweden that they would not extradite him to the U.S.—a point of fact Assange’s lawyer Jennifer Robinson made clear in a Sky News interview on Apr. 14, 2019.

In 2012, Sweden was pursuing legal action against Assange for charges of sexual assault—charges Assange has consistently denied—which were dropped in 2015 after the statute of limitations expired, according to the Guardian. Sweden’s preliminary investigation into the sexual assault allegations against Assange finished in 2017, unable to go forward without having direct communication with him.

Robinson has said that while they would appreciate having Assange face his sexual assault allegations, it’s the lack of acknowledgment from Sweden that it would not extradite the Wikileaks founder to the U.S. that is delaying the appeal to Swedish justice.

Two days after Assange’s departure from the Embassy, more than 70 British MPs in Parliament have supported action that would send Assange to Sweden “so the formal investigation into an allegation of rape can be concluded and, if appropriate, a charge can be made and any trial can take place,” according to the Irish Times. Some journalists have expressed concerns over press freedom.

On the day of Assange’s arrest by UK police and removal from Ecuadorian asylum, independent UN experts warned that arresting and expelling the Wikileaks founder from the embassy where he was granted asylum could put him at risk of experiencing human rights abuses.

Greenwald has condemned the indictment against Assange as an attack against press freedom. News outlets have been attributing Assange’s indictment with “conspire to hack,” when the recently unsealed indictment says Manning received resources from Wikileaks to obtain data and maintain anonymity—a best practice in journalism, according to Greenwald.

“The indictment seeks to criminalize what journalists are not only permitted but ethically required to do: take steps to help their sources maintain their anonymity,” Greenwald wrote for the Intercept.

Long-time political dissident and linguist Noam Chomsky referred to Assange’s arrest and indictment as a “scandalous” act of the United States extraterritorial reach.

Assange remains in Belmarsh high security prison and could remain there for six to 12 months for skipping UK bail. Prosecutors from Virginia and Sweden alike have now begun their separate initiatives to bring Assange to their respective country’s soil for justice.

Information for this article was gathered from theirishtimes.com, skynews.com, reuters.com, nytimes.com, theguardian.com, news.un.org and theintercept.com.