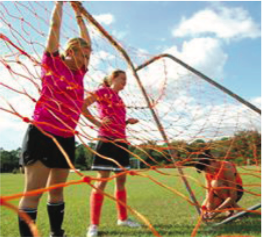 Since the all women and queer soccer team, the “Uglyz”, dissolved in 2013 due to a lack of interest from the student body, court soccer has been one of the only outlets for Novo Collegians to exercise their love of soccer. However, the behavior in court soccer has proven problematic for many. Fortunately for the soccer-loving women and queer students of NCF, Catherine Wooster is bringing the team back to life.

Up until the end of the 2013 school year, the Uglyz was the all women and queer soccer team of the school, playing against the Sarasota County Soccer Team of Women every Sunday. Wearing bright pink shirts to every game and making an occasion of eating a batch of brownies once a year before a game, the team was not the most winningest of teams, but that was not a problem for most players, most of whom just wanted to enjoy the friendly competition.

“We would try and practice during the week, but half the time we couldn’t get people to come to practice,” Salome Grasland, Class of 2013 and the last official captain of the Uglyz, said. “Our main thing was that every Sunday we went to play against the Sarasota County Soccer Team of Women, who were mostly middle-aged women that would kick our ass every single time. So that was fun.”

The Uglyz represented the inclusive and fun-loving nature of New College students, but by Grasland’s last year at the school – the last two of which she was the captain of the Uglyz – the team was struggling to stay afloat amidst the student body’s lack of interest in athletics.

“I was always trying really hard to recruit people and advertise for the team,” Grasland said about the team. “But I could hardly get enough people to fill a team every Sunday. The football team kind of had the same problem that year – I remember one time they were trying to convince us to trade players just so that they could have enough players for a game.”

While the team struggled to gather enough players to complete the team in 2013, it truly dissolved after the school year ended and the new one began without a designated captain. Grasland had designated a captain to lead the team going into the next year, but the newly assigned captain had to take medical leave from the school the year they were supposed to take charge. With no designated captain, and without anyone willing to step up into the role, the team dissolved and court soccer became one of the only outlets for soccer lovers to compete in.

Now, three years since the Uglyz last competed, Catherine Wooster has organized the team together again. Even though the players’ interest in practices is still lacking, the weekly games will be played again, albeit on a smaller scale than usual.

“Getting people to go out and play sports in hard, but I think we have enough people interested this semester,” third-year Wooster had to say. “We’ll be playing games in Lakewood Ranch, but it’ll be I think 6-on-6 games so not a full team. We’ll be playing against 45 Sarasota housewives who have nothing to do but go to the gym.”

New College has never been an athletic school, and the athletic clubs of the school are subject to the waxing and waning interest of the small student body no matter how important the teams might be to some people. Regardless, many think that it is important to have such an inclusive team.

“I think that we really need – if New College is going to do sports – that it is important to have a women and queer person team,” Grasland said. “I hope that if they do start the team again, they should advertise to non-binary people too. We love non-binary people on the team, so I would hate for those people to feel out-casted from the team.”

After three years the team will be returning again, and hopefully the interest of the student body can sustain the women and queer inclusive soccer team of NCF.