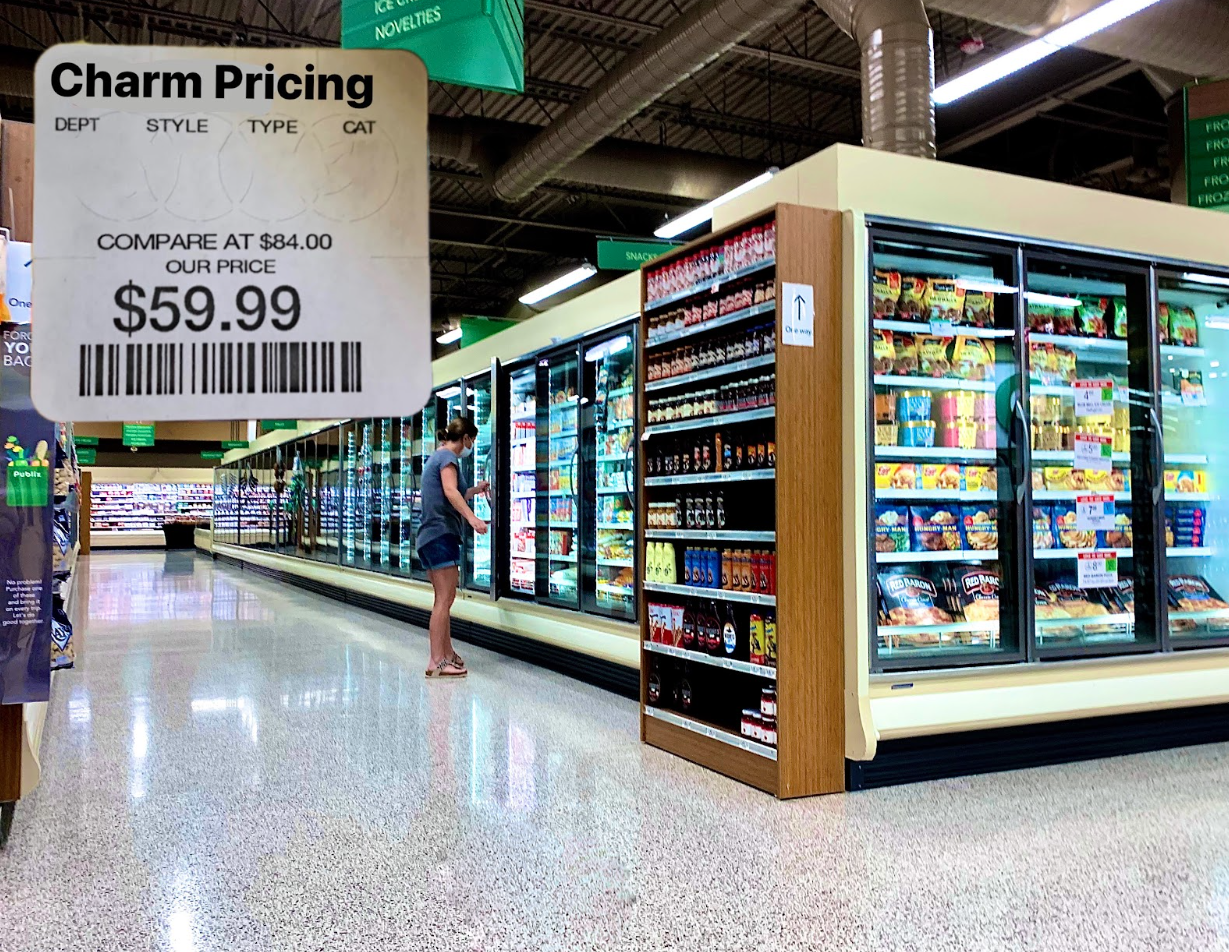 Graphic depicting "charm pricing" in effect at a local Publix. (Made by Chloe Rusek.)

Why is it when going into a grocery store, or even shopping through your favorite e-tailer, everything is priced $19.99, $49.99 or $99.99 rather than just rounding up to the next whole number? This isn’t just a coincidence, or subliminal government messaging, but actually has a psychological impact on shoppers that most people pay no mind to. This can’t actually be fooling shoppers into thinking they are getting a deal, or can it?

This pricing phenomenon can be traced back as early as 1875 and has a few names, with the most common being the “Left Digit Effect” or “Charm Pricing.” “Charm prices” that end in .99 or .95 are a standard in stores today, but their exact origin is a bit foggy. Some accounts of their origin point toward feuding newspapers trying to outprice the competition. Others say the prices came about so that clerks would have to record a sale and open the register in order to make change instead of just pocketing the cash.

A Psychology Today article talks about one axiom of the psychology of decision making that  explains that humans tend to be bad at thinking in absolute terms. This includes, but is not limited to, measurements such as dollars, distance or dimensions. Instead, humans prefer to think in terms of comparisons on an analog scale. Thus, $5.00 is seen as less than $6.00, naturally.

In addition to this, a large part of this pricing tactic relies on the fact that humans read from left to right. This means that everything is based on that initial left number. An article on these pricing tactics from Redysetlife explains this further:

“This works because of anchoring. Our eyes register that left number, and our brain anchors the rest of the numbers to THAT one instead of ‘converting it’ to the number that it’s really closest to.“

So, if you are purchasing something at $9.99 it turns into $9 rather than your brain realizing that it is actually just one cent away from $10. In fact, this is done with other price endings such as 95 and 97. With all these prices the theory works the same. Another interesting phenomenon that goes hand and hand with this form of pricing is the “magic number 9.”

Although the “magic number 9” effect has not been scientifically explained, there have been many studies done surrounding the concept. In one experiment, researchers took a women’s dress and studied the differences in the purchasing data while the dress was priced at $34, $39 and $44. The dress actually sold better at $39 even though it was a higher price than the $34. The trend of shoppers trusting a deal ending in 9 also factors into why the “left digit effect” is so successful.

What it all boils down to is the way the human mind works. Although people may not be aware of it, everyday businesses are constantly utilizing psychological tactics that help influence decision making. Being more aware of how these play a role in daily life can help the average consumer be more conscious of their decisions as well as understanding the impacts of the world around them.