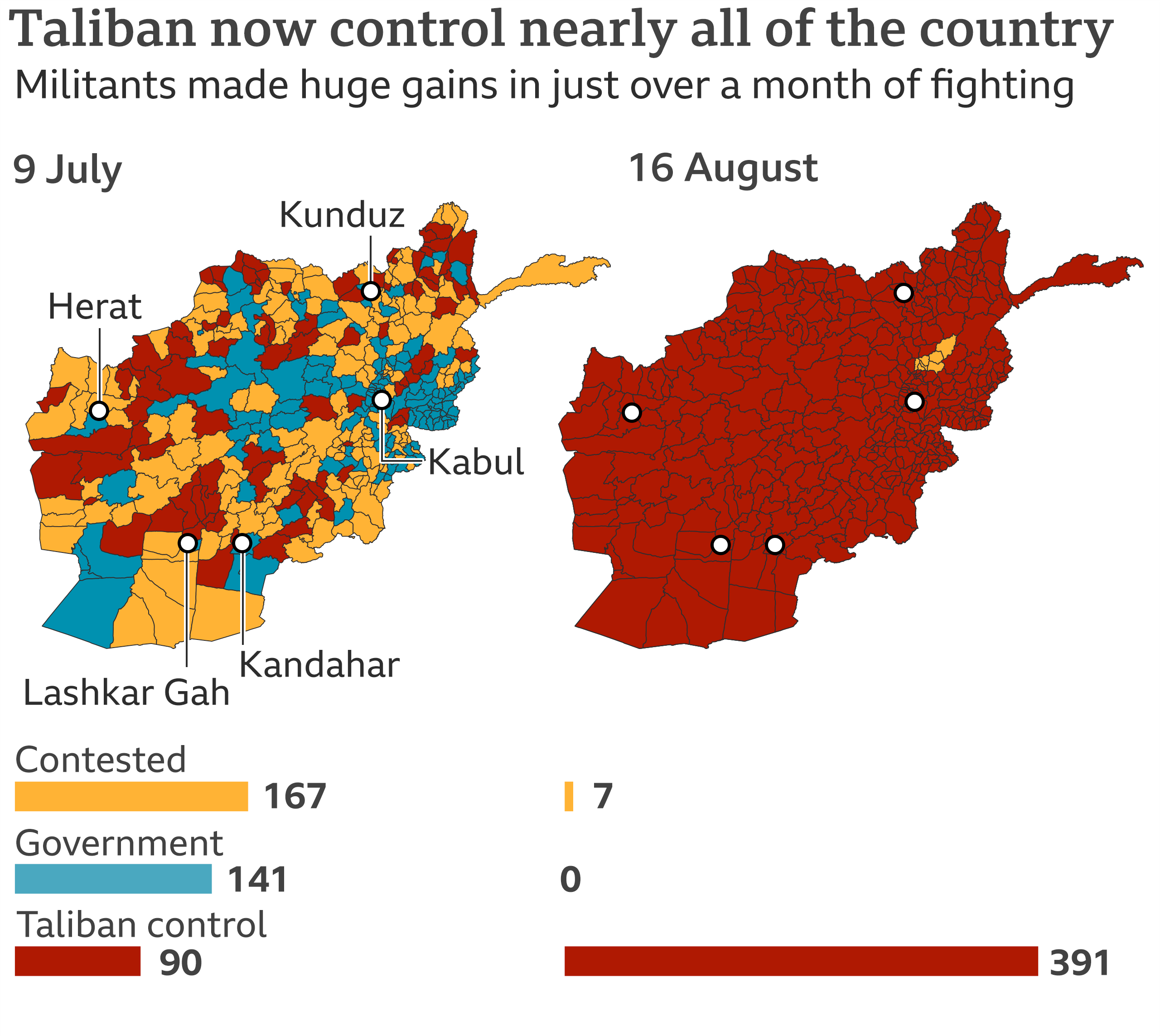 A map demonstrating how the Taliban has gained near complete control of Afghanistan since Aug. 16. Photo courtesy of BBC.

On Sunday, Aug. 15, 2021, the Taliban had successfully taken control of the presidential palace, thus finalizing their takeover of Afghanistan. The Taliban’s expedient takeover took place over a matter of days—as U.S. forces pulled out of the region and Afghani security forces trained and equipped by American personnel quickly dissolved, they put up little to no fight in some cities as Taliban forces swept over the nation. The takeover is the source of much debate in the U.S., with both sides of the political spectrum eagerly assigning blame for the takeover and speculating as to the implications this will have on Afghanistan and the rest of the world as a whole. Understanding how this all came to be requires delving into the history of Afghanistan and its occupation by the U.S.

Visiting Assistant Professor and Postdoctoral Fellow in History John Perry was willing to provide his insight and expertise on the history of the Middle East and the events leading up to the Taliban’s takeover of Afghanistan. Perry is currently teaching “The Long Road to 9/11: The United States in the Middle East, 1945 – Present,” a class detailing the history of foreign involvement in the Middle East and focusing on the role non-state actors played in the region’s history. Much of his work has focused on the region with his dissertation exploring the interactions between non-state actors such as the Muslim Brotherhood and Syrian refugees and their involvement with the U.S. government.

The Taliban’s formation goes back to the Soviet invasion of Afghanistan in 1979. The U.S. and other foreign powers—in an effort to weaken the Soviet’s control of Afghanistan—funded the Mujahideen, a coalition of armed guerrilla groups who fought against the Soviet Union. Pakistan also funneled money into various religious extremist groups within Afghanistan in an effort to avoid the creation of Pashtunistan, which would have been a homeland for a large ethnic group in the region known as the Pashtuns. If successfully created, Pashtunistan would have resulted in Pakistan losing much of its land.

U.S. forces invaded Afghanistan in 2001, occupying the nation and waging war against the Taliban for 20 years. Initially, the U.S. practically wiped out the Taliban in a matter of months after first invading Afghanistan. However, the Taliban was given an opportunity to regroup once U.S. attention was diverted to the invasion of Iraq. From then on, the Taliban has seemed to have an ever-increasing number of recruits, which Perry cites as a direct result of how the war was waged in Afghanistan.

“In both the wars in Iraq and Afghanistan, conservative estimates put the number of innocent civilian casualties at a couple hundred thousand, while more liberal estimates put it in the millions of [civilians] that are going to be killed by the wars in Iraq and in Afghanistan, which is going to be a key factor in the Taliban maintaining a presence and ultimately their takeover of the country,” Perry stated. “Every time the United States kills someone accidentally who is not a fighter who is not Taliban, their family is going to be more sympathetic to the Taliban. So even if [ the U.S] is taking out terrorists or Taliban members or Al-Qaeda, [the U.S] is creating too many new enemies. If they kill one enemy, but they accidentally kill two innocents, they just radicalized those two people’s family and friends. The war becomes un-winnable when you’re creating more enemies than you can take out.”

“Providing a timetable stating, ‘This is when we are going to leave’ tells the enemy, ‘This is how long we have to wait,” Perry stated.

An important question that has been asked regarding the takeover was whether it could have been avoided. Perry believes that there may have been an opportunity for a stable state to have been created.

“There is a reason why Afghanistan is known as the place where empires die,” Perry said. “Because no one has been able to conquer it. Alexander the Great tried and failed, the British tried and failed, the Russians tried and failed and now the United States has tried and has failed. I think there was an opportunity to create a stable state within the first couple of years of the [U.S] invasion of Afghanistan, but U.S attention was diverted to Iraq, and that was a crucial fundamental mistake in my opinion. But even then, I don’t know if it was possible in the long term for the U.S to achieve its objectives given how they waged the war.”

With the ramifications of the takeover having yet to be fully understood for the world at large, Perry suggests that readers who want to stay updated on how the takeover develops may want to stray away from American new organizations covering the topic.

“Gravitate away from American news media, whether that’s CNN or FOX News or any others,” Perry recommended. “Go with something else. Go with BBC, go with European news agencies because our news is just too diluted and there are too many agendas.” For readers looking to conduct more research on their own, Perry recommends the documentary “Restrepo,” a film detailing what life was like for U.S soldiers in Afghanistan and for Afghani civilians dealing with the U.S occupation. In addition to the documentary, Perry also recommends Taliban: Militant Islam, Oil, and Fundamentalism in Central Asia, a book by Rashid Ahmed.