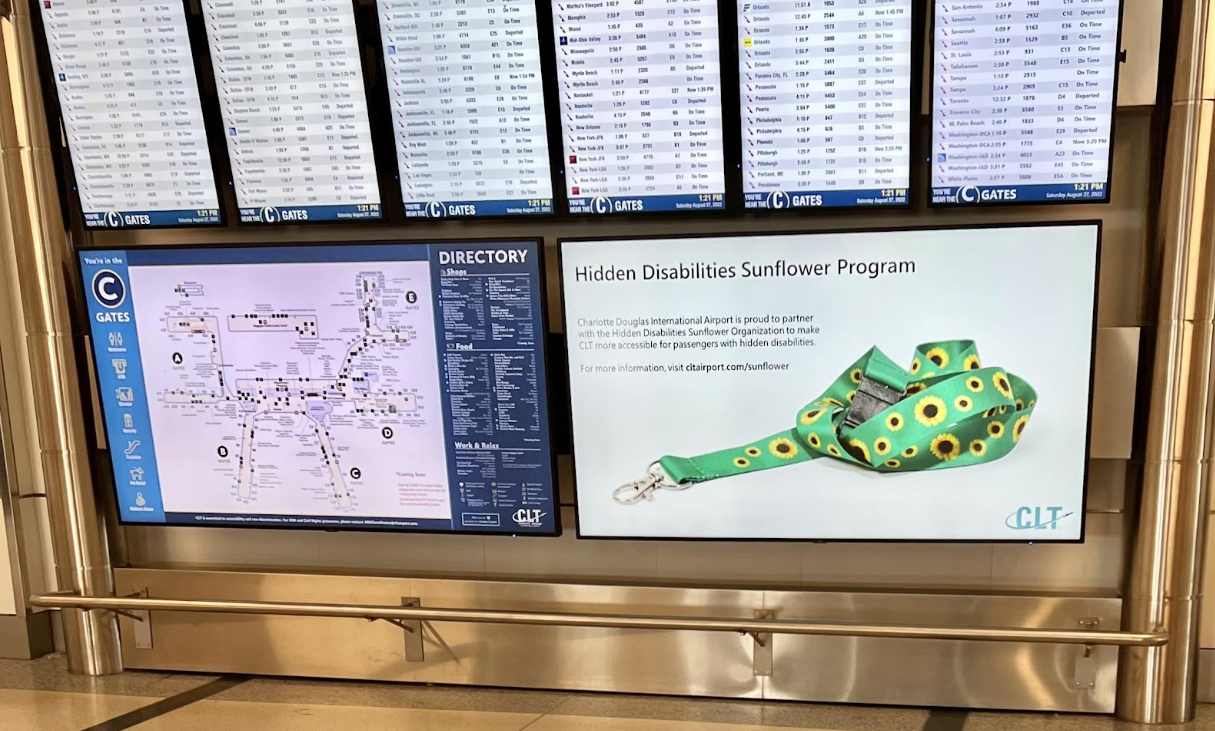 Created in 2016 by Gatwick Airport, the sunflower — usually accompanied with a green background — indicates that a person has a hidden disability and is a discreet sign that a person may need extra assistance. The founder of this symbol and cause is the Hidden Disability Sunflower Program, who explained the decision about the symbol.

“We chose a sunflower as it suggests happiness, positivity, strength as well as growth and confidence and is universally known.”

Some examples of disabilities that are classified as “invisible” in certain cases are autism spectrum disorder, attention deficit hyperactivity disorder (ADHD), celiac disease, narcolepsy, and dementia. The origin of this symbol comes from airports in the United Kingdom. The Hidden Disability Sunflower program states,

“There is no qualifying disability needed to qualify a person for the program. Instead, the sunflower lanyard program is for everyone and anyone that considers themselves to have a hidden disability.” The scheme continues, “Once you obtain one, you do not have to provide any proof of a disability, it is yours to keep forever and use for future travels, shopping trips and outings wherever the program is recognized.”

In the last six months of 2021, airports in the United States such as Charlotte Douglas International Airport, Miami International Airport, and Tampa International Airport have connected with the Hidden Disability Sunflower Program in order to instate the significance of the sunflower lanyards to all airport staff. These airports are providing those with hidden disabilities these lanyards free of charge, and airport staff are being trained to know how to assist a customer who is wearing the lanyard in order to understand how to help those with disabilities. Other countries besides the United States and the United Kingdom that adopted the sunflower lanyard include Australia, New Zealand and Ireland.

Misconceptions about the lanyard have arised due to the COVID-19 pandemic. Many disability advocates on both Instagram and TikTok have highlighted the behaviors of individuals who misuse the sunflower lanyard, giving it an alternative meaning to what it actually is.

Jess Chandler, under the name of @over_the_spectrum on TikTok, is an advocate diagnosed with both autism spectrum disorder and attention deficit hyperactivity disorder. In a passion about the misuse of sunflower lanyards, they have made two videos, the first video which depicts an interaction they had with a customer in a store, and the second video explains directly that it was never meant to be used as a mask exemption.

There is another red lanyard that is used for mask exemption that is entirely separate from the sunflower lanyard, Chandler states in a reply to a comment,

“Yes, and they are given the red mask exemption lanyard to wear. There is a big difference to not wearing a mask and having a serious medical event.” They continue, “. . . A new lanyard was created… for mask exemption.”

Another one of these advocates, @xtheateamx on TikTok, spoke in a video regarding those who are using the sunflower lanyard as a mask exemption as a response to the mask mandate throughout the United Kingdom. In the comments of his video, he stated,

“My criticism is people who are open about the fact they have got a lanyard simply because a mask is uncomfortable or a pain.” He replies to another comment, saying, “Just to be clear. I am not saying people shouldn’t wear these if they CAN’T wear a mask. I’m talking about the people who can but choose not to.”

In the disability community, this occurrence presents more difficulty for immunocompromised individuals who choose to wear a mask in public places, making them uncomfortable enough to feel as though continuously wearing the sunflower lanyard is useless in giving a prompt to others that they may need assistance. Additional advocates among the TikTok community who made videos on the matter include @kittennayru, @lyn.tics and @hollyvlogsofficial.

In order to show the original meaning of the sunflower lanyard, here are a few options to promote it in public places across the United States:

Some helpful ways to personalize a sunflower lanyard include pins that indicate the medical conditions it is worn for, a medical card with emergency contact numbers, house keys, some Loop earplugs, a stim toy or even a status square!