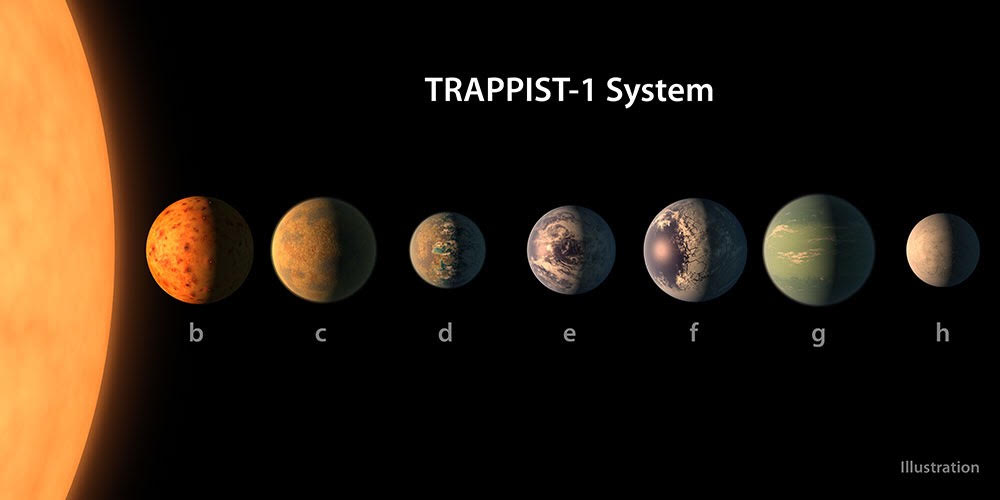 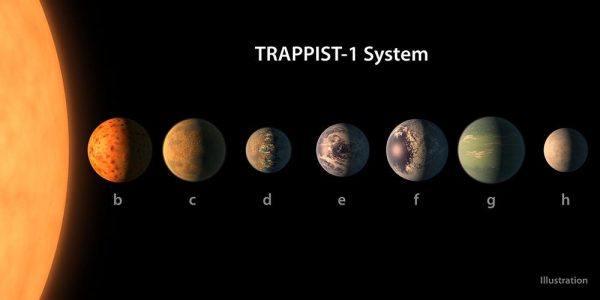 The National Aeronautics and Space Administration’s (NASA) Spitzer Space Telescope has identified not one, but seven new Earth-sized planets orbiting a dwarf star. All seven of these planets could potentially contain liquid water, but three are firmly located in the habitable zone – the area around the parent star where a rocky planet is most likely to contain water. The discovery sets a record for most habitable-zone planets found orbiting a single star outside our solar system and raises questions about the potential of extraterrestrial life.

“This discovery could be a significant piece in the puzzle of finding habitable environments, places that are conducive to life,” Thomas Zurbuchen, associate administrator of NASA’s Science Mission Directorate in Washington, said in the agency’s press release.

The exoplanet system, called TRAPPIST-1, is roughly 40 light-years — or 235 trillion miles — from Earth, in the constellation Aquarius. Its name comes from The Transiting Planets and Planetesimals Small Telescope (TRAPPIST) in Chile, where researchers first discovered three planets in the system. Using information from the TRAPPIST research, the Spitzer telescope confirmed the existence of two of the three planets and discovered five additional ones.

“This is the most exciting result I have seen in the 14 years of Spitzer operations,” Sean Carey, manager of NASA’s Spitzer Science Center at Caltech/IPAC in Pasadena, California, said in the press release.

The TRAPPIST-1 star is classified as an ultra-cool dwarf. This classification suggests that, in contrast to our sun, the star is so cool that liquid water could be found on planets orbiting very close to it.

Astronomers believe that the exoplanets may be tidally locked to the star. This prediction suggests that the same side of the planet is always facing the star; each side is either perpetual day or night. The weather patterns on these planets, therefore, could be completely unlike those on Earth. Despite funky weather conditions, astronomers believe that one or more of the exoplanets could be at a temperature that supports oceans and, perhaps, life.

“I think that we have made a crucial step toward finding if there is life out there,” Amaury H. M. J. Triaud, astronomer at the University of Cambridge and member of the research team, said in the release. “Here, if life managed to thrive and releases gases similar to that we have on Earth, then we will know.”

Researchers plan to continue the investigation of this exciting discovery in hopes of learning more about habitable planets. NASA’s Hubble Space Telescope, for example, has initiated a screening of four of the exoplanets, three of which fall inside the habitable zone. The screenings aim at assessing and interpreting the presence of hydrogen-dominated atmospheres around the planets.

Spitzer, Hubble and Kepler will help astronomers plan for follow-up studies using NASA’s upcoming James Webb Space Telescope, which will launch in 2018. The Webb Telescope is much more sensitive than others: it will be able to detect the chemical fingerprints of water, methane, oxygen, ozone and other components of a planet’s atmosphere in order to determine habitability.

“Answering the question ‘are we alone’ is a top science priority and finding so many planets like these for the first time in the habitable zone is a remarkable step forward toward that goal,” Zuburchen said.

Information from: www.nasa.gov and www.nytimes.com