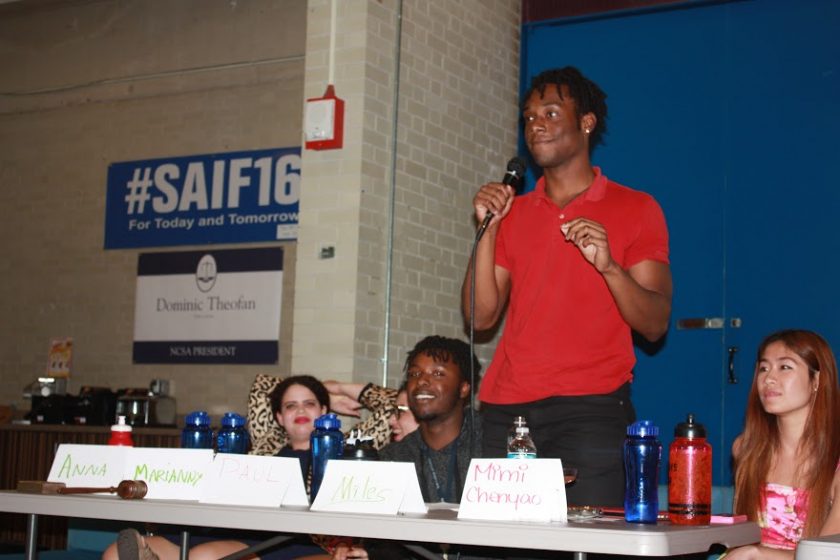 BY GIULIA HEYWARD AND BIANCA BENEDI

As a presidential term ends, one of the most momentous decisions that will determine the outlook for the rights of students in the years to come is happening as the entire world is watching – and it doesn’t help that the 2016 presidential elections are happening at the same time too. With the upcoming New College Student Association (NCSA) elections, a new crop of students will be making decisions for this community.

While Americans vote at the polls to determine who will be their president for the next four years, New College students line up to decide who will be the New College Student Alliance (NCSA) president for the 2016-2017 academic year. A shorter time-frame, to be sure, but nevertheless, presidential elections draw a crowd, and this one is no different. Campaigns occurred in surprising ways, with multiple drop-outs and write-ins to keep everyone on their toes. Here is how it unfolded.

Supervisor of Elections and second-year George Thurlow announced the start of the elections on March 25, sending out calls for petitions to any potential candidates.

Second-years Paul Loriston and Miles Iton were the first to announce their candidacy on March 29, a day after the petitioning period had started. Dominic Theofan followed on the 31st. Saif Iqbal announced his candidacy April 1, and Mimi Chenyao was the last candidate to throw her name into the ring, on April 2.

“I’ve been involved in Black History Month for two years which involves a lot of student planning and student organization, and I really got to see the amount of change students can initiate on campus on an individual level,” Loriston said. “And, from that point, I really developed an interest in initiating change not just on the Black History community but on a larger scale like the NCSA.”

Loriston had not previously served any position on the NCSA, something that he does not find to limit his experience. Even without an NCSA position, Loriston has been involved in numerous school projects, such as the Black History Month planning committee, the Day of Dialogue and the time he has spent as a Student Event Assistant (SEA) on campus. Iton, who also worked on the Black History Month planning committee, on the other hand, has also spent time on the NCSA as Diversity Representative as well as a full year as a Residential Advisor (RA).

“As a first year, I signed up because I really did want to make a difference and a positive change in the community,” Iton said. “I found out that a lot of the things I wanted to contribute I just couldn’t do in that role because, as you know, a lot of things have gone down just in the past couple of years with student deaths and also the arrests. I feel as if, right now, if there really is a way to influence positive change and take some theory to practice, I’m reading to take on the president’s role and do that practice.”

“We have very similar values but are also two very different people,” Loriston said, citing their different area of concentrations. Loriston is studying Economics while Iton is studying Philosophy. “I think it’s very representative of who we are as people. […] I think it’s dynamic, essentially.”

The duo are notably the only candidacy option consisting of co-presidents. Every other candidate ran on a solo platform.

“I think when the position is split, yeah, you can split the work, but you also end up creating more work for yourself,” third-year Saif Iqbal said about his decision to run as a solo candidate. “I think picking strong vice presidents and a strong Chief of Staff is more important.” Iqbal’s campaign relied heavily on his plans for his cabinet. “If you have a weak cabinet, you’re not gonna get stuff done,” Iqbal said.

Along with picking a strong cabinet, Iqbal’s platform included creating a new cabinet position to take some of the load off of the Vice President of Relations and Financial Affairs (VPRFA). Iqbal’s proposed new cabinet position, the Vice President of Post-Graduate Initiatives (VPPGI), would primarily focus on “bridging the gap between the CEO and the New College Alumnae Association (NCAA),” Iqbal said. This position would take advantage of connections and knowledge that Glen Van der Molen, the Assistant Director of the NCAA, has without having to sacrifice his own time, which Iqbal says is pressed. Iqbal has worked for the New College Foundation since his first year, participating in fundraising and setting up alumni events remotely.

Chenyao, who is also running alone, has been ready for campaigning for some time. “I’ve been wanting to run basically since I first got here,” Chenyao said. “I was the Student Allocations Committee (SAC) Representative and I really enjoyed it. It was a really cool experience to see how the school runs. This year, I become Student Affairs Representative and that was a lot of fun to see how decisions I make could influence the community.”

Chenyao notably collected signatures for her candidacy on an old dress of hers, which she had students sign before turning in.

“I think that I have a lot of experience with the general Sarasota community,” Chenyao said. “New College is such a wonderful community and the greater Sarasota area doesn’t engage with us too much. I thought it would be cool to join those two parties together.”

Chenyao cites the school’s recent performance on the state metrics, which have repeatedly placed New College in the bottom three, and her desire to address this in her presidency.

Chenyao is confident that she fits the bill to make a good president. “I have a really wide circle of acquaintances and I try to branch out as much as possible,” Chenyao said. “I feel as if I’ve gotten to know a lot of student body through various informal events and I really, really like here. I don’t think I’ve ever fit anywhere else. To be able to impact this school the way that it’s impacted me would be very cool.”

The Presidential Forum was the first event in which all of the candidates appeared together and was facilitated by Thurlow. The Forum took place on Monday, April 4th. It followed the Day of Dialogue, a school-wide event in which classes were cancelled for the day in order for the school to participate in an honest discussion on controversial topics on campus.

Fittingly, one of the first questions asked by Thurlow was on whether the candidates had attended the Day of Dialogue and, if so, what they thought about it.

“I think, out of the gate, I wasn’t as strong as I intended to be but, once I got into the swim of things, I was able to answer the questions effectively,” Theofan said. “I think I performed really well and answered the questions and played to the strengths of my platform.”

Candidates were asked questions that had been submitted online, as well as questions asked by attendees.

“I think they were really prepared or as prepared as they could be,” Theofan said on his candidates, citing that his understanding of the NCSA and his NCSA experience definitely showed.

In attendance were current NCSA co-presidents and third-years Shelby Statham and Paige Pellaton.

“I think that they were less prepared but I definitely think that the bar had been raised from last year in terms of what had been talked about previously,” Statham said. “But I do think some candidates need to really try to figure out how they consider basic concepts of humanity.”

This sentiment was shared by others.

“I think that, with all respect to the candidates, there’s been a considerate decline previously in general performance and the level of detail involved,” second-year Eli Barrett said. “I think that this debate was a better way of measuring basic public speaking ability than actual substance.”

Shortly after the Forum, Theofan dropped out of the race. The announcement was made on Facebook, where Theofan told his Facebook friends that he would not be attending the upcoming Midnight Debates.

Theofan was reached for comment on his dropping out and did not respond.

The event was attended by over a hundred students, easily quadrupling the attendance at the more serious Presidential Forum that had occurred the night before. Students heckled, called out questions, and interacted with the candidates playfully for the event. Student Court Justice candidate and current justice, third-year Allen Serrell, who was out of town, skyped in for the event.

The night wasn’t jovial for everyone. Iqbal was seen leaving the event early due to harassment by the student body involving posters of his being torn from the wall of Ham. Iqbal would later announce that he had officially dropped out of the presidential race due to harassment and criticism from other students.

“As a person who worked hard for years to overcome crushing social anxiety, depression and suicidal thoughts as a teenager, I want to thank the people of this school,” Iqbal responded when contacted for comment. “I’m back to square one.”

Half of the four potential presidential options were gone by election day. Second-years Mimi Chenyao, Paul Loriston and Miles Iton were the remaining candidates.

Polls opened at 9:00am. Students filled out the double-sided ballots that Thurlow had created. Many positions on the ballot were uncontested, and a dry erase board with write-in candidates next to the polling table was crammed with names from last-minute candidates. Thurlow and other NCSA volunteers manned the table all day, taking ballots from the poll’s opening to its close at 7:00 p.m. that evening.

Almost immediately following the elections, Thurlow and a team of volunteers began the arduous task of counting the ballots by hand. Votes had to be tallied for each position; every write-in had to be recorded (and with an overwhelmingly empty ballot, there were a number of write-ins).

And the night wore on.

Finally, at 5:27am, Thurlow sent out the formal announcement: 323 total ballots were counted. Iton and Loriston were the winners. The two of them had garnered 229 votes, a landslide majority unmatched in recent New College history. Chenyao came in with 68 total votes and Iqbal, despite having dropped out, had a total of 5 votes.

“I like the representation of bread,” thesis student Stefan Schalk posted on the forum.

Loriston and Iton will spend the rest of the semester learning the ropes. Their term begins on July 1, and when students return in the fall, it will be to a brand new executive cabinet. The race is over.