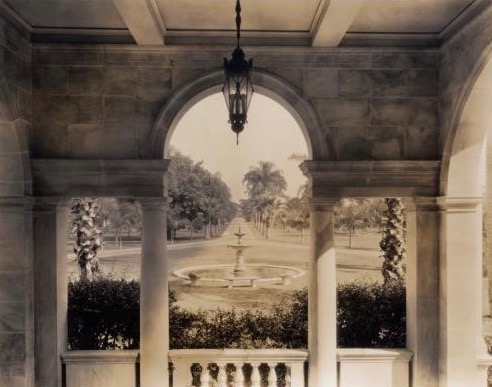 All photos courtesy of New College of Florida Archives.

New College of Florida was established as a private liberal arts college in 1960 but only joined the State University System as a public institution—as part of the University of South Florida—in 1975. Professor of Anthropology and Heritage Studies Uzi Baram has a good understanding of the campus history and even created a brochure with a focus on the heritage of the Charles Ringling Mansion. He emphasized that “the more that student, staff and faculty know about the history of this campus, the more connected they are going to feel to this campus.”

Baram explained that there are three tiers of history to New College. The three tiers start with the history of the natives which inhabited this area, then jump to the early development of Sarasota with the Ringling family and lastly transition to the history of the established institution that we all know as New College of Florida. Baram explained that the New College campus is “a part of a historic district which is from the early 20th century.”

Charles Edward Ringling was the living embodiment of the American Dream. The parents of the Ringling brothers immigrated to the United States from Germany. In 1884, the brothers banded together to establish the Ringling Bros. Circus. They started their small touring company of performers, transforming their vision into one of the biggest names in the circus industry. By the 1930s, the Ringling brothers were among the top American entrepreneurs of the time.

In 1912, Charles Ringling found himself in Sarasota, a small, simple town with a subtropical terrain that had agricultural potential and commercial opportunity. One of Charles’ brothers, John Ringling, and friends, Ralph Caples and Charles Thompson, encouraged Charles to start a home in Sarasota, along with developing winter grounds for the circus. Baram explained that the driving force for the remaining members of the Ringling family to relocate was the status that the Ringling name held among elite social circles. Although the Ringling brothers were well-established entrepreneurs, they were not respected by Midwestern society. Labeled as “circus folk,” the social elites did not approve of the manner in which the Ringling family accumulated their wealth. Sarasota was a place of opportunity, a place where the Ringling brothers could reinvent themselves as the social elite.

In an attempt to relabel the Ringling family to elite status, Charles Ringling invested in a more permanent home—what we now refer to as College Hall. Unfortunately, Charles Ringling passed only a few months after the final project was completed in 1926, and the home was left to Charles’ wife, Edith Ringling.

During the time the Ringlings were the inhabitants of the estate, the south wing—now actively used by students and faculty on campus—was divided into separate master bedrooms, bathrooms, dressing rooms and a shared reading room for the couple. Downstairs, there was the Music room, the Dining room and the Pompeii room. The Music room had various purposes throughout its existence, but for the Ringlings it was used as a dance hall and a performance area. The Dining room was used for Edith Ringling’s infamous dinner parties, while the Pompeii room served as the billiards room.

After Charles’ passing, Edith lived alone in the otherwise empty Ringling mansion until her death in 1953. The property was handed down to a series of private owners until finally, it fell into the hands of New College.

Information for this article was gathered from ncf.edu, biography.com and Baram’s College Hall Brochure.