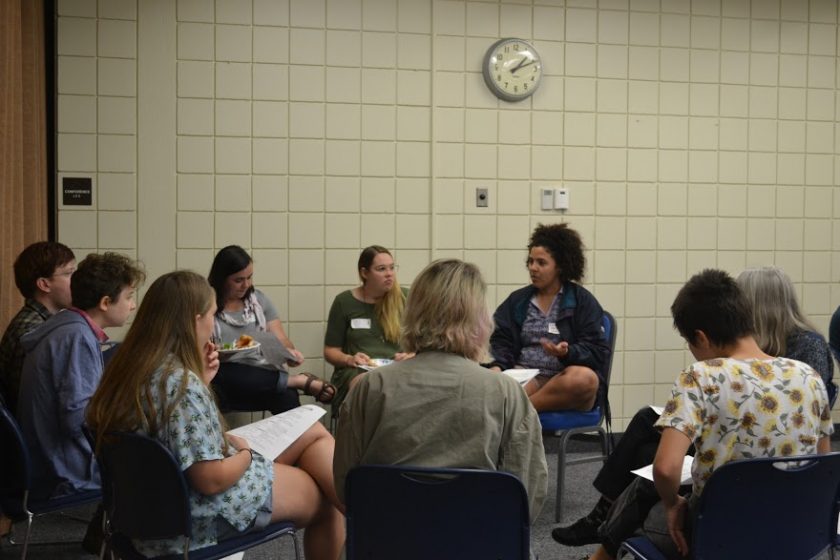 It was a rare occasion for all classes to be cancelled on the same day. And among those who chose to sleep in or catch up work, others managed to get up bright and early and shuffle out of their dorm rooms to attend the event that was the reason for these cancelled classes to begin with.

This was the Day of Dialogue, an event that had been in the works for months and finally came on Monday, April 4. As students, staff and faculty piled into the building, there was a sense of nervousness and fear as individuals sat down at tables with their peers. Attendees ranged from area of concentrations to years spent on campus and, more importantly, ranged in race, ethnicity, socioeconomic background, gender identities and sexual orientations. New College President Donal O’Shea could be seen at one table while Campus Life Coordinator (CLC) Vanessa VanDyke was at another.

“There have been a lot of lower years stepping up and taking a voice and hopefully the word will spread,” third-year student and NCSA Co-President Paige Pellaton said. Pellaton helped with sign-ups in which attendees not only checked in but were also given name tags where they could place their name, position on campus and pronouns.

Leading the event was Micah Hobbes Frazier, the event’s facilitator. Frazier, both noticeably barefoot and at-ease among the nervous energy in the room, spent the day speaking with the room, leading discussions and checking on individual groups.

Before launching into the first discussion, Frazier made a point to address discussion rules and the importance of pronouns and introduce members of the Counseling and Wellness Center (CWC) staff. Throughout the entire day, anonymous texts could also be sent in.

“Please just participate and try to be as present as you can,” Frazier told the audience. “But also remember to take care of yourselves.”

Frazier also told the audience to be aware of dynamics in the room, and that this was not an impression-free zone. It was important for those participating in the event to respect both confidentiality and privacy.

Frazier introduced the idea that every individual has a particular shape. This shape is influenced by family and intimate networks, community, institutions, social norms and an individual’s spirit or nature. According to Frazier, shape is defined by the self and how it interacts and relates to the world. These interactions become conditioned tendencies and these conditioned tendencies that people exhibit are the survival strategies that later become habits.

“There is this desire to learn and grow and become an inclusive community,” Frazier said when asked to describe New College’s particular shape. “Having some sort of structured conversation is going to be really helpful and really useful.”

Frazier had each table break that barrier and discuss what exactly they were hesitant or nervous about before having the tables break off into groups to discuss the shape of New College. These groups then presented these shapes to the rest of the room which manifested into comical sketches of students running around frantically on stage wearing signs with the words “institution” or “violence” placed on their shirts.

“I feel as if, before this was happening, I was part of a group of students who were frustrated at the lack of administrative response to what was happening,” second-year Leen Al-Fatafta said. “I’m really glad that a lot of students showed up. We also had a lot of representatives from different clubs on campus.”

According to Professor of Philosophy April Flakne, these events included the sexual assault posters that were put on campus by the now trespassed Carlos Marcio Ramirez and the student arrests that had occurred at both the beginning and end of the fall semester. Other acts involved anti-semitic vandalism and general microaggressions that multiple people of color on campus cited as making their experiences on campus extremely difficult.

This semester, Flakne also taught a Diverse Dialogues course focused on the intersection of freedom of speech with campus discussion. During the Day of Dialogue, students in this class lead group discussions on how to navigate conversations on controversial or sensitive topics.

“There were so many people who had a part in this,” third-year Christina Harn said. “We weren’t an official committee. We would meet on Fridays and do work outside of that. I think that there is a desire for New College to be proactive rather than reactive. This is different than other campus wide organizations because we really wanted a space to facilitate a conversation.”

One of the efforts implemented by the planning committee was to have two chalkboards in prime locations on campus where members of the community could write their views on topics such as what diversity meant here or what needs to change.

During the panel, which included individuals such as Pellaton and CWC counselor Duane Khan, topics written on the chalkboards were photographed so that they could be unpacked by members of the panel.

There was one particular incident in which “Black Lives Matter” has been repeatedly crossed out and rewritten before an anonymous individual chose to write the phrase in permanent paint on one of the chalkboards.

This particular incident evoked such a response from the community that the panel spent the majority of their time focused on this one incident.

The event did run longer than expected, with Flakne’s Diverse Dialogues students having a shortened time to talk to students. This was not the only shortcoming to the event.

According to several members of the Day of Dialogue committee, administration had agreed to pay for food for the event. However, as the day approached, administration then said that funding was up the NCSA which, due to the short notice of this change, did not include food in the budget. After several members reached out to different clubs and organizations on campus, these people were able to use funds from their discretionary to pay for catering.

“There was an understanding that administration and Student Affairs would be the primary agent for funding,” Al-Fatafta said. “They didn’t follow through and then communicated that the NCSA would cover the costs.”

“It’s important to have the community come together,” O’Shea said when asked about his experience at the Day of Dialogue. “I am thrilled that it was so successful. I think that there are things that concern administration and students. I don’t think that we know what is going on in either group.”

O’Shea was contacted to comment on the catering miscommunication and did not respond at the time of print.

Several students also pointed to the issue of the event catering to whiteness, with some of the questions posed focusing on white privilege, or how to navigate a conversation from the perspective of an individual who is not a person of color.

“We don’t have conversations like these when the campus climate is pretty neutral,” thesis student and NCSA Vice President of Diversity and Inclusion Raina Senae said. “When we have events like these they are reactionary so we are reacting and trying to play catch-up to what has already happened. We need to work on being more proactive.”

“Our community needs to work on being totally acceptable,” second-year NCSA Co-President Elect and Diversity Representative Miles Iton said. “New College has a comfort zone that we need to stretch out of. We need to not be exclusionary about our revolution.”

The idea that those who attended have become more and more equipped to deal with the community was shared by others.

“Sometimes our brilliance is not that unique,” Chapellin John Walker, a member on the panel said referring to New College’s uniquely brilliant slogan. “I hope that those who came here understand that they have the ability to be the catalyst for social change.”