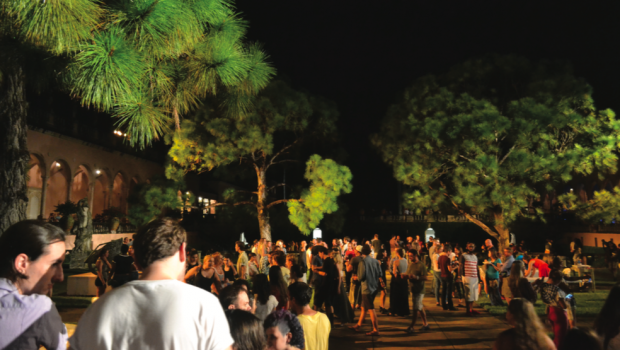 Ringling Underground resumed its 2016 season after a one-week delay brought on by Hurricane Hermine’s arrival. Originally intended to begin on the first Thursday of the month, the event occurred the evening of Thursday, Sept. 9 and featured local musicians, free tacos, and only slightly less rainy weather.

Ringling Underground occurs the first Thursday of Sept., Oct., Nov., Feb., Mar., and Apr. The event was created by Shakira Rejos, a local community member who is heavily involved with Sarasota’s arts community and the promotion of LGBTQ+ rights in the area. From the beginning, Ringling Underground was created with students in mind, with Rejos working with Ringling’s museum and education departments in order to devise an event that would both entertain and inform.

“The goal was to get more college students on campus,” Rejos said. “A big problem at the Ringling museum was that membership levels were really really high for people in their 70s and 80s, really really high for 50s to 70s, and then they started to drop in their 40s and for the 40 and unders it was basically nonexistent. The strategy was to try and figure out ‘Where is the disconnect?’ ‘Why aren’t college students and young adults more interested in coming here?’ The answer was pretty easy, there was no shit for them to do.”

One of the biggest issues Rejos faced with the event’s conception was the perception of college students by Ringling’s upper management.

“The Ringling is part of FSU, so it’s bureaucratic as fuck,” Rejos said. “Trying to get partnerships between Ringling and the community, you have to sign all of these contracts, so some of the policies had to be looked at and re-evaluated. There were all these questions that had to be dealt with. ‘Can we serve drinks?’ ‘What if they come in barefoot?’ Security was very concerned about students smoking pot in the galleries.”

Ringling Underground first began in Feb. of 2012, with Rejos and Shannon Fortner – of the Harvey Milk Festival – and a local producer involved in the event’s development.  For the first three events, the Ringling had each of them pick one and focus on a specific type of musical style and theme. Rejos’ genre was hip-hop, Fortner’s was more electronic, and the local Sarasota promoter focused on alternative rock.

“We wanted to see what would connect, what would work. The first three months were really an experiment,” Rejos added. “We figured out that hip hop definitely wasn’t the way to go – even though it was fun – and Mikey wasn’t the right promoter for the event, so we picked Shannon and she’s been curating the music ever since.”

One of the event’s central goals was to share more progressive and contemporary arts and culture with the larger Sarasota community and to emphasize Ringling’s identity as a public space for discussion and community.

“I think [the Ringling] provides a really safe space,” Rejos said. “I like to think about the fact that like you can like take a date there. That was always my goal, just to get like mad girls over there. I always wonder if any babies have been created because of the energy that that evening brings. You can just like bring a date there, you can mess around with your friends, you can do whatever you want. All you have to do is be excited about art. That’s something that is not very available in Sarasota.”

Another purpose Rejos had for the event was to draw in young people, college students and young professionals, who would maybe consider making Sarasota their home long after they’re graduated.

“I wish that other arts organizations would take more steps to do outreach. We want Sarasota to be a place, not where people just love to visit or love to go to school, but we want young people to stay here and make it a better place than it is now. I think Ringling Underground was a good start, I wish other arts organizations would try and you know take the same steps.”

Last Thursday’s event featured three electronic and rock bands from Florida: Cassolette from Sarasota, Soapbox Soliloquy from St. Petersburg and TOMBOi from Jacksonville. The Ringling’s Center for Asian Arts, which opened last May, was one of the galleries open to the public for the event. The Center features art from a broad selection of Asian countries, with a focus on pieces from China, Japan, Korea and Tibet. The museum’s vast selection of Chinese blanc de chine was on display (the gallery was not yet finished when the Asian arts wing opened last spring) as well as an open-air light installation, the Joseph’s Coat sky space by American artist James Turrell.

“Sarasota is an amazing place for art and culture,” Rejos said. “It’s just like an incredible place to grow up. I’ve spent half of my life here. But it’s very focused on classical arts – there are classical arts everywhere. There are not that many organizations that are concerned with progressive art, and the Ringling underground took the step to invite people to share art from their perspective. Shannon Fortner provided a platform for progressive musicians to come and play there. You don’t get that at many other places in Sarasota. That, I think, is probably the greatest thing about Ringling Underground.”