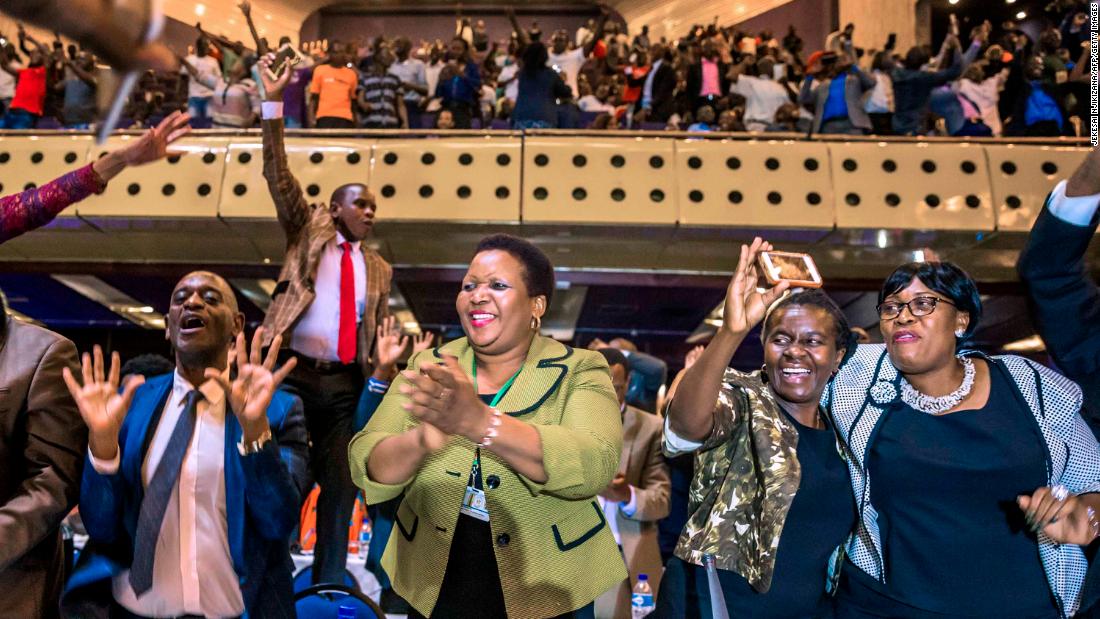 Zimbabwe's members of parliament celebrate after Mugabe's resignation on November 21, 2017 in Harare. Robert Mugabe resigned as president of Zimbabwe on November 21, 2017 swept from power as his 37-year reign of brutality and autocratic control crumbled within days of a military takeover. The bombshell news was delivered by the parliament speaker to a special joint session of the assembly which had convened to impeach Mugabe, 93, who has dominated every aspect of Zimbabwean public life since independence in 1980. / AFP PHOTO / Jekesai NJIKIZANA (Photo credit should read JEKESAI NJIKIZANA/AFP/Getty Images)

The Zimbabwean government is facing a military takeover, although the army refuses to call it such. Soldiers reportedly took control of the state broadcaster and blocked access to government offices on Wednesday, Nov. 15. The citizens of Zimbabwe will likely be under a transitional government in the days to come.

Amidst the power struggle, 93-year-old President Robert Mugabe of Zimbabwe is safe, but has been put under house arrest. Mugabe has held the office of the presidency since 1987 and has had only one predecessor who served from 1980 to 1987, after Zimbabwe gained independence from the United Kingdom. During that seven-year span, Mugabe served as the Prime Minister.

Following their 2013 election, when Mugabe was reelected to serve his seventh term, he had been clinging to power due to the unrest of his constituents surrounding electoral violence. On Nov. 6, Mugabe caused unrest by firing the Vice President so that his wife could succeed him.

Mugabe is resisting pressure by Zimbabwe’s military to publicly resign. According to the Financial Times, Mugabe has met with a South African envoy consisting of two South African ministers and with Constantine Chiwenga, the Zimbabwean army commander who led the coup. The Guardian reported that South Africa is appearing to back the Zimbabwean army and seeking to negotiate the terms of Mugabe’s resignation.

The South African Development Community (SADC) urged against this unconstitutional change in government and held an emergency meeting in Botswana. President of South Africa and chair of the SADC, Jacob Zuma, called for the meeting out of concern for what political turmoil in Zimbabwe would mean for the neighboring South Africa.

In recent years, Zimbabweans have already fled to South Africa in thousands due to the economic instability, Zuma’s concern lies with what this political unrest will lead to. On Sunday, Nov. 19, Zimbabwe’s ruling party has given Mugabe until Monday to resign or face impeachment.