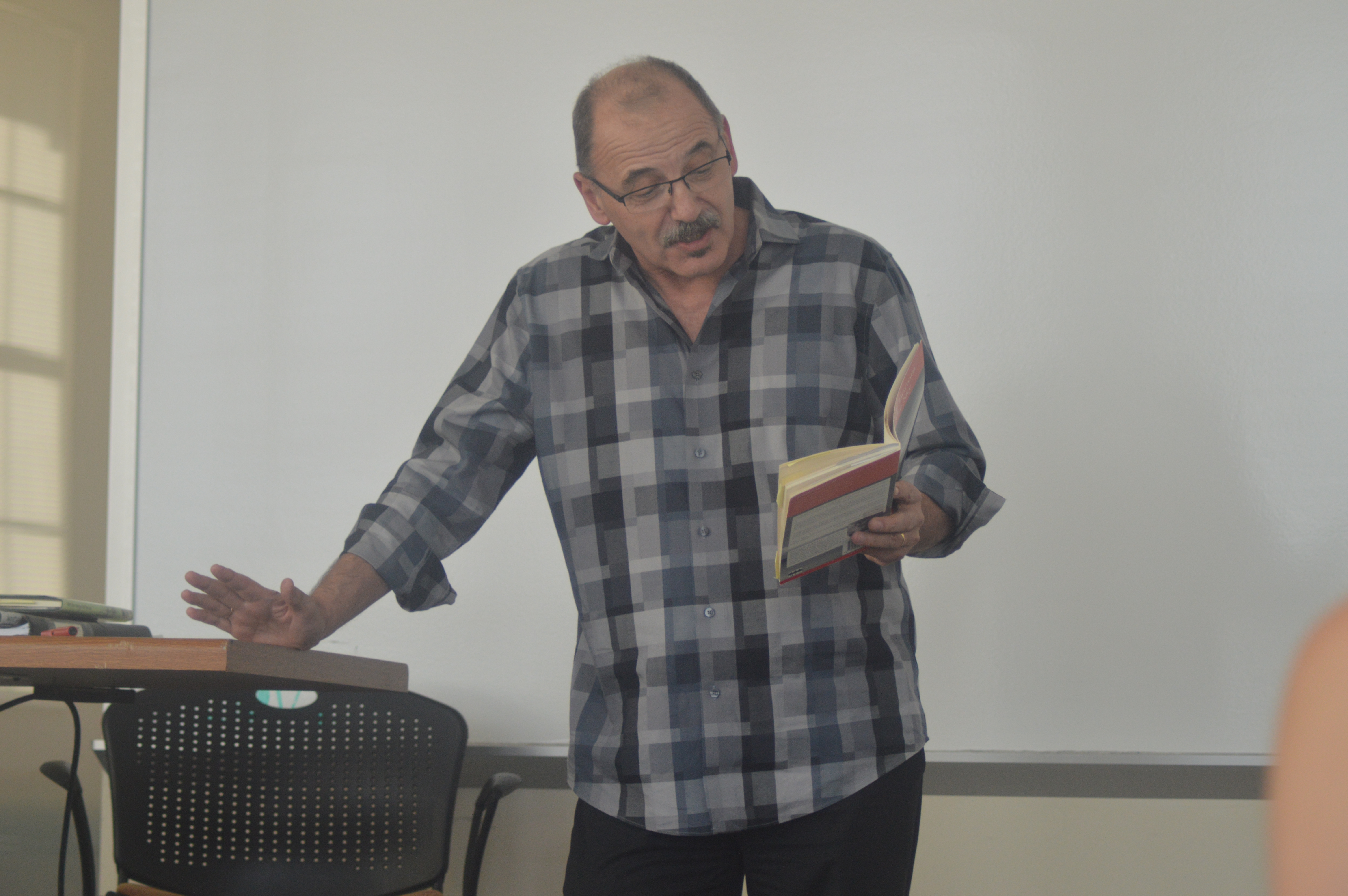 At the event, Donald Morrill read some of his works while addressing the theme of place to a captive audience of student writers.

Blue-star houses, Britney Spears’ boobs and the Flash were only a few of the topics discussed at the poetry reading held at New College. The event took place in a room which Creative Writer in Residence and visiting Professor, Reginald “Reggie” Young called the Sky Room: a small corner room on the third floor of the Academic Center of Excellence (ACE) building.

The theme of the reading was place. Place could mean anything from a physical location to an imaginary hole in the wall or, to a place buried deep within a person.

Guest poets Ryan G. Van Cleave and Donald Morrill read works, which they thought exemplified the theme of place, at the event.

Van Cleave was raised in the Chicago suburbs. He has taught at several universities throughout the United States including Florida State University (FSU) and Clemson University. Currently, Van Cleave is a professor of Liberal Arts at Ringling College of Art Design (RCAD). He is also a contributor at Scene Magazine, a monthly Sarasota and Bradenton magazine meant to connect the community through engaging and relevant content.

At the reading, Van Cleave read poems from multiple poetry collections including the “Magical Breasts of Britney Spears,” which he is infamous for.

“Instead of Aphrodite, we have Britney Spears, or whoever we have now,” Van Cleave said before reading the poem.

Featured alongside Van Cleave was Donald Morrill. Morrill is a poet and nonfiction writer who has written four books of nonfiction: Impetuous Sleeper, The Untouched Minutes, Sounding for Cool and A Stranger’s Neighborhood – along with three volumes of poetry.

Morrill read many poems at the reading, however, the start of the show was the Blue Star Home.  Morrill suggested that this particular poem hit the nail on the head with regard to the theme of place. This place was his hometown of Des Moines, Iowa, where there is a tradition where a blue star is placed in the window to let people know that the house is safe from whatever troubles lay wait outside.

After both poets had their turn at reading their work, there was time for a Q&A session. Morrill and Van Cleve were asked questions about their poetry and focus, including a question about separating place and time.

As they wrapped up, Young asked Van Cleave and Morrill if they’d like to read one final piece to wrap the night up. Van Cleve asked the audience if they would rather hear about the Blue Man Group or about Bert and Ernie, the Sesame Street stars, which are both subjects he has written poetry on. The audience voted for Bert and Ernie.

Then, Morrill read from an unpublished manuscript to lighten the mood before offering a free copy of his book, Impetuous Sleeper, to the students present.

“Usually, you’d have to pay for these,” Young commented as Morrill handed out signed copies of the book.

However, Morrill explained that he was forced to buy the remaining copies from the publisher to save them from the paper mill. Getting his work out there was more important to him than money.