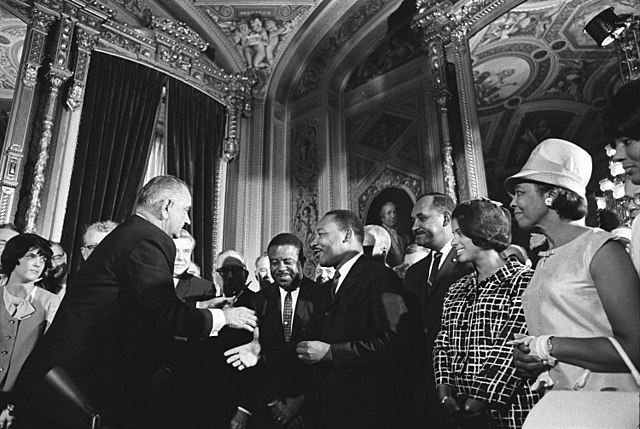 President Lyndon B. Johnson meets with Martin Luther King, Jr. at the signing of the Voting Rights Act of 1965.

The Law Society held their first major event discussing felon voting rights. The meeting covered the history of jurisdiction in executive clemency decisions in the state of Florida and the passing of Amendment Four, also known as the Voting Rights Restoration For Felons Initiative.

As of 2018, Florida is one of four states—alongside Iowa, Kentucky and Virginia—where convicted felons do not regain the right to vote, until and unless a state officer or board restores the individual’s voting rights. The meeting discussed Florida’s previous process for clemency decisions, shaped by the governor at Rick Scott, discussing a specific lawsuit where the governor was sued by U.S District Judge Mark Walker appointed by the Barack Obama administration, deeming it unconstitutional. The ruling was later overturned on appeal.

Third year and President of the Law Society Evan Hunter explained, “A lot of folks, when they read about law they read about supreme court rulings, love to read the rulings that expand voting rights, individual liberties—things reminiscent of the first amendment. But it turns out that it is just as important to read rulings on executive power. Because a lot of these lawsuits came down to is the court essentially saying that the state executive, the governor, has choices how these laws are implemented and we as a court can’t stop him from doing so.”

The meeting moved on to Amendment 4 that served to free disenfranchised people to finally vote in the state of Florida. However, majority Republican legislatures moved to define what serving a sentence means that following year. Under the support of Governor Ron DeSantis, lawmakers decided that folks with felonies are required to pay unpaid fines before being eligible to vote.

“What happened, of course, is the Republicans decided that, yes, they can not violate this new law but what they can do is say you have to pay all your court fines and fees before you have your voting rights restored,” Hunter said. “So that is there was to essentially curving voting rights for felons even after they technically restored their voting rights.”

“That’s why people like Michael Bloomberg have donated funds to Florida. Because they want them out in the polls,” Hunter said.

In the 2020 election, New York City Mayor Mike Blooomberg donated $16 million dollars toward the Florida’s Rights Coalition to help pay the fines and court fees of Floridians with felony convictions in hope to push the Democratic vote.

Florida has the highest proportion of disenfranchised voters compared to all other states. Over 10% of the potential electorate in Florida is ineligible to vote because of felony convictions.